Last week when I announced the birth of my daughter, I mentioned that she had been pre-screened for the BRCA1 mutation 185delAG which would have conferred a 60% lifetime risk of breast cancer. For those not particularly up on finer workings of cancer genetics, I thought that might warrant a little further explanation. Artist impression of a person without working tumour suppressor genes

BRCA1 and BRCA2 are genes which code for proteins that play a role in the repair of chromosomal damage and are part of the tumour suppressor gene family. Essentially these genes create proteins whose entire function is to stop cancers, so having them somehow broken kind of has an obvious effect. Although to be fair, lots of things are obvious after years of very expensive, dedicated research by a plethora of people with a combined IQ that can only be written with scientific notation (<- nerdiest joke I’ve ever made) .

There are innumerable mutations of the BRCA1 and BRCA2 genes that have been reported but there are three common mutations that together account for ~80% of all the hereditary breast cancer cases. These mutations are collectively known as the Ashkenazi mutations named because they are commonly associated with people of Ashkenazi Jewish ancestry and are thought to be the result of the ‘founder effect’. The ‘founder effect’ simplistically is where a mutation arises in a small initial population which then is either geographical or ideologically isolated in such a way that they don’t typically breed with other populations. This means that any defects/traits found in the initial population tend to be then very common in the subsequent population. In the general population around a 1 in 800 people have a BRCA1 or BRCA2 mutation, in people with Ashkenazi ancestry it’s 1 in 40.

Just to set the risks associated with BRCA mutation in some perspective, women with a working BRCA1 and BRCA2 genes have a lifetime risk of around 12% of developing breast cancer and a 2% risk of ovarian cancer.

It is worth noting that most of the stats I’ve quoted above are for women (clue: men don’t have ovaries) this is due in part to a sampling bias, the incidence of cancer in men with BRCA1 and BRCA2 mutations has not been as well studied. However, what data is available seems to show that men with either a BRCA1 or BRCA2 mutation have an increased risk of developing prostate, breast and pancreatic cancer. Interestingly in men the highest risk is associated with mutations to the BRCA2 gene which is counter to risk in women. It is worth adding that pretty much every paper I could find on male risk associated with the BRCA genes concluded with a variation of the sentence “we don’t have enough data, this needs further study”. There are several studies that are are looking at women with BRCA mutations but despite quite a bit of searching I couldn’t find anything for men, which possibly explains the lack of data. But there is more information on risks here.

As I talked about last week, my wife has the Fido mutation as did her mother (probably) and a little family tree work by my mother does show that my wife is related to a group of Ashkenazi Jewish migrants that arrived in the UK in the 1700s. Given that she has this mutation she is now being regularly screened via annual MIR scans (mammograms don’t work well for women under 40 due to the structure of the breast tissue) and at some point may even decide to pre-emptivly have a double mastectomy (see recent news coverage of Angelina Jolie) and possibly a oophorectomy. Although this second one is firstly, pretty life changing (it’s essentially instant-menopause) and secondly, recent work has shown that people that have had oophorectomys tend to have lower long term survival rates. This is thought to be because the removal of the ovaries decreases the estrogen levels which can prematurely lead to osteoporosis and cardiovascular disease. Although this can be offset with hormone replacement therapy.

Thankfully for us however, this is not a problem that our children will have to deal with. Thanks to some amazing science the Fido gene in my wife’s branch of the family tree has been stopped. If anyone is any doubt as to the impact genetic research and embryology can have then I think ending countless generations of suffering and pain due to a faulty gene is a pretty good example of why science rocks!

I realize that this post is quite old, but am hoping it is still active. I am a Fido carrier, and I found out because I developed breast cancer at 31 years old. I did fertility preservation before chemo and am left with very low fertility after treatment. I had three embryos and I tested them, one was BRCA1-ve and two BRCA1+ve. The BRCA-ve embryo was implanted first and did not survive. I now have only one way to have a child of my own, but it would mean that they carry the mutation.

My question is this, did you or your wife have trouble with the idea that if PGD was done on her, that she may not exist if her BRCA1+ve status was chosen against?

Hi Jenifer,
Even though it’s an old post it still attracts excellent questions clearly 😉
I think it’s probably better if I leave it to my partner to answer. I’ll let her know about your comment and hopefully she’ll get back to you 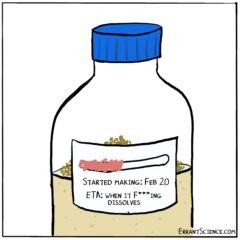 Buffering while making a buffer

In my lifetime as a researcher I have made more buffer solutions than I’ve had hot baths. That is to say that, if all the water from all the baths I’ve ever had was compared Read more… 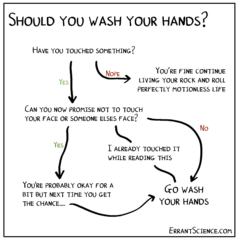 In the first lab I worked in I had a colleague that taught me an introduction to basic lab health and safety. I was lucky to have someone go through it all with me as Read more… 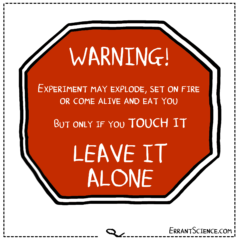 Passing a heath and safety inspection: a terrible guide no one should follow