How to: Use a Raspberry Pi Camera Warning: This post is not be used to take ‘selfies’ with a piece of raspberry pi

Now, much like everything else I ever do on Raspberry Pi, using the camera module requires browsing 6 different how to guides and trying to come up with some combined version of events. So to help out others, I’ve prepared my own little how-to, trying to bring all that I’ve learned together.

This is pretty simple to be honest, the most important thing to remember is that the CCD is sensitive to static – so don’t do this while wearing your favourite synthetic fleece and earth yourself before picking anything up (touch a radiator or pipe).

The Camera consists of a bulky circuit board and a thin ribbon cable. If you can’t work out which one of these needs to be plugged in then I suggest you return the camera to sender, as you are clearly out of your depth. 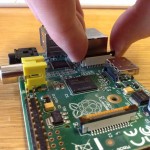 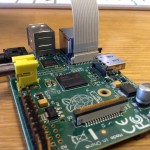 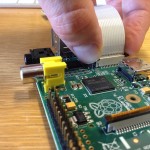 I am going to assume that you have a Raspberry Pi ready to run with a brand new SD card with Raspbian on it. If you don’t then go to this link, download NOOBS, install it to an SD card, install Raspbian then come back here.

The camera has two distinct modes – video and stills. I won’t bore you with a long technical explanation of the differences (because monkeys with a basic grasp of language can probably work that out!) but it is important to note that these modes represent the two core commands for running the camera.

These commands are the prefix for a range of additional options. At the end of step 2 for example, I used the command raspivid -d : the -d there denoted running the camera in demo mode. All of the commands are documented in some detail in this document and to be honest I can’t clarify or summarise it better than the authors have already done. To give you a flavour of the sort of commands you can construct, below is the one I used for a time lapse series of photos.

As lovely as the RPi camera is, it’s not perfect. In my playing with it this week, I’ve discovered that it’s a bit of a pain to make run on start-up; the exposure time is capped at 1/3s; and there are some weird bugs. I may post again on how to solve some of these for specific applications when I manage to actually sort out sensible work arounds.

[…] would like to do a few more ‘How to:‘ guides as well as reviews of things like STEM books and apps but I will try to make these […]