A while back XKCD (if you haven’t heard of XKCD and you are using the internet then I can only assume you have previously only been browsing underarock.com) ran a comic on using the 1000 most common words to explain things. It was so good that a whole host of other people went out and did the same for complicated things that they work with. And like any blogger, I have noticed this bandwagon and am now jumping on it.

To aid me in this task, I used the excellent online script Up-Goer Five Text Editor which very helpfully picks up on any un-common words – without which I would have spent hours reading the lists and repeatedly checking my text. Below is the description of my current project, I have played a bit fast an loose with grammar to make this work. 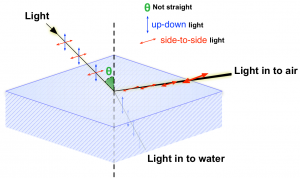 At the moment my work is to build a new way of seeing a layer of stuff on water or glass. The new way I’m working on will be less money than other ways – meaning more people can buy one. This way of seeing works using light, which hits the skin of the water-not-straight. The light used is made of two types of light – side-to-side and up-down light. Up-down light goes into the water and is not returned into the air; side to side light goes off the water in to the air. When stuff is on the water the up-down light does not go into the water but comes off into the air. We can then look for this up-down light which can then be turned into a picture of the stuff. Normal ways of looking at stuff like this don’t work because there is only a tiny bit of the stuff which is too small to see.

I hope that eventually this can be made for few enough monies that more people can use this way of looking at stuff and so that we can share this less-money way with schools which can help kids learn about looking at tiny bits of stuff.

But I thought to myself : why stop there – wouldn’t this be even better communicated using not just the 1000 most common words, but how about only using words on the Swadesh list. For those who haven’t just googled it, ‘Swadesh’ it is the core words/concepts that form the basis for almost every language, there are many variations of this list but the one I used is one of the longer ones and is 206 words long. Any grammar rules have now been abandoned, otherwise this just wasn’t possible. 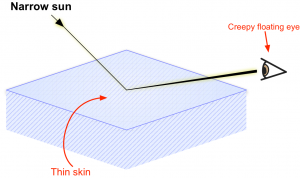 A diagram of Brewster’s angle as described used Swadesh words. WARNING following this diagram will probably make you blind

With narrow sun at water thou sees water’s thin skin.

But again I can go further than this, a recent paper in PNAS (paywalled but i’ve made a copy of the list available here) has suggested that there are actually a group of so called ultra-conserved words which sound broadly the same now as they did ~15,000 years ago. Surely using these words to describe my work will make it even more accessible than the previous two methods. Not only will this be understandable in several languages, but also to people born 15,000 years ago – which is obviously very important if we were to invent a time machine and then, for some as of yet incomprehensible reason, want to explain Brewster’s angle to them. For this example, not only have I had to ignore grammar rules, I’ve also had to stretch the definitions of words to essentially make them completely different words. 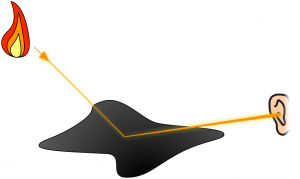 Diagram of Brewster’s angle as described using only words conserved over 15,000 years.

Thou give fire to hear what black flow

What could possibly be clearer than that right? Well probably almost anything, although to be fair all three of these descriptions are basically nonsense and clarify my work about as much as sticking my head in a bucket of mud. I think I am starting to believe that communicating well is not necessarily about choosing words that we all can understand but explaining new concepts and words without being overly technical.

I would love to see a online script that doesn’t simply give you a list of words to use but analyses your words and suggests simpler but equally descriptive terms. Many a journal paper is essentially illegible thanks to needless use of overly long words where simpler phrases would do just as well. Like anything, it just requires a little thought and consideration that not every one has had the exact same education/experience as you.