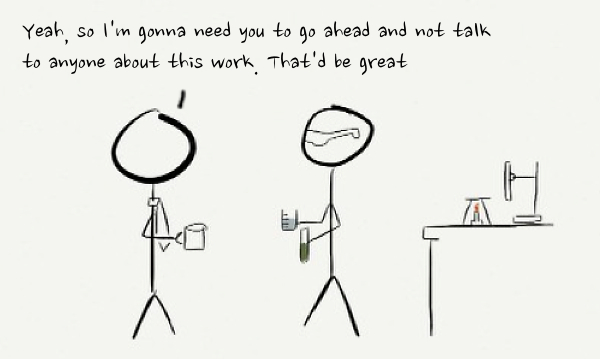 I confess – I’ve not been very open of late; which as I’m running a self-described ‘open science blog’ is a bit of a fail. Essentially, I’ve been finding it hard to discuss things that are part of on-going commercial negotiations for fear of accidentally screwing something up.

Normally, when I start projects either within the university or with companies, I make sure that I talk to everyone at the kick-off meeting about what everyone is happy sharing. Mostly the reply in academia is ‘go for it!’ because the majority of people want the project they are working on to have as much exposure as possible. In companies however, the answer is often ‘err, do you have to?‘ – the fear of anything that might impinge patent rights etc makes companies generally rather loathe to spill secrets, even if there is nothing specific they want to keep quiet just the idea of accidentally releasing something they might later need is enough to make them demand silence.

What has ended up happening to me, is that I have managed to place myself on both sides of this argument. I want my work to be shared but at the same time have fears about loosing control of my work and possibly impacting its commercial prospects. Normally I sit firmly on the ‘everything open’ side of the table and it has been enlightening to see the other side of the problem first hand, and I was surprised at exactly what made me so reticent about sharing.

From a commercial perspective, there are many arguments over patents and accidentally releasing valuable IP – which have been explored elsewhere. For my work, that wasn’t too much of an issue. I have enough experience to know what to talk about and what to keep ‘hush hush’ without being totally mute. For me, the biggest commercial concern was quite unexpectedly the fear of being well… crap.

My software is cool, I love my software. But my software isn’t perfect and during its development there have been problems with some features, and there are things it can’t do, and even bugs that are mostly unsolvable. I worry that sharing this design process might expose these problems and customers will be reluctant to buy something that has quite well-documented flaws.

The open science part of me would argue that perhaps putting these flaws online would help the software, as I may get suggestions and help from the community. In academia, I was happy to share these flaws because failure is a big part of the process, and I’ve lost count of how many times people through this blog have helped me solve problems.

But from a commercial perspective, community solutions are a nightmare – if that solution is perceived as a key component in a piece of work I fear that the contributor will feel wronged that they are not being compensated for their work and demand a share of what I’ve made. Whether or not any claim to the IP in that project is legitimate, the very threat or perceived threat of arguments with my readers is deeply worrying.

These commercial fears were then compounded by the fact that I was working with a partner (who wasn’t crazy about the whole open science thing) and I was acutely aware that any damage I did to my work would directly affect them. My response was to clam up and to deal with it the same way a lot of scientist deal with similar problems – with silence.

Like I said, it’s been a bit of an open science fail on my part.

But, I’ve spent the last week thinking about this and decided that change is required, as well as some creative use of open science.

Firstly, I have decided to split my company off from my partner into a separate entity that is focused on developing new technology (and the odd bit of software). This allows me to make whatever decisions I feel like, as I’m the only one who has to deal with the consequences. This is sort of dodging the issue a bit, but it does leave me free to try and integrate open science with my commercial projects. In particular, I wanted to find a way to make community involvement in my project not something to fear but something to encorage.

I strongly believe that if people help me solve a problem that fixes something I’m making commercially, then I see no reason why they shouldn’t benefit from it. I have thought long and hard about how to do this but I’ve come up with a system I think is both workable and simple. 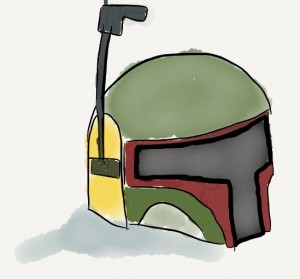 Every now and again, I will put up specific posts about problems that have thwarted me – along with a bounty. If you can solve that problem for me, then you get the bounty – which will vary depending on the severity of the problem I’m having.

For example, if I’m stuck trying to get a certain python function installed, then I might offer free stuff (t-shirt, laser pens etc); but if I need a whole PID controller developing, then I might make it cold hard cash. The only other criteria for solving the problem is that any solution will be shared publically for others to use.

It might take me a while to get a good idea of what kind of bounties are appropriate (feedback will be welcomed) but hopefully over time, my judgment will improve.

Obviously this bounty system doesn’t solve all of my worries about sharing things online but it does help the argument for sharing more of my commercial work. I have a few other ideas of ways to deal with some of the other issues which I’ll talk about next year when they are fleshed out a little more. But I feel that I’ve let myself hide for the last few months and I am determined to keep trying new ideas to open up my work.