Given that I’ve now been doing it a year, I thought it was time to share some statistics on how this site has been getting on. I have to confess – I was nervous about sharing my site statistics. It’s not something many other people do and I didn’t really want to be the first to bare all. Thankfully, I was saved from my internal conflict by the very nice people at the ICaMBlog who apparently didn’t share my reluctance and went ahead and published their stats. You should go read their post it was a really good insight into the thinking behind blogging.

So there are three main statistics systems logging data on my website. Jetpack (wordpress), Google analytics and TShost (my hosting company). Now you’d be forgiven for thinking that these might be in pretty close agreement as to my reader statistics – but you’d also be wrong.

To illustrate this point, below is a pretty graphic showing my unique visitor count as recorded by the three systems on a month by month basis. 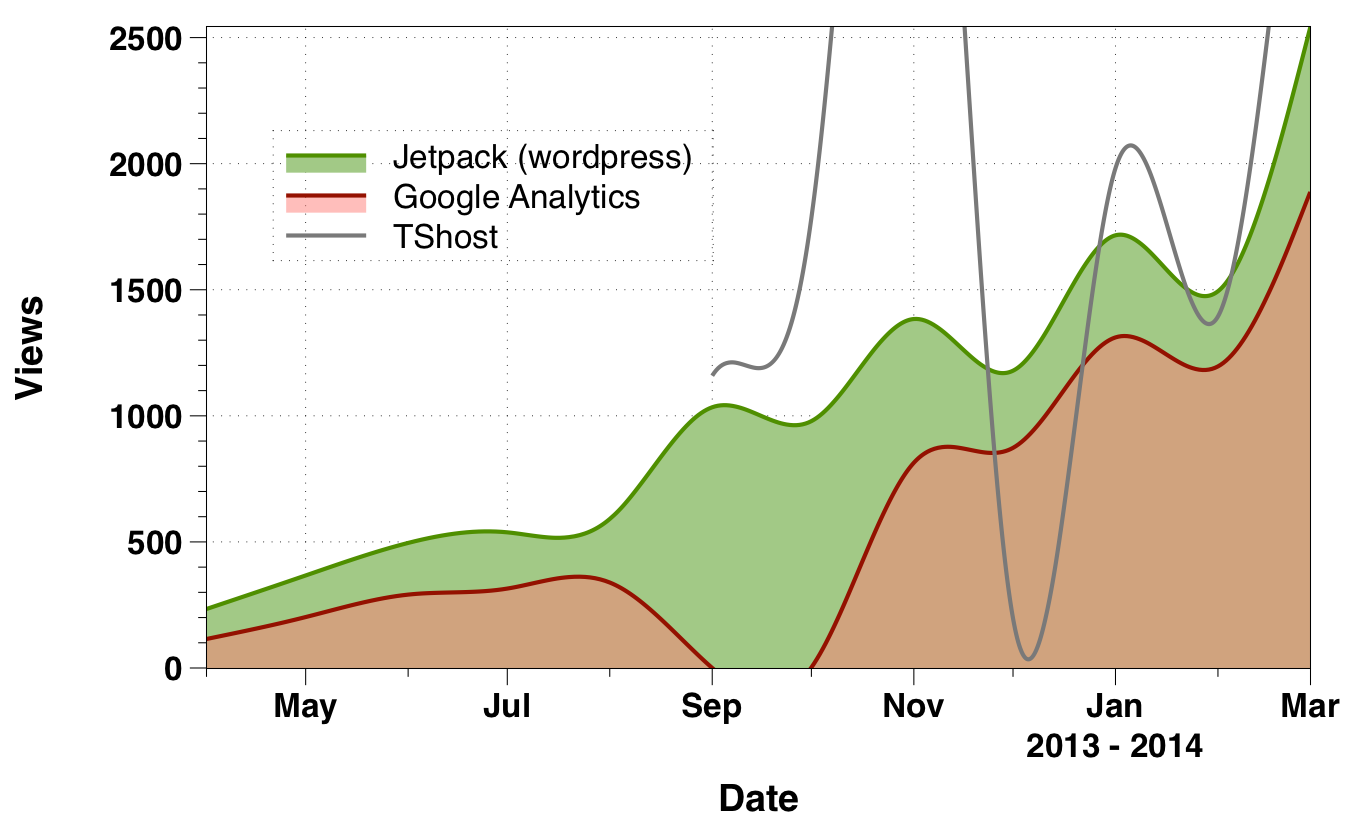 Now several things need explaining here. Firstly, the stats from TShost are bat-excrement insane, so we’re going to be ignoring those. Due to a very slight administrative cockerel-up, I may have turned off google analytics by mistake for 2 months, so there is a strange gap in the data. Sorry about that.

But those points aside, you can see that there is a clear gap between the jetpack and google anlytics. Other people have reported something similar and I’m not really clear on why, but google often lags behind wordpress by up to 40%!

So for the purposes of using a complete data set and a data set that was not drawn by a monkey dipped in ink, I’ll stick to talking about the jetpack statistics.

Before I get in to who read how much of what, I thought a quick summary of the content I produced to earn those numbers was in order. This year I produced;

To give a little perspective – Wind in the Willows is about 58,000 words long, which when researching for this blog made me sit back from the computer and go ‘woah’. But along side all those nice words has (with increasing frequency) been my variously made sketches which in total works out to be;

Also while it’s apparently one of the best kept secrets on the web (judging by my viewer numbers) I’ve also made a few live stream videos which all adds up to;

My advice; don’t watch any of them – wait until next week when I re-launch it, having learned much from my previous (and terrible) videos 😀

So given this vast array of content over the last 12 months, my site has attracted;

Which is nice…. and by nice I mean, amazing!. Seriously, to have started a blog from scratch and over it’s first 12 months to have 12,000 people read my inane ramblings is really an amazing feeling. Also, to be able to reach around the world to that many different counties is truly jaw dropping to a scientist who spends most of his days walking between a small lab and an even smaller office.

Although now I think about it, all I can do is wonder how I can get visitors from the 88 countries that haven’t visited my site yet!

Headline figures are nice but those are not the ones I habitually check and scrutinise every week. The ones I really care about most of the year is how I’m doing relative to previous weeks. The graph at the start of the post (repeated below) gives a pretty good idea of how I’ve managed to grow the readership over the last 12 months. 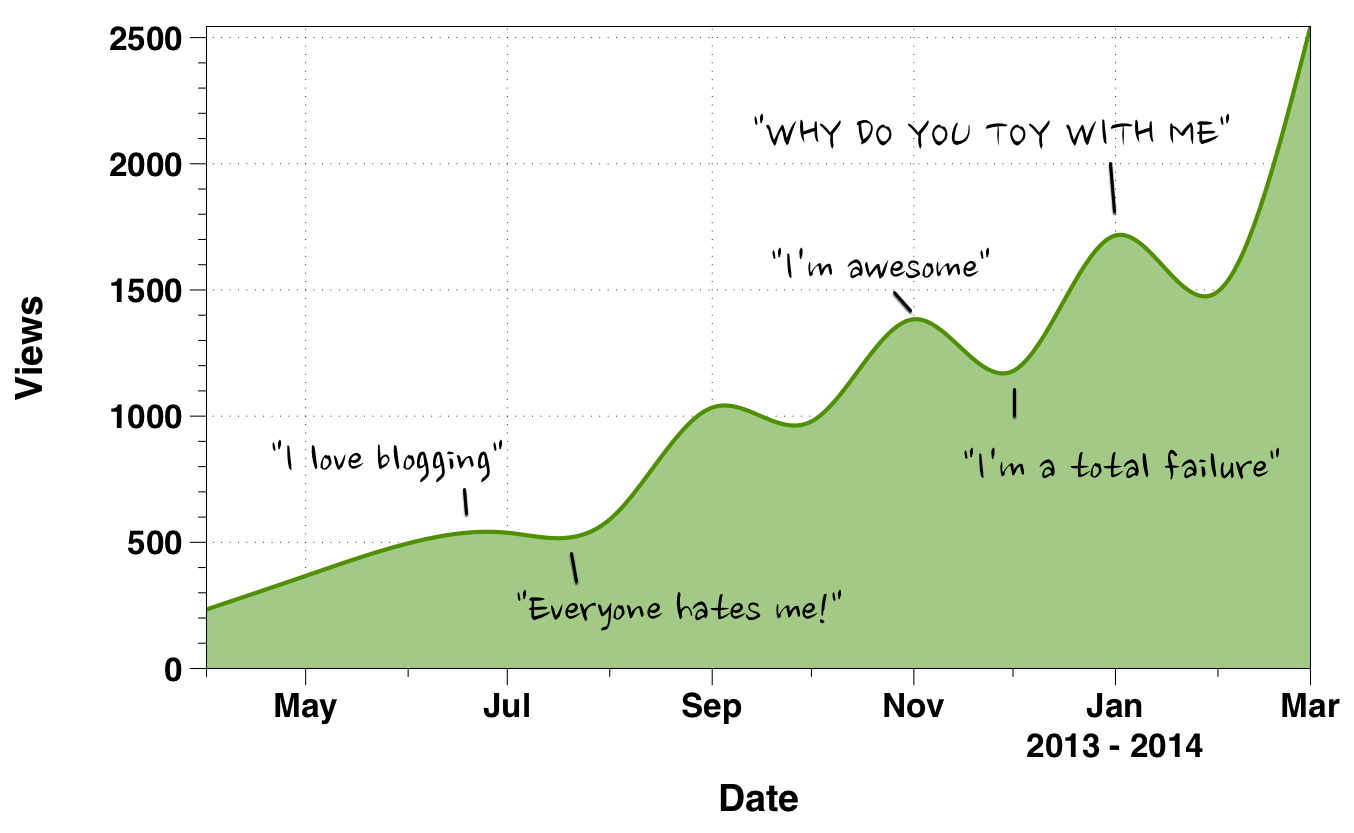 It’s been an emotional roller coaster

Obviously, viewership ebbs and flows, but the part that keeps me doing this is that overall, readership is growing. This blog is not reactionary – I don’t do opinion pieces on topical stories (actually self-imposed blog rule), I’m unlikely to get big traffic spikes for one-off stories.

So growth and repeat readers are very encouraging – it suggests that people are actually interested in the story of research rather than just one-shots. This is borne out a little by the other statistics.

17% of visitors read more than 1 page

Which is at least implying that what I’m writing/presenting is persuading people to dig a little deeper into other things I’ve written. Google analytics also allows me to track the amount of time people spent on pages but this is about 90% snake oil so I won’t bother repeating those statistics. 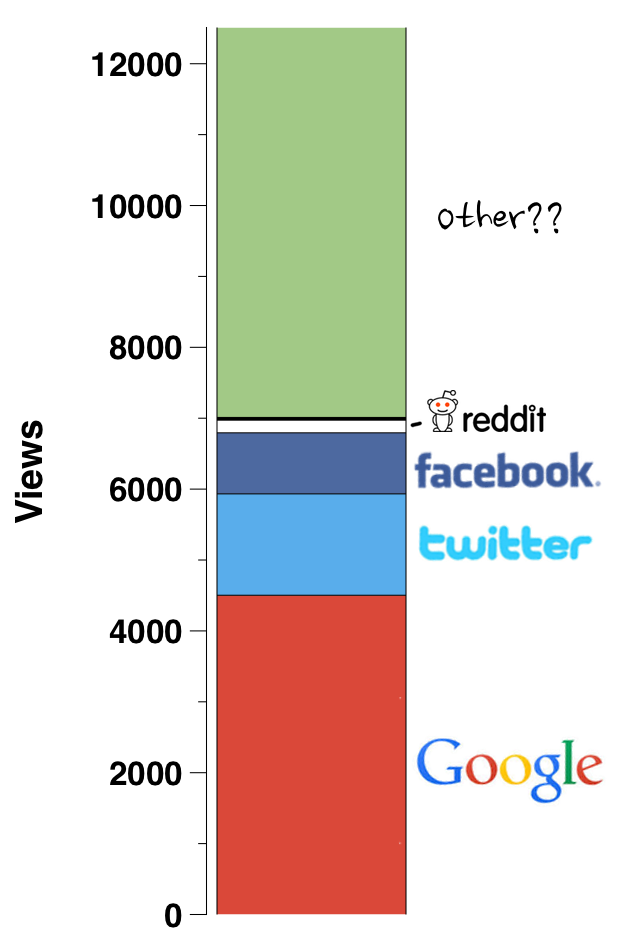 The google section is technically ‘Search Engines’ but who are we kidding, it’s basically all google traffic

Along with the actual numbers, one thing I quickly found myself obsessing over was where my traffic was being generated from.

In the bar chart on the right, the ‘Other’ segment represents a wide selection of referrers from various forums and other blog posts, as well as people getting to the site via either the RSS feed or a bookmark.

One thing that was surprising to me was how many of my visitors reach me via twitter. This might be a testament to my prolific twitter and shameless self-promotion :D. I did have a big review of my stats about 6 months ago and I was sure that back then twitter and Facebook’s positions were reversed. Sadly I can’t track how these figures changed over time but in the future I might try to tease that data out.

The biggest chunk of my views is from the all-powerful search engines who drive an astonishing 40% of my traffic (with google being responsible for about 98% of that). Below is a wordle (because I love those things) showing the most popular search terms that brought people to my site. 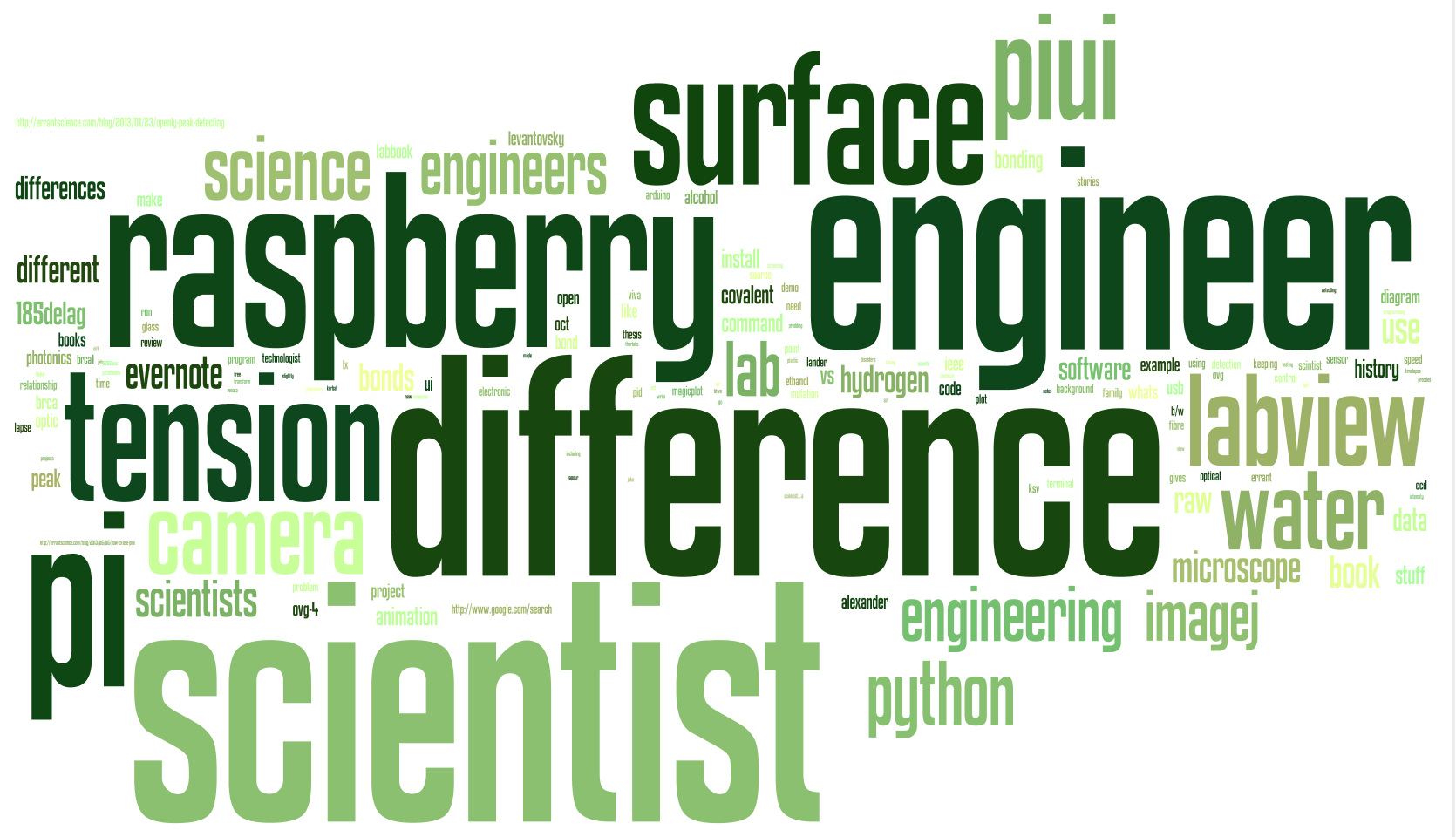 My personal favourite search was “I can’t get jeb kerman back” which is a problem I’ve often had in Kerbal Space Program – I feel their pain.

What gets views and what doesn’t is as far as I can tell, absolutely random. Despite 12 months of obsessively watching the view count on every post I write, I have not yet found a magic formula for writing a popular post. Below are the top 5 posts.

And just to add some balance my most un-popular post by far is my cool meeting infographic which was read by a SHOCKING 16 people. That day I learned that people are very discerning about what topics they want to see in an infographic – and meetings ain’t one of them.

Getting people to click a thing or interact is really, really hard. This year my blog has had just;

I had hoped (and have tried to encourage) a little more reader interaction but I’ve come to accept that the content I write just isn’t very comment-friendly. I’d always love to have more people discuss the topics I cover but, after 12 months, I understand that it’s not something I can really do much about.

Besides, in addition to the comments, I’ve also had a couple of e-mails about my blog and the one quoted below brought home to me that even a little blog like mine can have an impact.

Love your blog about 185delAG. I have it, too. I’ve been explaining to my sons that if they test positive, they don’t have to pass Fido on to kill their children. Thanks for sharing your story and insights

I think I’ve done okay. Single-handedly producing weekly content for a blog while also promoting it is no easy task and I think I can be proud of the reach it now has.

One final note that I wanted to add is that I may have produced all the content on this blog over the last 12 months but it would be terrible, poorly-spelt nonsense without the amazing work of my partner-in-crime @Giants_Orbit. She has proofread almost every article on this blog, often while feeding a baby. I owe her big!

This is an inspiration to me. I have s two month old blog with 30 uniques daily and I need motivation to continue.