Okay, I should be clear – I’m not actually giving anything away for like, keeps; but I do want to loan/lend someone one of my largest and most treasured pieces of equipment for a while (1yr+).

Last week I covered what a Langmuir Monolayer was and how we historically discovered their properties (TL;DR – they should be called Pockels Monolayers). Well, the equipment to do some of that kind of chemistry and single layer manipulation is called a Langmuir trough (pictures below, click to embiggen the photos) and that’s what I am hoping to lend out to another university. 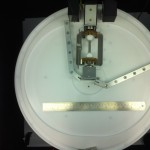 Circular trough overhead view, ruler for scale. I wasn’t allowed to take a banana into the lab 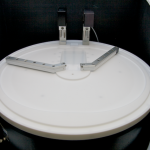 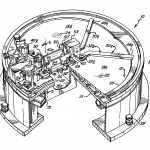 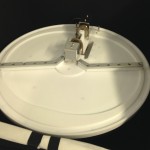 It’s a pretty standard Langmuir-Blodgett trough, which is used for manipulating monolayers and depositing those monolayers on various substrates. I’ve yet to cover the work of Katherine Blodgett but (with Langmuir) she discovered that by pulling a substrate though a monolayer you can deposit a single layer of material on a surface.

This kind of deposition of highly ordered monolayers of material has been pivotal in my work over the last 4 years. In my short time using this technique, I’ve used it for chemical sensor coating, bio-membrane characterisation, nano-material testing and even some fluidics research (I get around). I am slightly kicking myself that I didn’t learn this technique a little earlier in my career.

Now this trough is not one of the more recent models (it’s a Nima Alternate layer trough), in fact after a little chat with the original designer and manufacture (Frank Grunfeld) this may actually be one of the first of that brand ever built – and was apparently nicknamed ‘Cecelia’. This is from a magazine article by my lab predecessors written 10 years ago!

Now there are a few caveats to the loan of this piece of kit:

Firstly, I’m looking to loan this out for at least a year. I want to loan it out for two reasons. My lab is small and there isn’t room for it at the moment (also we have two) and it needs a nice warm home.  I figure that storing it in a cupboard is kind of a waste, there are always researchers in need of equipment and someone might be able to get a good year’s use out of this.

I want to loan it out for at least a year because anything else is just pointless. While we can probably make room for it sooner, I’d really like to give someone else the chance to have a go with the system and produce some interesting data of their own.

Secondly, I can only lend this out to another university, not to individuals or for-profit businesses. There may be some flexibility in this but essentially you’d have to make a really good case.

Thirdly, this is UK only. Sorry, I wish it wasn’t but it’s pretty dammed heavy and I plan on delivering it myself, as I’m pretty sure it would bankrupt me to try and ship it abroad.

I’m not looking for anything in return for this. Accepting the trough on loan from us is not a tacit agreement to put my name on any papers, nor is it secret code for ‘we must write a grant together’. The only request I have is that, as I plan on delivering it myself, I wouldn’t mind a tour of your labs and maybe a coffee – but I’d be happy to negotiate down to a look through a window and a drink I brought with me.

I really just want to make sure that my trough can have a good home while we don’t need it. The idea of leaving it in a cupboard unused while a researcher somewhere could be putting it to good use seems like madness to me. I guarantee that this probably won’t happen!

[…] had this problem with my 3D printer and resolved it by shipping some of my kit off to another lab for a while, which had the benefit of freeing up space and making sure none of my equipment was […]