You can haz PDF

Oh, how I wish life in science was simple… Actually, scratch that – I love complicated, messy and sometimes explode-y science.

Oh, how I wish publishing in science was simple!

Last week you may remember that I wrote about my horror at finding out that my paper had a 2 year embargo on it. I think the tone of the piece neatly conveys how I felt (mostly filled with rage)… But since then things have changed.

Shortly after posting my blog post – and of course, advertising it on twitter – one of my followers @David_S_Bristol (aka. Prof David Stephens from the University of Bristol) got in touch with what I took as a raised eyebrow of scepticism.

This raised eyebrow then raised even further and suggested yet more evidence that possibly what I had been told was not exactly right.

I had already checked the RoMEO entry for the journal and there was some mention of embargo periods but I am no expert at understanding all the small print, and in this case it seems I may have misread it. The Elsevier policy page cited in this tweet is pretty unambiguous – it has a nice little table that clearly seemed to say that I could release my paper as pre-print. 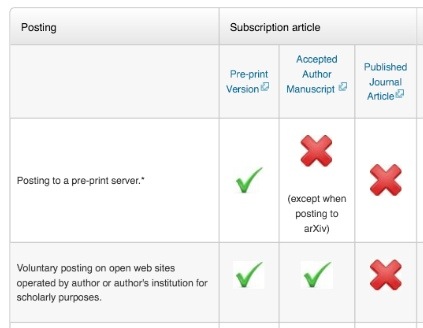 It appeared that something was not right. So armed with this extra information and a horrible sinking feeling that I’d just posted about 1000 words based on a mistake, I wrote to the library for clarification. However, before the e-mail was even out of the mail server, a person at the library e-mail me quite unexpectedly.

Just been reading your blog (and Tweets)…..

I double checked with the library head as he was passing, about the preprint question.

The policy for our database has always been to accept only post-refereed versions (i.e. accepted) rather than pre refereeing although of course you could make the preprint available on another repository.

Whole area is so complicated!!

TIL that the people who work at Cranfield University library are amazing and so good at customer service that they are apparently looking for things to help people with. It’s worth pointing out that Clare (@CranfieldClare) won Best Campus Support Staff last year – I think I can see why.

Apparently what had happened was a miscommunication over what I was originally asking to release. What this means is that, while I can’t post the post-review copy until after the embargo period, I can publish the pre-review version that I originally submitted. Which, while not being ideal, is a lot better than nothing!

So based on this new information, I’ll now prep my paper as a nice PDF and tidy up some of the formatting mess and post it next week with an explanation. It may have taken two blog posts to sort out but I will now get to promote my paper online, safe in the knowledge that everyone can read a version of my paper for free.

But just to emphasise, this was all uncovered thanks to blogging and twitter. If @David_S_Bristol hadn’t first questioned this problem and then helpfully provided information and evidence, then we might never have resolved it. If you ever need evidence that talking about issues and problems online can have positive outcomes then this is a good example to have.

This is all totally nuts.

“Whole area is so complicated!!” It currently is, thanks to misinformation from legacy publishers for $$$’s reasons.

We all can do without totally unnecessary “Copyright hoops” like this.

[…] will now make much more sense to anyone who might have an interest in this area. And thanks to some twitter awesomeness you can all download a version of this paper for free at the link […]