Playing Risk in the lab

Note: This article is re-blogged from my column in Laboratory News – go get your free subscription here

Growing up, I really hated playing Risk. As a game, it seems designed to please anyone with an inner Napoleon but punish those with the unreasonable desire to have fun. What I didn’t know when playing (and loosing at) this game growing up, was that my future success in the lab would be in part based on my skill at Risk.

Lab space is always at a premium. From the Large Hadron Collider to simply finding a bench to run a titration on, there is a constant need for clean(ish) workspace. This is made worse by a common trend in lab design and management to group several activities into large labs – kind of like open plan offices, only with slightly more threat of lethal gasses.

Many contesting people all vying for limited space is going to cause friction. The best you can do is draw up battle plans and be prepared. 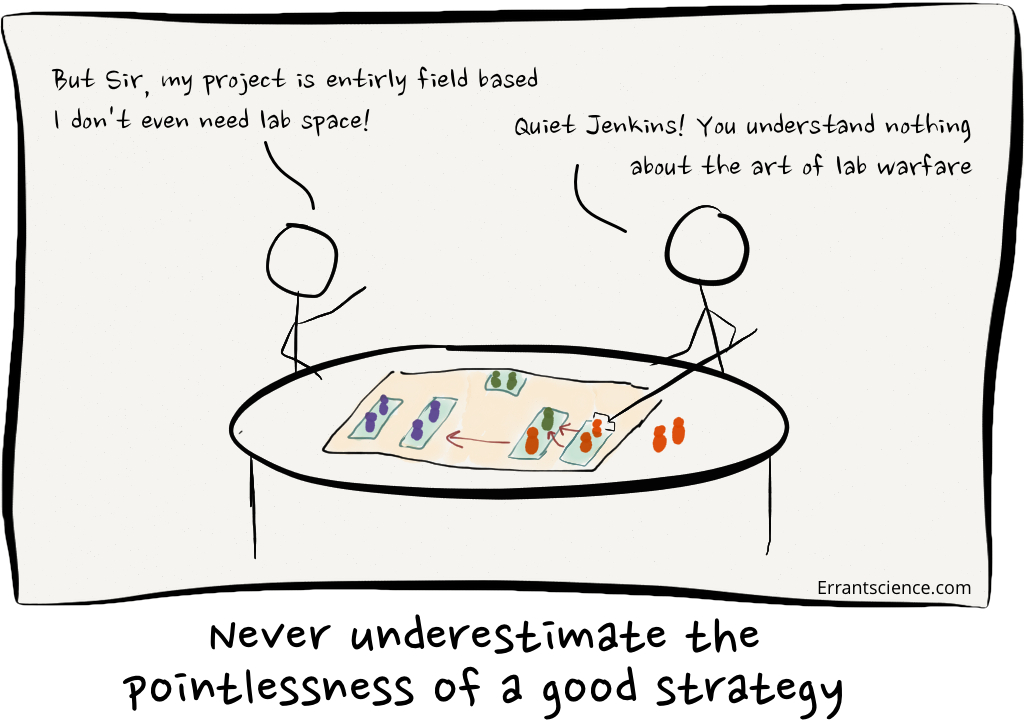 Firstly, maintain your space. No matter how much space your project needs, you need to give the appearance that it needs all the space you have. Get any seldom used kit out of the cupboards and spread it around – this will also help convinced any non-science visitors that whatever you do is probably brilliant. Everyone knowns more equipment = better science.

Next, prepare your borders. Border regions are the first line of defence and attack and need to be viewed as your battle lines. Making the borders clear can be helpful in defending your territory but it will also give your neighbours a clear sense of their border – which can be counter productive for future expansion plans. Having your most used equipment at your borders can provide a good physical barrier and also leads neatly into…

Invade! The best defence is a good offence. There are two key parts to this phase – sending a patsy and then attrition.

A student or new employee will do as the patsy – it’s normally best to not let them know your evil schemes as they are more believably innocent that way. Make sure that the patsy’s job involves a lot of use of whatever machine you have along the borders.

Next you wait and watch. If all goes to plan the patsy will spend a few weeks diligently doing their work (if they are a student there is about a 50% chance of any actually work being done) and in doing so, spreading out on both sides of the equipment. Soon the equipment will be surrounded by the build up of general lab detritus (eppendorf racks… or in a physics lab, errr… physics things).

If by some chance you have a student/new employee who is actually tidy and doesn’t cause this kind of buildup, then restart with a new student or employee – something is clearly wrong with the first one.

Now comes the deeply sinister ‘phase 3’ of the invasion – cleaning. Having seen this mess around your equipment, you should kindly offer to go clean it all up and in doing so be sure to accidentally move the equipment in to the newly cleaned space… your newly acquired bench space. 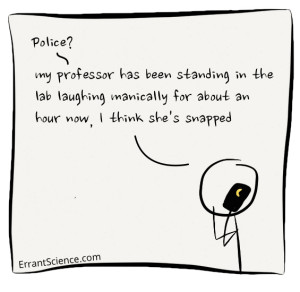 Cue evil laughter. Best to get the laughter in early before you realise you’ve just spent 2-3 weeks scheming to increase your lab space by about 30cm.

The most worrying thing about the steps above is that I didn’t make them up – they were genuinely told to me (in a little less detail) by someone who thought it was a good idea!