Taking a COSHH to the head

A few weeks ago I made a terrible mistake of taking the day off. Normally, a nice day off would be a good thing but sadly I managed to take a day off on the same day that my boss needed to nominate someone to handle our lab’s COSHH forms. Apparently everyone else he asked had a really good reason it couldn’t be them, so by default I was gifted the opportunity to help out.

For those fortunate enough not to know, COSHH is the punchy little acronym for ‘Control Of Substances Hazardous to Health’ regulation. Essentially, a set of regulations that cover all substances in the workplace that might either kill you or give you super-powers – depending on whether or not you live in a comic. 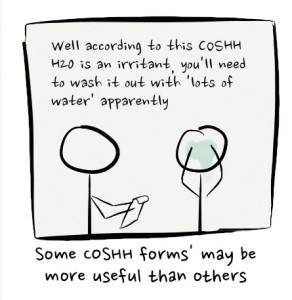 What is a substance that’s hazardous to health? I hear you ask -well basically, anything. The official COSHH website has a list of things that are covered by COSHH and the first two are ‘Chemicals’ and ‘Products made of chemicals’, which kind of makes the next 9 items on the list a bit redundant by being a perfect description of errr… basically, everything.

So with that highly specific guidance in mind this means that anything more dangerous than a foam rubber bowl of cold hypoallergenic porridge needs a COSHH form.

It can vary but a COSHH form is essentially a long (8 pages in our case) document which shows that you have considered all the hazards of the process you are about to use. It acts as a nifty way of proving that at some point you’ve considered that just maybe testing your hydrogen sensor next to your 3 bar heater isn’t a good idea. The basic principle being that if you make someone write down the crazy thing they’re going to do, maybe they’ll reconsider it.

A key feature of our COSHH forms is that they have a scoring system for all the dangerous stuff we are about to do. Each thing gets a rating (1-3) for both the hazard (how big an explosion it will make) and the risk of it happening (do you like to smoke while working..?). These two numbers are then multiplied and if you score more than 4 then your process is deemed high risk and further review is required, causing massive delays and bureaucracy. Oddly enough, most COSHH forms come in at exactly 4…. can’t think why. 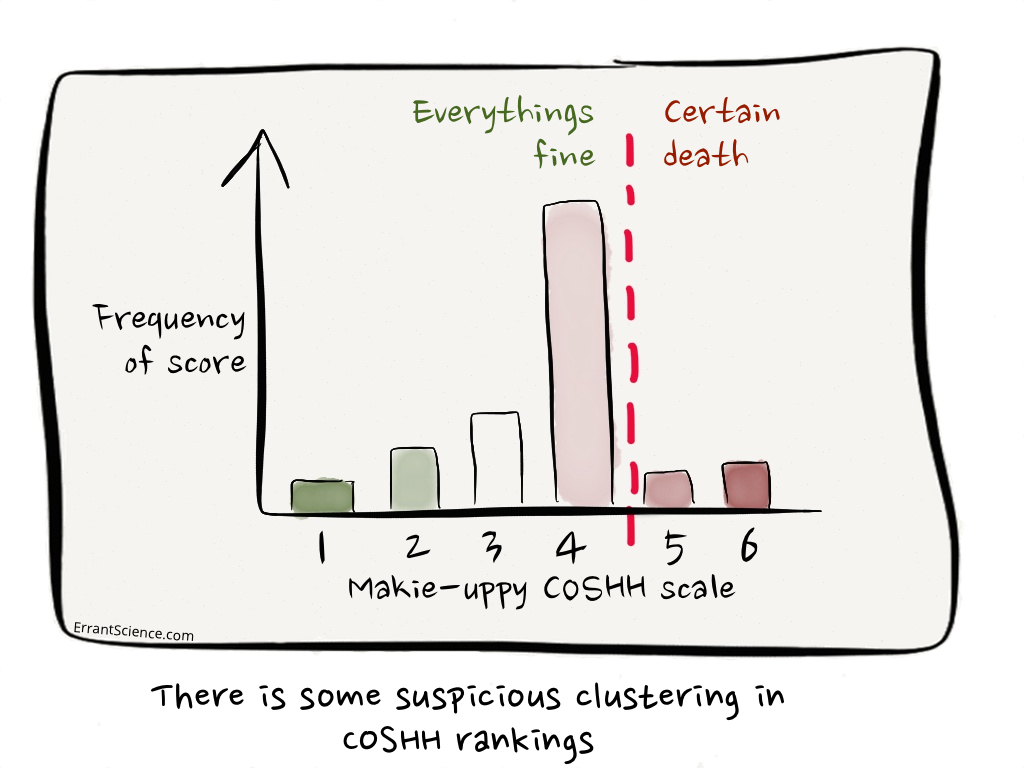 Common practice when filling in a COSHH form is to complain about it bitterly, download the Material Safety Data sheet from the sigma website, and then make random guesses about what it means by ‘irritant’ (literally everything is classed as an ‘irritant’).

My role in all this is that I am asked to give judgment on these much despised forms and say whether or not they have been appropriately assessed. Should I find that just maybe the researcher in question has been a little light on the possible downsides of using 5 gallons of nitro-glycerine I then get a fun choice. Either I tell my colleague that perhaps they need to review the safety procedure – thus causing them delays, admin, suffering and most certainly a deep lasting hatred for me; or I ignore it and then try not to worry when my lab suddenly gets a nice airy view over a new crater.

Remind me to buy my boss something extra nice for Christmas this year, possibly something with a COSHH rating in the double figures…