My name is Amanda Glaze (@EvoPhD), and I study the intersections of science and society, specifically evolution, in the Southeastern United States. I am honoured and humbled to join you as a guest blogger here on Errant Science and RealScientists.org in honor of Ada Lovelace Day. It is because of the courage and contribution of amazing women like her that women like me are able to study in the fields that we love.  It is in honour of those, like Ada, who made a powerful statement for the contributions of women in intellectual fields that we continue to fight for equal treatment, respect, and support for future generations of women in STEM fields.

Picture this – Sicily, 1975… Okay, not really, but follow along with me for a moment…

It’s that one question or comment in your field (you know the one) you can see it coming from a mile away, like a slow-moving freight train. You begin to cringe inwardly when you see it forming in the mouth of the person to whom you are speaking, and *BOOM* there it is…..

“If we evolved, why are there still monkeys?”

Or my personanal favorite “Scientists don’t even believe in evolution, and I don’t either…” 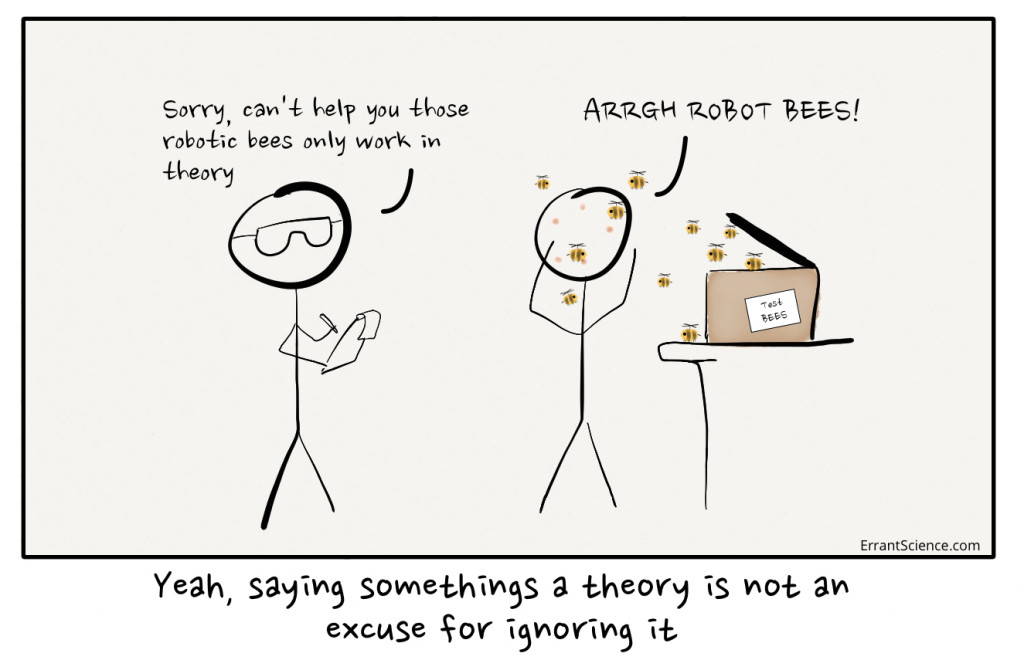 So take a moment to think about it, because we all have that one phrase we dread to hear. Let that sink in, let that mixture of emotion that it brings settle over you for just a bit. Now, imagine going out every day with the intention of addressing that in every person you come across, in every nation where someone will listen. Imagine trying to understand why, beyond the superficial assumptions, people ask those questions and what could be done in the long-term to make fewer people ask them.

That is me, at least, that is what I do… because for me it is worth the trouble of understanding the problem and finding ways of correcting the misconceptions and misinformation that is out there. Now, don’t fool yourself into believing it is just about evolution, because it is much bigger than just evolution, it’s a MASSIVE problem, one big enough to throw off the intellectual balance of a country once widely viewed as one of the world’s leading super-powers. And it is growing by the day and spreading all over the world.

My focus of study over the years has “evolved” (pardon the pun!) from scientific processes and change, to the realm between science and society – specifically, the processes of acceptance and rejection of evolution and how we might bridge the growing gaps between the scientific community and the general public in this, and other realms of scientific study. I have spent the past four years embedded in various communities in the Southeastern United States, studying the process of acceptance and rejection, the worldviews that connect with and diverge from evolutionary understandings, and cataloging the lived experiences surrounding the teaching and learning of evolution in a region where the science/religion conflict is quite volatile.

So, I do this for science, but not just for the concept of science, but because of the need for a truly scientifically literate and logical society, for the education of my own children and yours, for the hope of having leaders one day who follow the path of evidence and logic instead of mongering fear and ignoring what the data is telling them. Our society relies more and more each decade upon science for technology and solutions to problems, and yet it seems that each decade, more and more people grow suspicious of science or get lost in the jargon and lectures of science class, failing to see the big picture of what science is and how it relates to each of us.

If what I do sounds interesting, great! But getting here has been quite the journey.

I spent most of my life living in the rural Southeastern United States, reared in the Southern Baptist Church, in a devout Southern Baptist family. I had a very normal Southern childhood, complete with neighborhood fish fries, dance lessons, Alabama football (Roll tide!), summers at the river, and learning to enjoy the great outdoors. I had the benefit of being adopted into an amazing family, in which I was the only girl of four grandchildren. From the youngest age I was “one of the boys”, every bit as much an outdoorswoman as the proverbial Southern girl, in frilly dresses and cotillion training (yes, that is real, even now). I had the luck of being brought up in a family that viewed education in much the same way –as Ada Lovelace’s mother– that you could educate someone in such a way as to give them a foundation that could never be taken away. This was especially important to my grandmother, herself educated with a Master’s Degree, even recruited for special services to work with the government during WWII on a then-new technology called “radar”, and my mother, a Master’s educated counselor and teacher, herself divorced and a single mom for a portion of my youth, although I had many others in my family encouraging me from a young age.

Although I was reared to be a proper Southern lady, they maintained my love of the outdoors on our family farm, nurturing my strong curiosity and personality. I alternated my time between spending time with the animals on my grandparent’s farms (one set had cattle, the other agriculture) and being a cheerleader, split my interests between dance classes and science experiments. In a lot of ways I relate to Ada Lovelace in that I had a life where I was never told growing up that I could not do something because I was a woman, but rather the opposite, I was pushed and continually encouraged to go above and beyond expectations in all realms. I truly cannot tell you the impact my Grandmother and Mother (both strong Southern women) had on my life, making it where I never thought twice about not being able to do something. In fact, I have many memories of being told throughout my life that I could do anything, all I had to do was set my goals and make them happen.

Along the way I had some bumps that changed my trajectory and path greatly. Among other things, at fourteen I was involved in a physically violent and emotionally abusive relationship that forever damaged my trust and faith in people. At nineteen I gave birth to my first child, out-of-wedlock, in the Heart of Dixie (no stigma on that). Through all of this, I never lost sight of my love for science or my desire to go as far as my studies could take me. As a single mom, I went back to school, going from a full ride leadership scholarship with honors at a liberal arts university to taking one class at a time from my hometown junior college. While I built a life for my son and myself, I pushed through my education, earning my bachelor’s degree and acceptance to a master’s program for study in science and education while also being a full-time mom 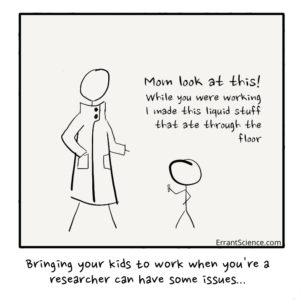 (my 13-year-old has enough lab time to be a post-doc). I also met my husband as a grad student and we married the spring before I began my doctoral studies.

Whereas most science majors slip seamlessly from program to program, I had to fight at every turn to justify to department heads and lab directors that I was worth the time and space to complete research. My background coming from a less lauded program, with constraints of being a single mom, majors in both education and the sciences, and being a newlywed with children was something that many held as negatives over me, rather than seeing it as proof of my ability to persevere and thrive when challenged.

For the record, I would conduct my dissertation research and proposal while pregnant and finish my dissertation writing at home with three children while my husband finished a four-month stint in Washington D.C.

Let me just say, sometimes you do things simple because you are capable of doing great things, sometimes you accomplish things in sheer spite of all the people who have told you that you can’t do it. I was extremely lucky that a handful of amazing scientists and one incredible and revolutionary science educator were willing to listen and take a chance on me (shout out to the unflappable and quite incredible M.J. “Dee” Goldston) and that there were many teachers, professors, and friends along the way who continued to tell me that I should pursue the highest level of study and do something amazing. Without their time, mentoring, and support, I would not have had the opportunities to go from junior college to a research institution or study such a wide range of concepts – from transgenic mutations in plants as vaccines for infectious disease, to population genetics in local isolated populations, and finally to the intersections of public opinion and science that so frequently came up during our midnight lab sessions and conversations in the field.

I can truly say that my plans have changed dramatically over my short lifetime… from curious daughter, to single mom, to scientist, to wife and mother again. I have worn all of these hats on my journey, and each has played a special role to get me to a point in my life where I am comfortable saying that I am both academic and domestic, conventional and revolutionary, all on my own terms.

Ada Lovelace was an amazing woman before her time. Many in science know her as the mother of scientific computing, having built the algorithm that “programmed” Babbage’s Analytical Engine, but, sadly, many outside the sciences have never heard her incredible story. The daughter of infamous writer Lord Byron, Ada was classically trained in mathematics and other subjects in an effort to kill the “fancy” her mother attributed to her father. She was provided the best of everything and was never held back because she was a woman. If there is anything we can learn from her story, it is that the limits we perceive to exist around and between us are not set in stone, and anything is possible with the right opportunity and support.

Many thanks to Ada Lovelace and so many others who have, and continue to, pave the way for women of science everywhere!

[…] That last one stuck to me for the entire day and while the others were equally frustrating, the idea that I was walking in to a situation where the divorce rate was exponential (as in all doctoral programs) I was overwhelmed, terrified, and determined all at once. I set my resolve in those first days and I was determined, as always, that I would not let the statistics, or other people, define me (back story link here). […]