Prototypes are things of beauty. I’ve made a few over the years and each one is a fantastic bodge of barely hanging together cardboard, gaffer tape, blue tac and sheer will-power.

Prototypes exist as the bridge between a possibly good idea, and funding. They are there to prove the basics of the thing that you thought was brilliant when you wrote it on a beer mat, enough to persuade some nice people to give you proper money to go make it. Its sole purpose is to be ‘good enough’ and be built with less money than a poorly funded local church raffle. So when building a prototype, future proofing and ‘upgradability’ get thrown out of the window for patches and quick fixes to hold the system together long enough to impress some people in suits.

This is why my very first prototype instrument (a microarray reader) was built out of a cardboard box, my own digital camera, gaffer tape and a UV torch I got as a freebie at a conference. My current instrument (laser fabrication system) is a little better but even that has a huge range of design decisions that are definitely categorised as “we’ll fix it later”. 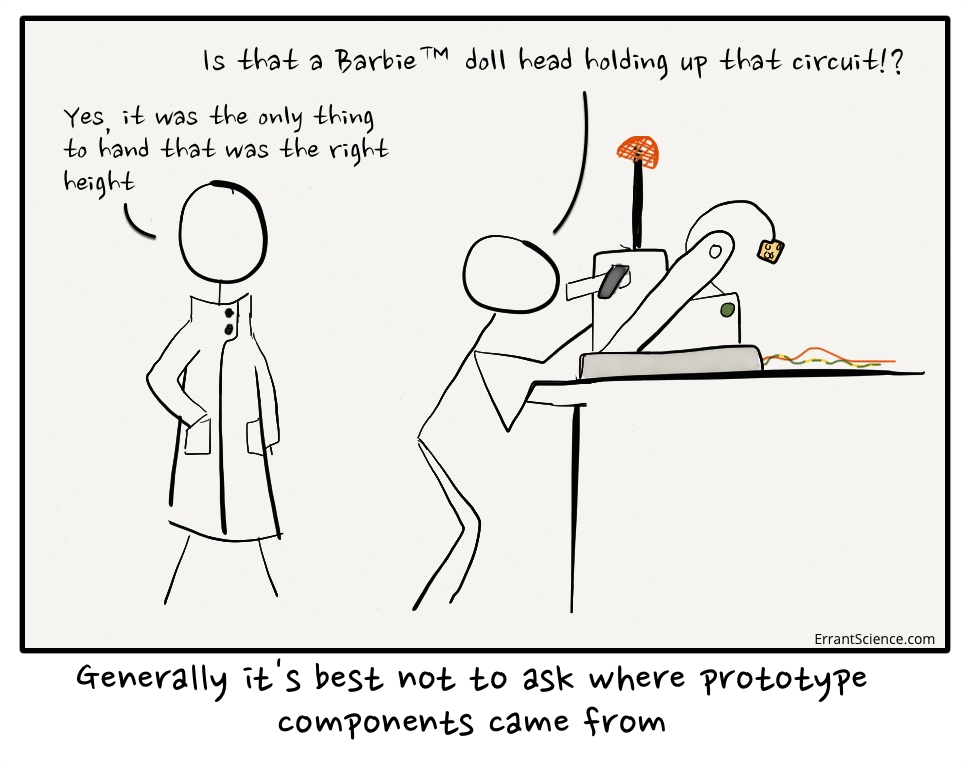 But unfortunately for me, later is now and I’ve reach that dreaded moment where I need to take the much loved prototype and turn it into a reliable, reproducible, optimised system. Faced with this monstrous optimisation task, I slowly have to go through the system and find ways to reduce the error, and hopefully make it look less like a school science project and more like a sellable instrument. The theory being that by swapping out all those patches and fixes I can reduce the error down to a reasonable level to pass testing.

Unfortunately, prototypes don’t work like that. You can’t just reach in and swap out the components for higher quality alternatives. Prototypes are about as close to feng shui as I’ll ever believe is possible. Each component is perfectly placed to achieve some form of fragile balance teetering on the edge of barely working. 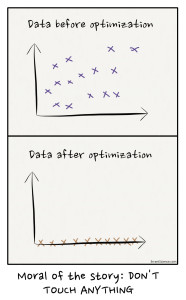 A few months back when I was optimising my laser fabrication system, I realised that my data and reproducibility got a LOT better if I doubled the power. We couldn’t run at higher-power when building the prototype so it was pleasing to find such a simple fix. Three weeks later, my data was now terrible, with very weak signals (although annoyingly very reproducible ones) and no apparent cause.

Turned out that one of the components in the system was ‘borrowed’ from some equipment not rated for laser use. At low power it had never been a problem but my new ‘fixed’ prototype was merrily burning a giant hole straight through the middle of it.

So obviously the answer was to replace that component with a properly rated one that could stand up to the power. A simple enough fix, and somewhat predictably, 2 days later my once repeatable signals were now all over the place because that fix had messed up several other as-of-yet unidentified critical components.

I have a deep suspicion that like most re-designs of prototypes, this domino effect will continue and I’ll be left rebuilding the whole thing again from scratch. I have a vague memory of that happening before with previous prototypes but every time I try to remember what happened back then, my brain will only show me images of bunnies and kittens in what I suspect might be some form of mental self defence.

[…] just a fancy word for taping bits of cardboard together until they look like a prototype, and then slowly swapping out or painting the cardboard until it looks less ridiculous. The tricky bit is the […]