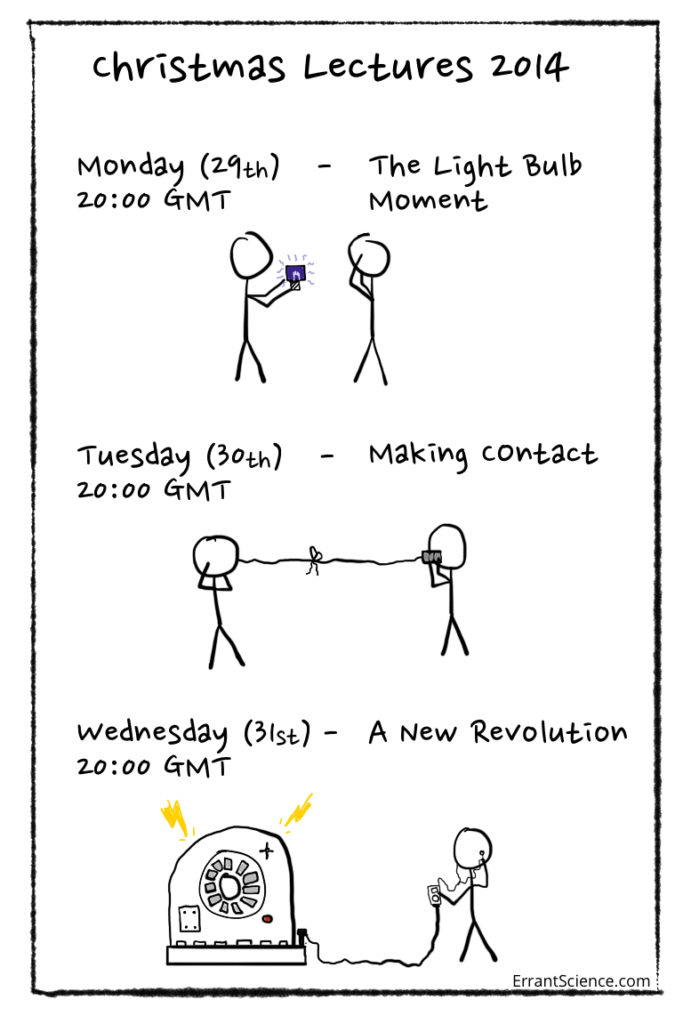 [UPDATE: Lectures are over but you can go watch them here!]

This week is the first of the Royal Institute’s Christmas lectures. They are an amazing series of talks and well worth watching – for all ages. This year you can watch them online on the via the BBC iPlayer. If you don’t live in the UK and can’t access iPlayer then you’ll have to wait for them to be made available on the Ri’s own Ri channel.

So to celebrate the start of the lectures, I wanted to share a little about the history of the lectures beyond what is on the Ri site and Wikipedia. Basically, I love science from the 1800s and this was an excuse to nerd out and spend my day reading very old documents – thanks Google!

Michael Faraday is a household name in science. His contributions to our understanding of electricity, magnetism and chemistry were ground breaking. However, in addition to his litany of scientific achievements – he also loved to teach science.

Faraday started his professional life working at a book shop. It is said that while working here it was a chance reading of an article in the Encyclopaedia Britannica that inspired him to seek out a life in science. I use the phrase “it is said” because while researching this post I couldn’t actually find any documentary evidence of this, but it’s a nice story so let’s just go with it.

Faraday began to attend lectures at the City Philosophical Society in around 1810. The lectures were given by John Tatum who always included a demonstration with his work – which was not common at the time. In around 1812, Faraday then attended a lecture by Humphry Davy who was well know for having a dramatic and entertaining lecture style. 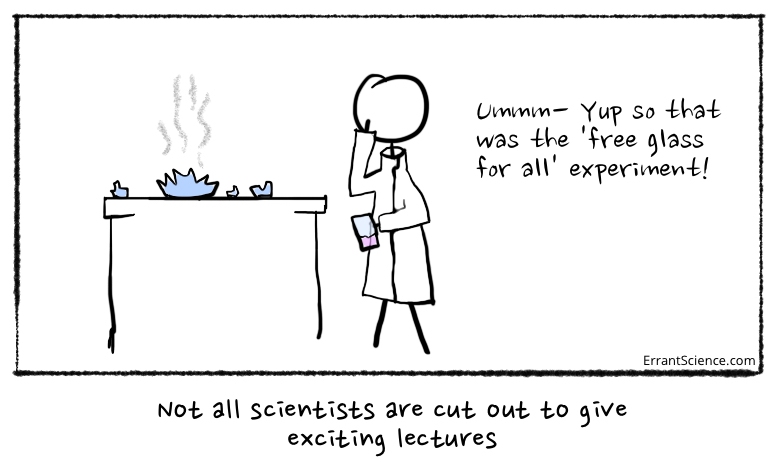 This showmanship style of lecturing had a big impact on Faraday. In 1813 he drew on this experience to write letters outlining his guide to lecturing – which included don’t be “screwed to the floor”, and that using illustrations was even more important, as sight was the best way of conveying information. He even noted that seeing an experiment is sometimes the best way of convincing someone that it works.

So it was with this background that, when Faraday become Director of the Royal Institute (Ri) laboratories in 1825, he started the Christmas Lectures. It’s not clear from my research that it was Faraday’s idea but given his history and drive to be a better lecturer, he was certainly the right boss at the right time to approve it.

The Ri Christmas lectures were founded in order to teach science not to adults but to a “juvenile auditory” via a holiday lecture series over the holiday breaks.

In 1825 this lecture series was 22 lectures long and split between the Christmas period and the Easter holiday. Attendance to all 22 lectures cost 2 guineas which when converted to today’s money and accounting for inflation, works out at £200.00. When compared to the cost of attending a 2 day academic conference, this sounds like a great deal!

Since 1825 past Christmas lectures have included such notable names as John Tyndall, Charles Vernon Boys, David Attenborough & Carl Sagan. Lectures have covered topics as diverse as “Light and the Eye” to “Sound: Musical and Non-Musical”.

As a child growing up in the 90s (pre-useable internet) my exposure to science was pretty limited. Beyond the news and school all I had was Tomorrow’s World and the Ri Christmas Lectures.

For me watching those lectures was the first time I was exposed to what you could actually do as a scientists. I wasn’t learning dull organic reactions or watching a show about impossible devices, I was watching a scientist show off what they got to do all day. Mostly my thoughts were “yup, that, i want to do THAT”.

This year the Christmas lectures are being given by Danielle George. Danielle is Professor of Microwave and Communications Systems and Associate Dean for Teaching and Learning at Manchester University. She is also not actually a scientist and is from the dark side (engineering). Although as many of you may have read in a previous post, I don’t really think there’s any difference.

Danielle is giving a series of 3 talks titled “Sparks will fly” which has the very timely focus of hacking your home and devices which, has nice symmetry with the Christmas lectures exactly 100 years ago in 1914 by Charles Vernon Boys entitled “Science in the home”.

The first lecture “The light bulb moment” is on the 29th of December (20:00 GMT) and looks back the invention of the light bulb and it’s development to modern LEDs.

The second “Making Contact”  (30th of December 20:00 GMT) is on the humble telephone and how it has led to an amazing explosion in communication around the globe.

And finally the third talk is “A New Revolution” (31st December 20:00 GMT) which focuses on the motor and what it has achieved and what we can do in the future.

In all her talks there is promise of many things we can do at home with a big focus on trying things and seeing the results for yourself. I think that is something Faraday would have been very proud to see continue 139 years on.