So just imagine you have a cool blog filled with amazing content and cartoons. Now you’ve worked hard on that content and you’re pretty sure it’s basically the best stuff on the internet. And slightly more amazingly, other people seem to like the content and ask you if they can use your stuff! Others however, don’t ask and just take your content and post bits on their own sites.

To start with it’s easy. Some people use your stuff, and your content is pretty popular and easy to manage with the 2-3 people that want it. However, eventually it gets more popular and people start sharing your content even further and you lose track of where it has gone. One day you even find it on a for-profit advert-driven website, touted as their own content.

That is the position many people running blogs or content producing sites eventually tend to find themselves in.

Stolen with a strong sense of irony from Nedroid fun times who you should all go read!!

Well as you may or may not know, any content you produce online you automatically own the copyright to. This means that if someone else wants to use a picture or section of text, they can’t without your express written permission.

However, there is a bit of an assumption online that once an image has been released to one person it becomes fair game. It’s a combination of no-one wanting to take the time to write to you and ask permission, and a feeling that you shared it once so you might not mind again.

So the answer is to do what various companies do and write some terms and conditions about use of your content and post them on your site so that people can easily see what to do. But if like me, you’re just a random blogger, you probably don’t have anything like the legal skills to write that kind of stuff – and even if you did it would probably be incomprehensible legalese that no-one wold ever bother reading.

Well, this is where a very nice group called Creative Commons comes in. Creative Commons are a non-profit organisation that freely provide legalease to allow you to share and protect your stuff online.

They have developed this clever, modular legal framework where you can just select the kind of sharing you want to allow on your site and then slap that tag on it.

In the case of ErrantScience.com I used to have a little © tag at the bottom but that has now been replaced in the side bar with a creative commons licence: CC-BY-NC. This trio of acronym is how creative commons presents is licences – each pair of letters signifies a restriction to the licence.

BY stands for by attribution. This changes the basic licence to ‘anyone can use it but you have to say where you got it from’ – either as a link or a note explaining the source.

NC stands for Non-Commercial. This adds a clause that while anyone can use your content, they can’t use it for commercial purposes. This is by far the trickiest part of the licence to manage as it is really up the copyright holder what this precisely means and what they take issue with. 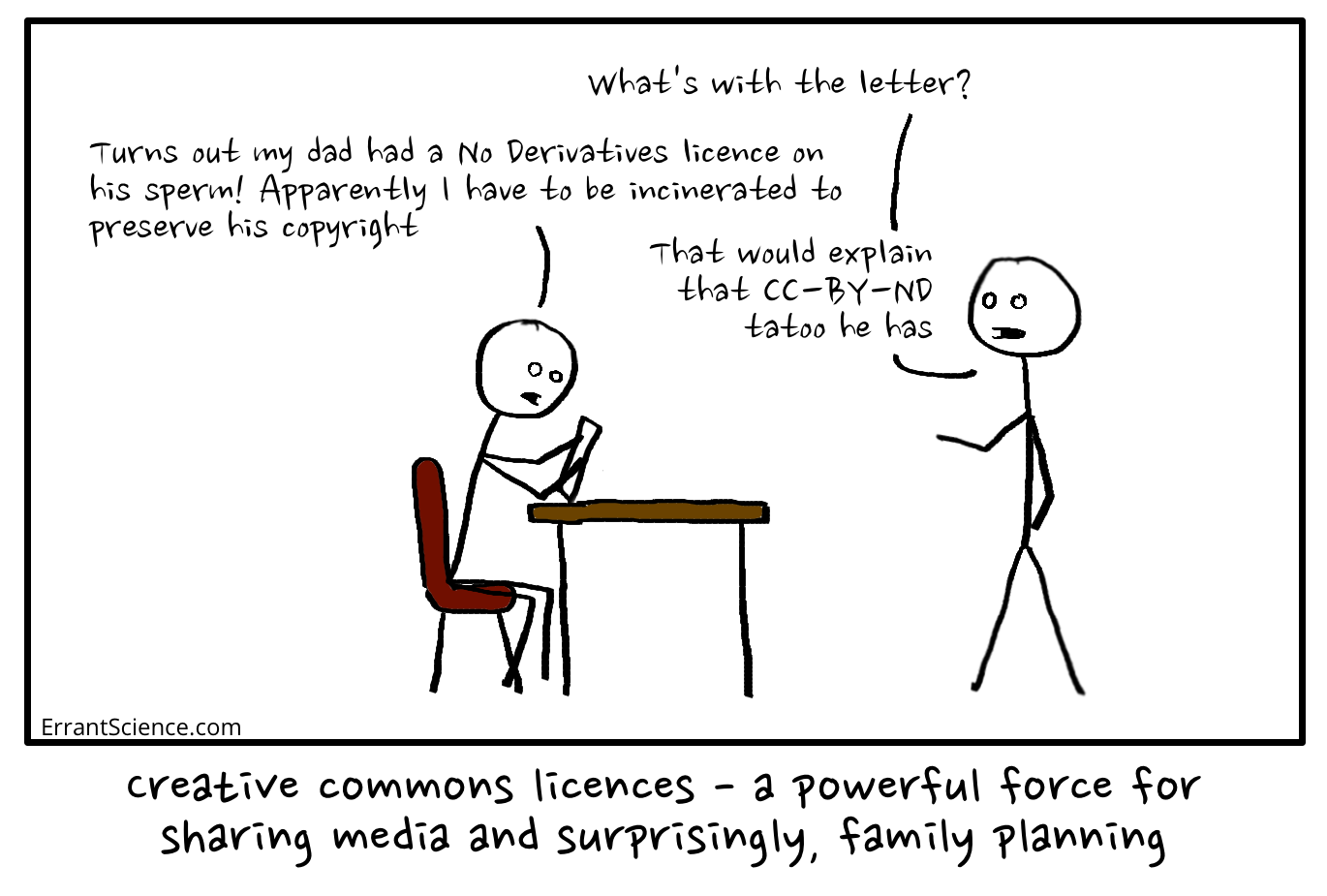 For me this CC-BY-NC licence is my way of saying to everyone that I am more than happy for them to share my content, be it text or cartoons without asking permission – provided it’s a non-commercial case. As I’ve explained in my little ‘extra info’ available here, Non-Commercial is different and really I will have to look at it on a case by case basis. And I’m not even sure that I understand what I’m okay with yet.

For example, I’ve had two cases of commercial use that I’ve had to deal with recently. The first was a site with advertising, using my cartoons with my website link cropped out. They were making money via clicks off my content, with no attribution. So that I got taken down, as frankly it’s just rude!

The second was much more difficult to decide on. I discovered that my blog was recently indexed by ACI – a scholarly academic blog index. Now obviously they are well within their rights to index and profile my blog but they had also taken the first 100-200 words from each article and posted them for people to read or download. Now technically this is a violation of my copyright as they are reproducing my content for their own commercial gain (people pay them to have access to their curated index).

In theory I could have a tantrum and demand they take down those short excerpts. But I don’t think this case really warrants that. While they are clearly using my content I don’t think it’s taking anything away from me (they are only excerpts, no images) and the content isn’t really the main focus of their income (that’s the indexing). It’s at most, a courtesy to their subscribers to give the titles more context. So for now I’ll let ACI keep it.

But with the CC-BY-NC licence I only ever have to deal with these occasional commercial cases, everyone else can now use my content freely and share my work and maybe even bring me more readers. And that seems like the right way to be sharing things. Share by default with a few conditions rather than never share anything without express written permission. Sharing is good, something that anyone that watched TV in the 80s should already know!

[Update: This post was edited to to remove previous care bear video which was ironically not properly accredited 😉]