I live in the UK and right now, we are in the midst of a mini heatwave. We only ever have ‘mini’ heatwaves as not even the blazing hot summer sun can hold back the grey clouds for long. But my brain has a very clear threshold for work – any hotter than about 26 degrees and it just shuts down and insists that I go find some shade and a cool beer. 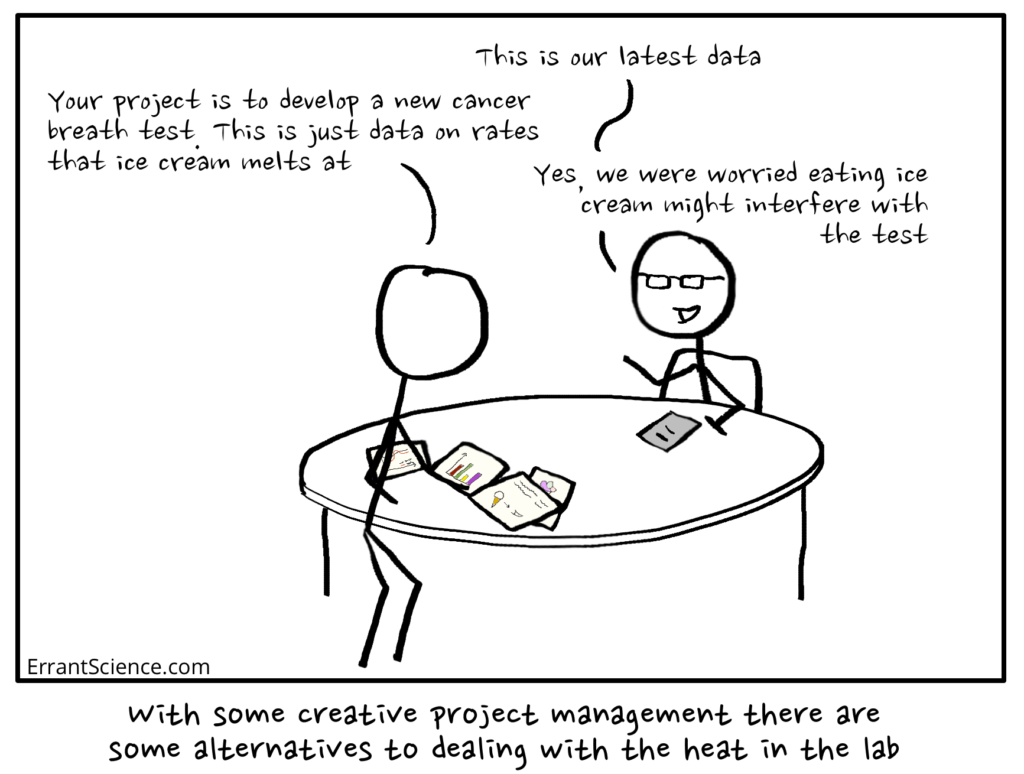 So today I am about as much use a stove top chocolate tea pot – and also, almost as melted. However, as bad as things are for my brain it’s so much worse in my lab. I work in 3 different labs at the moment. One laser lab and two chemical clean rooms.

Now the chemical labs are great as they have their own dedicated air-conditioning system and my predecessor massively over-spec’ed them. Both labs actually run off one A/C unit but there are two installed, so if one fails they just boot up the other one while they make repairs.

Although to be fair when it does fail, it tends to fail fairly spectacularly. Last time it went off-line during the summer, both units failed and caused a mini flood. This meant both sealed rooms had no air flow and lots of heat generating equipment. Within an hour it went from 22.5 (the value I call room temperature) to 30 degrees C. By lunch time it had topped off at about 38. All my chemistry experiments had to be abandon as being totally incomparable to anything done before. I had to check the weather forecast in the morning to plan my lab schedule.

[Update: So I wrote this yesterday lunch time. At about 16:00 my student  informed me that the AC in the clean room has failed, it was already slightly above 30 when I left… bugger]

My laser lab on the other hand is a complex and frustrating beast. It’s quite a large lab and so we have a number of laser systems in there.

My UV laser runs most days making sensors (we make a lot for other universities, if you want some please feel free to ask 🙂 ). It’s quite a beast (as I’ve shown off before) and has a dedicated water cooling system (plumbed in with the actual heat exchanger on the roof). However, the water cooling system is only designed to keep the laser in a certain range and isn’t there to keep the laser running cold, merely not hot enough to fry an egg on. So when it’s running it is acting like a very inefficient and expensive 2 bar heater.

The other laser (currently in operation) is a much smaller CO2 that we use for melting fibers or burning holes in things we think might be funny… umm I mean, we totally don’t do that. Mostly the laser is only fired in short bursts, so it doesn’t really generate much heat. But it is super critical that its temperate is kept very stable. So that laser has its own little water cooling system that circulates the water though the laser, then into a snappy little blue box which helpfully dumps the heat out into the lab.  So when this one is running it’s more like having a hair dryer constantly running on ‘hot’ blowing into the lab.

Now ordinarily, my laser lab would be fine as we have some nice facilities and those labs are also air conditioned… except that AC unit was installed sometime in the early 90s and is now mostly running on wishes and dreams. And despite a 1/3 of the building wishing very hard, the AC unit stopped working about a month ago and has showed no signs of magically fixing itself in the days since.

For me, this means I have a choice – I can either turn on my lasers and play a game I like to call “see which component fails first”; sit in my office staring in to space and dreaming of polar bears; or option 3: steal all the office AC units off my bosses and jury rig them to cool my lab. I went with option 3… 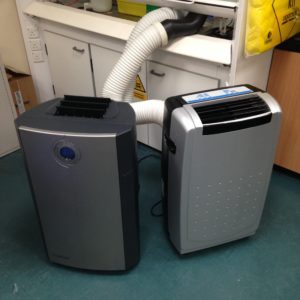 Now option 3 has had two effects. Firstly, my laser lab is a very reasonable 23 degrees and the lasers are working perfectly. Secondly, my boss has suddenly got very interested in fixing the AC system and has sent out all kinds of e-mail marked ‘Urgent’. In fact, I have noticed a very clear correlation between his office temperature and his concern for our labs. Of course, correlation is not causation and I couldn’t possibly suggest that might be related… Just an interesting point…

[ed: you’re so getting fired!]

But it’s okay, thanks to all that Prof pressure, the AC is getting fixed and might actually be up and running in time for the next heat wave…. Well okay, not really, but I bet they fix the problem it has at the moment in time for another part to fail by the next heatwave. By my calculations, we only need 10 more mini-heatwave AC failures before we’ve replaced the entire system!