Now for those not in the UK, work experience is meant to be a 1 week placement in a company or place of work where the student shadows someone and learns what it’s like to do that particular job. For many students, this is the first time they’ll ever have seen a work place and more importantly, the first time they will truly understand the concept of a coffee break. Essentially, they’re give a small window into a world that is normally pretty opaque. And if there is one window that is definitely pretty opaque, it’s the one at the top of the ‘I-can’t-belive-it’s-not-ivory’ tower that is science. 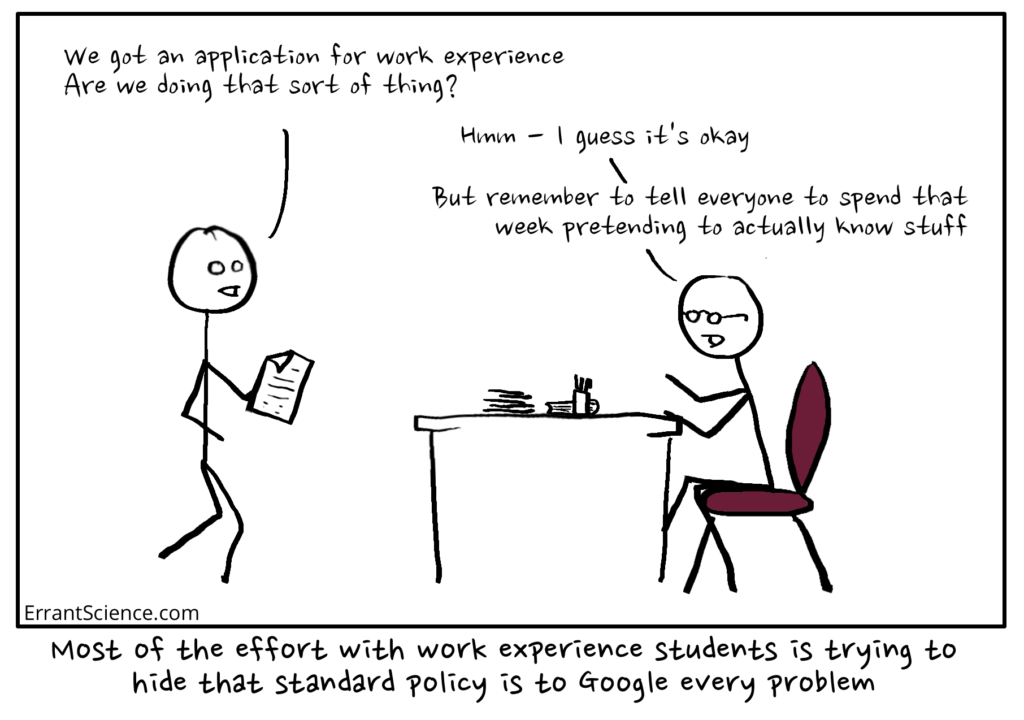 What is the Nuffield Foundation?

Firstly, the Nuffield Foundation is essentially a funding body. Like most funding groups it was given a big pile of money some time ago by a Lord Something Something to do X, Y or possibly Z. I think their About page is a bit more specific, but you get the idea.

Paraphrasing from their site, their remit is broadly to use the money to help disadvantaged children. This has several parts to it but they do everything from funding research programs, to studying the education gap between rich and poor, while also providing funding to actually plug that gap. Essentially, they both care about telling people how bad it is, while actually trying to fix it. The student placements are one such fix.

Why is this different from work experience?

In my previous article on work experience, I mention that one of the biggest problems is that it is entirely dependent on who your parents know. As a 16-17 year old, you’re not exactly likely to be all that well connected – and so the only work experience you tend to get is from what your parents can arrange. Don’t have well connected parents in a field you want to work in? Well tough.

The Nuffield student placements are by contrast specifically targetted to help people who are unlikely to have any such connections find placements that they wouldn’t otherwise get.

We particularly encourage students who don’t have a family history of going to university or who attend schools in less well-off areas.

But they don’t stop there. They even realised that asking students to take an entire holiday off to go work for free might be difficult in households where even a part-time job can make a huge difference.

We make sure no-one is excluded on a financial basis by covering students’ travel costs. Some students may also be eligible for a weekly bursary in addition to travel expenses.

In short, they put their money to making sure that no-one misses out for any reason other than their aptitude and enthusiasm for science.

I’m trying very hard to stay professional and keep it together, but I may actually love the Nuffield Foundation.

What kind of project?

The project can be in a huge variety of areas but needs to be at least 4 weeks long, and try and be a nice self-contained project that the student can take some ownership of. Giving them some repetitive QA work for 4 weeks is hardly giving them a chance to try things out themselves.

In our case, in exchange for a 3 sentence description of the project and a single form of small print saying we promised not to rename the student Igor and involve them in a plot to raise the dead, we were sent a CV and a cover letter. And after some reading and some minor embarrassment that they were predicted better A-level grades than almost anyone else in the  department, we accepted them.

The project we had designed was to give the student a Maplins robotic arm, a Raspberry Pi, a vague online tutorial to combine the two and the lab with the least dangerous lasers. Amazingly, even with these vague instructions the student then managed to do some pretty amazing things which included: playing minecraft, arming the robot with a 3D printed sword, controlling it by tapping crudely drawn arrows on paper and finally, wedging in some extra electronics and making it much more accurate.

All in all – pretty darned impressive!

For us, it was honestly pretty simple. We planned out a project with several levels, which the student could work towards. I feared either making the project too hard or so easy that they were finished in week 2, so I had put together a project with aims that we could expand/contract depending on the student. Which for any programming is often pretty easy because you just give/take away features as needed.  The only other thing that held us back a bit was that we needed to also give them a project that had a H&S risk score so low that a toddler with a physic ability to find live wires could do it. But a kit robot and a Raspberry Pi is almost as low risk as it gets without just giving them a bag of cotton wool to play with.

The day to day running of it was also a lot easier than I had feared. Having a student for a week is pretty intensive but having them for 4 weeks spread things out a lot. By the second week, my main role was checking on them 2-3 times a day and making sure they actually took a break. Kids these days work way too hard!

The project we gave them wasn’t just invented for the sole purpose of being a Nuffield Project. It was an actual project that we wanted done at some point but it never quite jumped to the top of anyone’s priority list. So at the end of the project, now they have completed the work, we’ve been left with a system that we actually need and will now be using in future projects.

As I probably made clear, I love the idea behind the placements and I think they are a great solution to one of the biggest problems with helping to balance the gap between different social groups and their access to STEM subjects. Obviously running the placement was work but it was work that felt productive and well placed. I’ve done a lot of outreach stuff over the years, some can be well meaning but not really all that helpful. Running a Nuffield Placement is not one of those.

We’re going to host one again next year, for sure. Although next year, before giving the student a robot and a 3D printed sword, I may get them to program in the laws of robotics first. Either that or put a line in the H&S about the risk of being ‘shanked‘ during their placements…