Failing to set up a new lab

We’ve had a bit of re-jig in my labs and I’ve just sorted out a larger chemical lab space. In the last year, the area in work in has doubled in size and we needed either a bigger lab or to get a lot friendlier. So after months of wrangling with politics, and at least one fight to the death (RIP, Jimmy the lab spider…) we have negotiated more space.

Now this isn’t a big move (the lab is twinned with my existing space) so we’re not going all out and hiring a proper moving company. Essentially, we’re starting with a blank canvas and now have to turn it in to a workspace we can all use. The first step in this process is coming to terms with how utterly impossible that is. 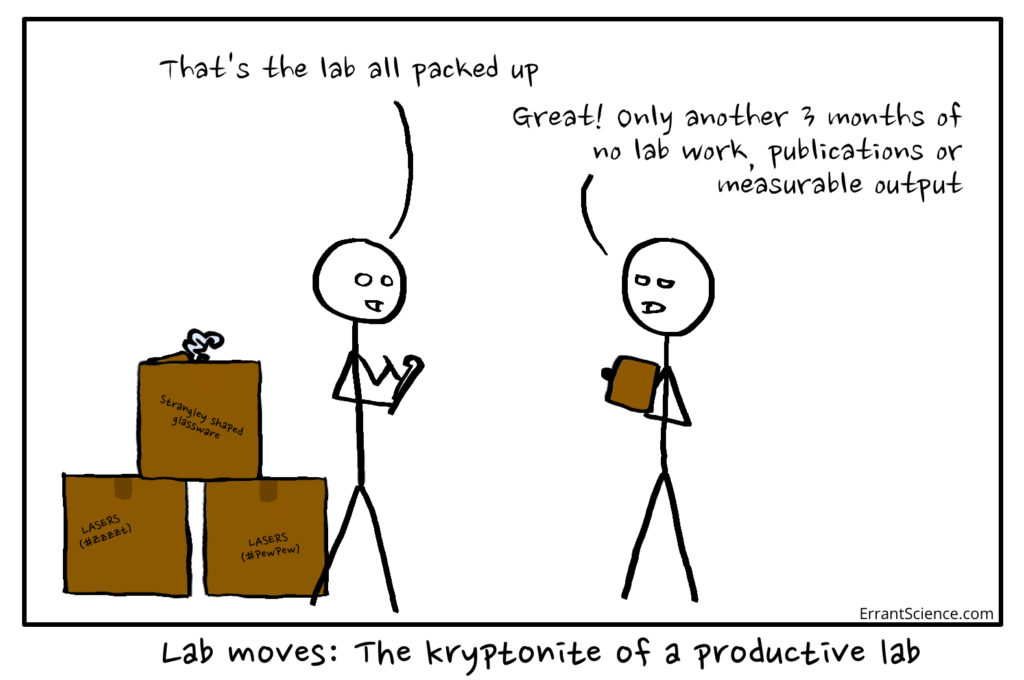 Obviously you try to get your new lab to work as efficiently as possible, and you draw up plans based on experience – and what the Magic 8 ball told you. On paper, your idea is perfect – everything has a place and everything works. It will look neat tidy, and almost certainly involves a Tetris-winning efficiency of a space. Full of enthusiasm and hope you then enact this plan…

Firstly, nothing fits in the way you thought it would – equipment hangs over the edge of benches because you forgot that the plug sockets stick out. Then you discover there’s a slope on the other bench that is causing problems for your other machine –  so you have to swap them. Heaven help you if you have equipment that causes interference with each other, otherwise it will become more like organising a wedding seating plan with various attendees who won’t sit together because of what Aunty Jane did in 1996. One by one, a litany of minor, unforeseeable problems spring up and you slowly move things around. Eventually, the perfectly tessellated lab become more of a series of chaotic piles.

At first most people resist this. They hate seeing their perfect plan slowly crumble to nothing, one piece of equipment at a time. Bit by bit, the room is changed to some perverse evil version of the detailed schematic that you originally drew. But they shouldn’t, this is all part of a natural process – it’s hard but it’s far better to just let it happen.

Eventually, the lab will be back together and everything will almost all be wired back up. There will be a few weeks of teething, while IT realise that the computers have moved and make whatever arcane sacrifice is required to get the network ports operational. But in the main, the lab will be moved and you can now begin the real process of organising it. Everything up to this point has really just been an exercise in feeling organised. Up to now, nothing would have helped. 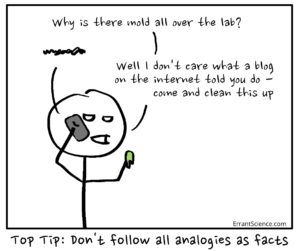 This final stage is much easier as it requires almost no input. Did you know that if you grow fungal mould on a plate with little islands of sugar, the mould will slowly grow and develop a highly efficient network between the islands? Much the same will happen in the lab. By releasing the researchers (mould) into the lab to work, they will slowly work out the most efficient way to use the new space. And one advantage they have over mould is they can move the equipment around to best make use of it. Slowly over time, the mould (researchers) will find the most efficient state far better than any paper-based plan.

So that’s the stage I’m now at. I’ve released the mould and I’m hoping that soon my lab with be a beacon of efficiency. Although, I work in my labs as well so technically I’m the mould in this analogy…. I may want to come up with something better when I explain this to my boss.