So in a slight change from my normal format I though it might actually be good to share some stuff that I use in the labs that is actually pretty amazing. Today – running my lab book from evernote.

I’ve written before about electronic Lab books but I really felt it needed an update, especially as I’ve been using it for 2 years now so I’m a bit more knowledgeable about it and I can share that extensive knowledge… 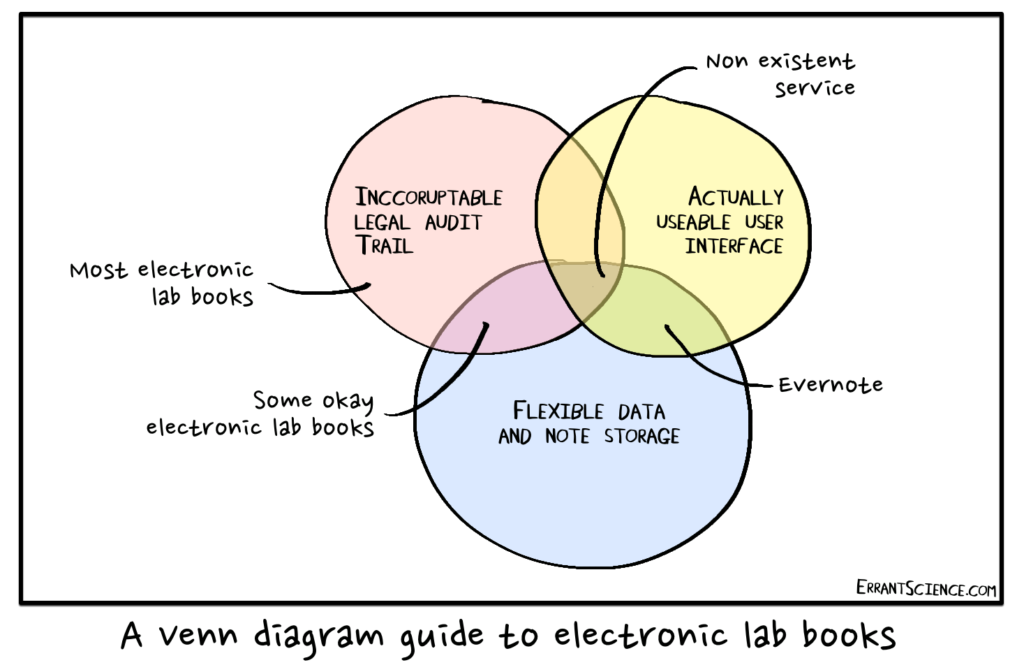 If my concise summary isn’t enough then I have also prepared a few extra things below to help persuade you that as a service, Evernote makes a pretty good lab book.

Things it can’t do

Before I get too cheery about it, I have to be upfront about some of the issues with Evernote. It’s an electronic not physical record, there is no sign off or super secure digital stamping that will stand up in court. If you’re legally obliged to keep lab books that have to be signed off every day by your lab manager, the company lawyer, the CEO and the CEO’s cat, then this probably isn’t going to work.

However, if you’re like the vast majority of researchers currently using a slightly beaten up notebook that was cheap in WHSmiths, then this is for you.

A place to throw stuff into simple notes

Evernote’s name is a dead giveaway to the fact that it’s really good at allowing you to write notes. Firstly, I can write notes using their website, a program on my computer, an iPhone app and a tablet app. Basically, they support almost every way possible to get stuff into their notes.

The notes themselves are also pretty well set up. They are obviously more focused on text input but you can do a few nice formatting things like add check boxes, numbered lists and have the near vital ability to insert tables. But you can also add in a load of multimedia bits as well. You can upload images (including directly from the camera), attach files (PFDs or datasets) and even record audio to attach.

Personally the camera ability is absolutely my favourite bit. So many experiments now get photographed and added to my experimental notes, as well as serial numbers and even settings on various bits of kit.

Getting information down is one thing but the thing that any good lab book needs to have is the ability to actually manage all of the notes you’re producing in a way that means you can actually find them again.

Again Evernote rocks this. Firstly, all notes are searchable. If it’s text in the note then the search function will find it. But in addition to this fairly inaccurate method of searching through data, you can also give every note tags so that you can easily look at a sub-set of reports with the same tag.

I use this to tag, for example, all my buffer prep experiments with “buffer prep” so I can quickly get a list of all my previous preps and find the one I now need to repeat. I also do this with batch numbers. I make a lot of sensors and sometimes a particular batch end up showing particular problems that I might not spot for a while. So by putting all my batch numbers in tags, again I can quickly show every experiment that is affect by a particular batch.

But tags and searching are really on the ‘small groups of notes’ level. You can also group all your notes in to specific ‘notebooks’. I keep one for each project I’m working on so that my notes are all nicely separated – I even keep one for Errant Science drafts and projects.

I work in a lab with other people. Sharing methods and techniques is a big part of what I do. In my days of paper lab books I had to just lend people my lab book to photocopy a method from and then spend about an hour helping them translate my terrible writing.

Evernote has a feature where instead of doing all that, I can just e-mail people a link to a specific note. By default all my notes are private and I’m the only who can see them, but when I share a note it makes it readable to anyone with that specific web link. They don’t even have to be Evernote users to read it, it just shows up in a nice everyone formatted webpage. Which makes sharing with my slightly web 2.0 phobic boss much easier. Links are good, installing apps or signing up for accounts isn’t going to happen.

Nothing lasts forever. Like any good scientist sooner or later you are going to burn a hole in the wrong wall, or blow up one too many students and you’ll need to move on to another job. And most employers are sensible enough to ask to at the very least, keep accessible copies of your lab book.

Luckily this is as simple as everything else in Evernote. Every notebook can be exported as a nice folder of HTML files complete with an index file to quickly find specific notes.

When I first started using Evernote this was one of the first things I looked for. Not because I figured I was about to have to transfer universities but actually because I didn’t have that much faith that Evernote would last forever. But they are still going strong and it’s nice to know that if they ever do dissolve it’s pretty easy to save my work and arrive everything I have with them.

As I think I’ve set out fairly well, Evernote is not perfect, but it works. It’s easy, cheap (I’ve never needed more than the free version) and reliable (I’ve not had a single server error or corruption in the 2 years I’ve bene using it). If you are even slightly curious about trying out this whole electronic lab book stuff, I really recommend that this is the place to start.

Have you tried integrating this with Rocketbook yet? I find the book itself useful but haven’t had as much luck using the print-at-home paper – my notes on this just seem to messy for posterity!

Hi, I just found out your blog trough an Tweet. I’m a chemist and I looked a while for the perfect solution. I think you should try elabftw: http://www.elabftw.net/. I’ve been using it for 2 years now, and I find it amazing. It can provide a solution for (almost, I think) all the points you mentioned, especially stamping. It’s developed by an engineer at the Curie Institut. What it does: text formatting (tables, links, images, etc), edition of molecule, tags, templates for experiments, comments on experiments, users (to manage a team), history of edition of an experiment, file upload (you can attach data files to an experiment, so you keep everything in one place). It is free and open-source, and you can ask the developer for new features (that’s a real plus). Also, you can install it on any server you have access to, so you keep control of your data (not like Evernote). The little downside is that you have to have minimal knowledge of system administration, to install it on a server (but that’s easy, the procedure is detailed on their website). Cheers !

We’ve been using Evernote as a lab notebook in an academic settting for 10+ researchers since 2011. Works like a charm. One of the features we’ve found to be useful is Evernote chat, which allows you to share notes with colleagues on the same Evernote Business account and have discussions. Wish the chat feature were as good as Slack though.