My dad once told me that if I ever do anything that I care about or are really proud of then the only person responsible for telling people about it, is me. No one else is probably going to be as motivated as me about sharing something I think is amazing. And if I can’t get excited about sharing my work, then why should anyone else. No matter what job you have in STEM at some point you are going to need to stand up and point at your work and say “see that, I did that – it’s not terrible”.

The very first time you do this is probably when your mum asks how your first day at work went and what is it exactly that you do, then meetings where you are asked to justify your role in a project, or to talking at a school’s careers fair. But in all these cases you don’t just describe your work, you describe it in a way that fits both the situation and the audience. And with that, there is a thin ethical line that is tricky to walk between clarity and shameless promotion.

For example, here is a description of my work:

I modify fiber optics so that they have short sections that are sensitive to chemical changes.

Alternatively, I could describe it as:

I use fiber optic holograms to access quantum electromagnetic fields to measure changes in the chemical properties of nanomaterial  films.

Technically both of the above descriptions are true of my work… although the inclusion of ‘quantum’ is probably a little suspect. But the latter sounds so much more complicated, and probably expensive. If I really wanted to make someone think that my work was clever and interesting then the second is clearly the way to go. The first one sounds almost mundane and simple, certainly not a project that someone should invest lots of money in or want to be a part of.

Of course if I was to go full ‘headline’ with it, then I could produce something like this: 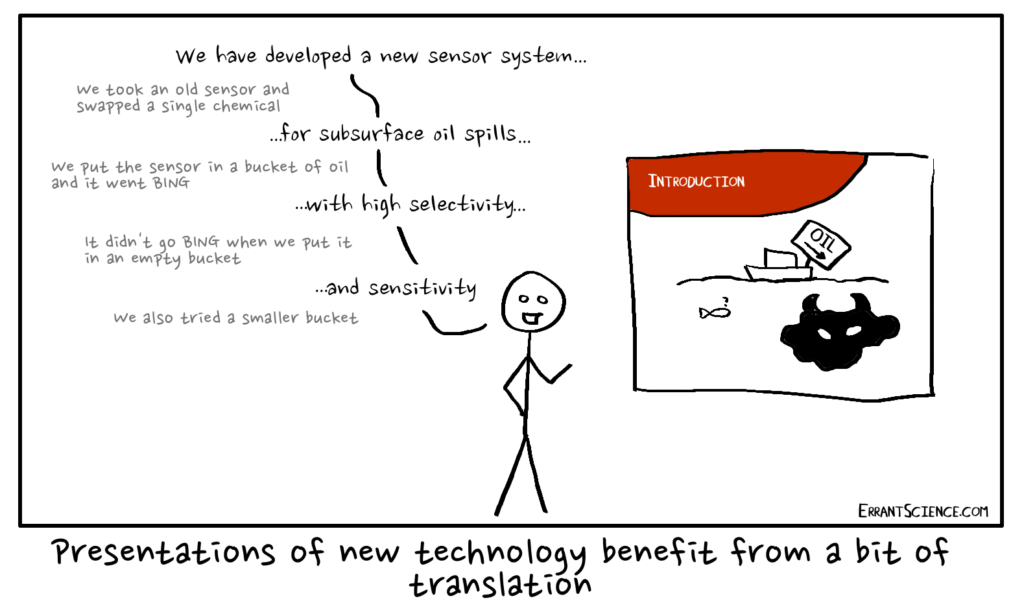 Again, it is technically accurate, as the fibers I use are also used to transmit data, and one of my projects is to detect hydrocarbons in water. But can I modify existing internet optical cables to be sensors? Not really, but it’s just about possible I suppose. Can I detect oil spills? Well, I detect things associated with oil spills, but I’ve not actually tried finding it in the ocean yet. So again yes, technically.

What’s really happening here is, I suppose spin, scientific spin. It happens plenty of times when science is reported in the press or a company has a new project that it wants to sell. Even at conferences, I see plenty of talks where a pretty simple technique is being discussed as though it’s a form of cold fusion that produces cheese burgers as a byproduct.

The key is really knowing where the line is between selling and flat out misleading. Which is tricky, because no one has a agreed a line or signed up to any kind of International Code. Where that line is, is very subjective and differs hugely between people. There are obviously projects that are so far over this line that the line is doing a good impression of being a horizon. But anything in between is a bit more variable and vague.

But until I manage to work out where my line is for describing my work, I’ll just continue working with my quantum electromagnetic holo-fiber.