Hey matthew. How are you? I wondered if you’d be interested in writing a guest blog on my website for my upcoming game I designed with my partner? Not sure if you’ve seen it but its a board game where you play as a lab to crush competitors for scientific glory (LabWars) being such an awesome science communicator i wondered if writing something for us would take your fancy? Let me know 😊 – @CAljassar

Now just to be clear, I don’t write blog posts for everyone who calls me an “awesome science communicator” – Caezar also promised to buy me pizza and he let me come along to his board game night. I am highly amenable to bribery…

LabWars was pitched to me as a science-based board game, with an emphasis on recreating a little of the competitive nature of science and research. I am a bit of a board game nerd so a fun science-based game sounded pretty amazing to me. 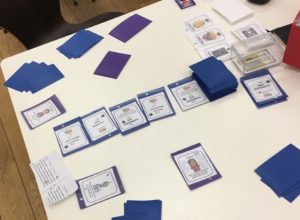 The first version of LabWars I got to play

I actually got to play Lab Wars twice. The first time was in February when the game was a blend of printer samples and hand cut bits of paper. At this little play through, Caezar showed me one hand of LabWars while furiously apologising for it. He came across more like a nervous parent than a bold creator. I have to confess that while it looked tons of fun, it was certainly a game with a fair share of rules and while I was pretty sure I understood the basics, it seemed like something I was really only going to get the hang of after a strong coffee and a lot of practice.

The second time I got to try it was more recently in May and everything had changed. The hand cut parts had been replaced with professionally printed cards and pieces. The rules from last time had clearly been savaged by someone with a hedge trimmer, and Caezar was even being cautiously positive about it. Not only that but I was even allowed to play a full game from start to my crushing defeat.

My team of academics 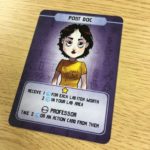 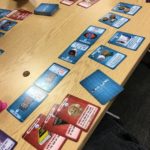 My ‘lab’ near the end of the game, I lost very soon after this

I tell this story as an introduction to my review of the game because I was impressed that I got to see some of the way that LabWars was developed – by people who loved games and really wanted to make something fun and interesting even if it meant revisiting and revising their rules. In the gap between my two testings, I’m told they took their game to more play testings and from those comments made extensive changes. Listening to advice and feedback is a really, really good move for any project starting out, particularly in something like games development.

Now LabWars is a card game with a handful of cute little counters, for 2-4 people. You start with a pre-set layout of cards and a handful of variously coloured things. Very basically, a game is structured like this;

In addition to all this there are various cards you can play on the other player/s to ruin their carefully planned out gathering of research points. These action cards include things like ‘radioactive sabotage’ which, given that I once working in a lab with a radioactive source hiding in the sink U bend, is genuinely a real lab hazard.

I can’t remember how long the game took but I had got the rules pretty well understood after 2 rounds and I judge games not on how long they take, but on how long it takes for me to understand it and start having fun – 20mins is pretty good for a new card game I’ve never seen before, and at least 5 minutes of that was laughing at the designs!

I lost the first game. Free pizza was one thing but Caezar wasn’t prepared to go easy on me and he scooped a Nobel prize to rack up an amazing number of points. I’m not a sore loser but Caezar clearly cheated and the game was rigged and also the sun was in my eyes…

When I first saw the game, I asked Caezar who the game was targeted at and he said it was aimed at gamers who were also scientists and were looking for a science themed game. And in the first version I tested I would have agreed, but Caezar and Kuly have really refined Lab Wars and I think anyone would have fun playing this.

Do I recommend this game? Yes, I think I do. It was fun, you can pick it up in about 20 mins and £19 is a steal compared to most card games. And as a blog that spends its time laughing at science, I love that this is a card game that also enjoys seeing the lighter side of STEM.

I certainly liked it enough to back the Kickstarter myself.

Cool ! I’d love to play this game with you 🙂