Days when nothing works

I have had a bad day. Okay, that’s a lie – I have had a bad week. It appears after years of abuse, misuse and seemingly minor neglect, my equipment has finally had enough. Not only that but it appears to have realised that individual action wouldn’t be enough and has unionised and gone on a general strike. Unfortunately, their grasp of negotiation seems a little less mature than their understanding of the finer points of the Labour Movement, so for now they just are just sat on my bench in various states of not working, with unspecified demands.

I can only hope this kind of Bolshevik nonsense won’t spread to the students. I mean can you imagine a world where the students refused to work because of the unspeakable working conditions. I shudder at the thought.

Unfortunately once some equipment goes, I tend to find other parts of my day start pitching in with a show of solidarity. For example, my lab air-conditioning isn’t working. Given the temperature sensitivity of some of my experiments this is a bit critical. But I had a cunning idea of using the portable A/C units from the offices on the 2nd floor. Sadly the lift was part of the revolution and had mysteriously stopped responding. The A/C units weigh about 50Kg so I’m not carrying them down 2 floors by myself.

But even without modern technology, we have people who can help with this – building services. A message to whom was somewhat predictably answered by an auto reply saying they’re out of the office for a week. It’s okay they left the name of a person to contact in their absence – fantastic! Although it would have been a lot more ‘fantastic’ if that person hadn’t also been on holiday and had an auto reply which pointed me to the first person again.

There’s a good chance both these people are in and working but actually it’s just the auto reply system that has joined the revolution. It’s not paranoia when all of the equipment is really out to get you. 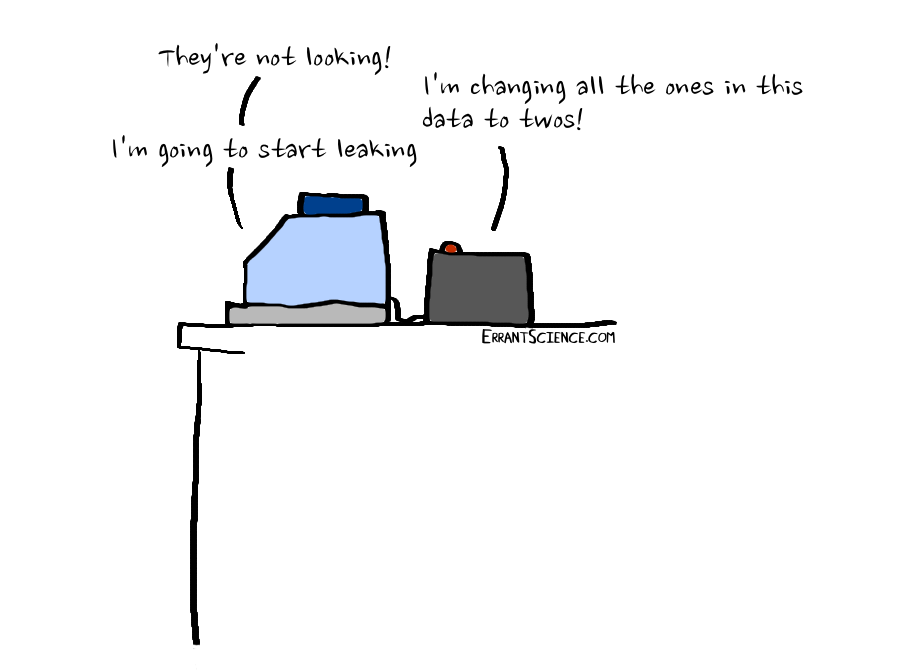 Never one to be beaten by mere technology, I can do a lot of science while sweating gently in a hot lab without having to use a single piece of Red Peril brand electronics. However, by the time I accept this fact I am normally tired and more than a little testy. Neither of those two things make for good controlled science so like a moth to a lightbulb painted to look like a very sexy moth, I am drawn to making simple basic mistakes. For example, instead of weighing out 0.01g of KOH I weight out 0.1g and dissolve my nice glass fiber sensor that took 15 hours to make after a very reasonable 30 minute incubation.

At this point I tend to give up and take to hiding in the office until my non-electrical wind up clock (clockwork is always happy to break equipment picket lines) ticks round to home time.

But at the end of this epic day of terrible continuous drip drip of scientific horror, there is occasionally a light. Just before going home often I get a flash of inspiration of something crazy to go try that might just solve it all my problems. So off to the lab I rush and stay a little late to run one more test, that promptly makes an ominous ‘FWOOSH’ noise and dies.

Sometimes the light of inspiration is actually the warming glow of your equipment on fire. 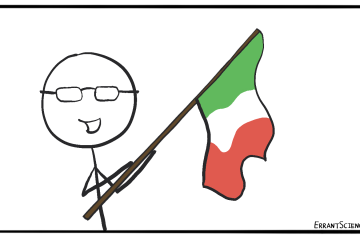 So we’ve been making ErrantScience in some form since 2012 (this year actually marks our 9 year anniversary). Since then people from all over the world have read and (hopefully) enjoyed our cartoons, blog posts, Read more… 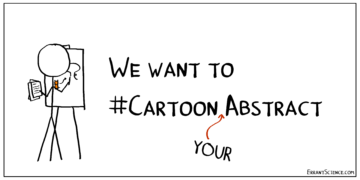 Get a cartoon abstract for your work

So we do lots of things. We write stuff, we do live talks and we draw cartoons… a lot of cartoons. The cartoons we draw are a mix of the random thoughts of the cartoonist Read more…