How to deal with uncertainty

Uncertainty is a part of life – heck it’s a part of reality as a whole (thanks, physics). Predicting the future with absolute certainty is tricky because there are just too many factors that might influence it, many of which are well beyond our control. No matter how much you plan and consider all the outcomes, you have no power over external problems coming in and messing up your day.

Say for example some unnamed country was to vote on whether or not it should slap itself hard in the face. You can’t say for certain that 51.9% of the electorate won’t be conned by an idiot in a tweed jacket into thinking that all patriotic people want to be slapped in the face. Or that a man wearing a disheveled long haired siamese cat for a haircut won’t persuade everyone that he can afford to pay them all £350 if they accept the slap. 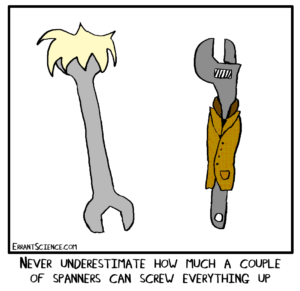 Those are obviously ridiculous examples but they highlight my point that no matter your planning there is always the possibility that a couple of total spanners could mess it all up.

Just last week I lamented that my air condition was broken, which was unexpected and a massive pain in the arse. So basically everything is slowly grinding to a frustrating halt while we continue to wait for someone to come pressurise something, replace something else and turn a third thing back on. I’m powerless to make that go any faster, other than being nice to the repair people and offering them tea (happy repair people work faster).

Other examples of unexpected lab hold-ups have included : A reagent that should have taken 2 weeks to arrive suddenly getting held up by a vet at customs who wants to know what the clear liquid in the clear vial clearly labelled “Anti-PSA antibody” is. A sudden family death the day we were due to start a co-ordinated 3 country FDA trial with 250 patients. And maintenance causing noise in the mains electrics and making all the equipment go nuts.

One thing you can do at the start of any project is to look at all the parts of the project and ask yourself “What if this vital ingredient was suddenly banned by the UK government as a psychoactive substance?” or “will the deadline change if the United States of Trump invades?”. This is called a risk assessment and is always a slightly strange way to start a project, imagining all the creative ways it might totally fail horribly. 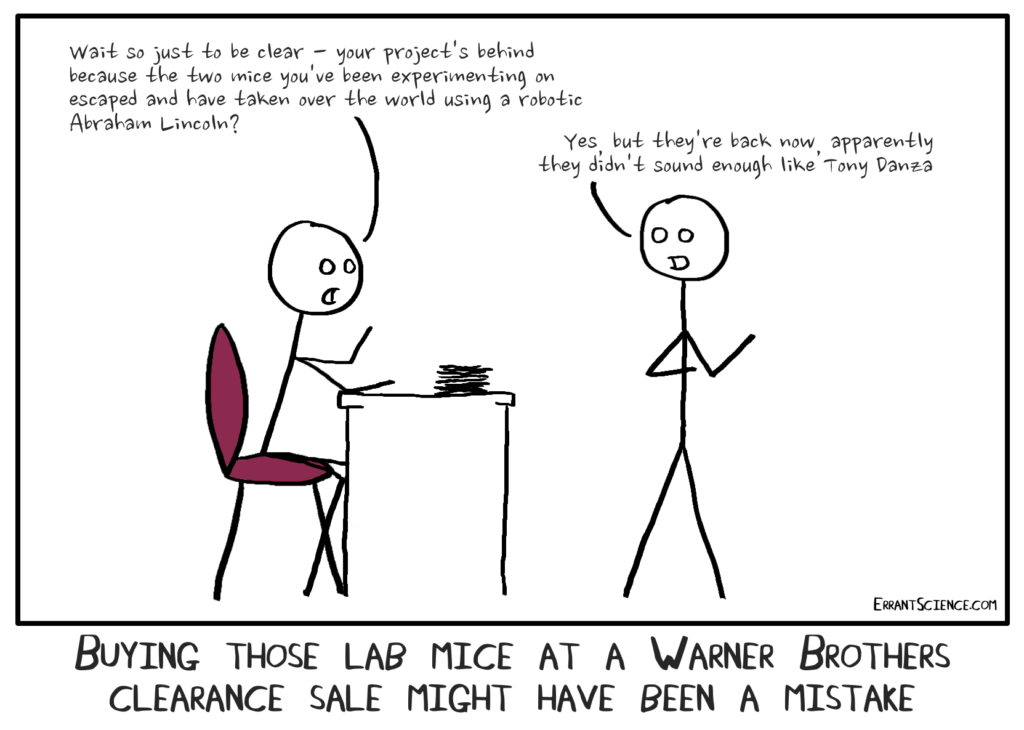 But eventually you have to actually start working rather than just dreaming up impossible scenarios. And inevitably there will be some scenario you won’t have planned for that will ultimately befall your lab. It’s these moments when you have to kick your internal problem solving science self into high gear.

It’s amazing how much science was done before people had temperature controlled labs, reliable laser systems or even working electrics. Yes, things go a lot better with all those things, but that doesn’t mean you can’t adapt and find ways to work around them.

Labs currently running at 30 ºC instead of 25 ºC? Great do some higher temperature experiments to compare to the data collected at 25 ºC. It’s not ideal and almost certainly wasn’t in the plan but at the very least you’re not sat staring at a temperature gauge in the hope that you accidentally discover mental kinesis.

Uncertain things are bound to happen, the trick isn’t to flip the lab bench and walk away but to find something productive and get on with it.