Why you should prepare for lab disasters

In the last month, my lab has been flooded (twice). Also major infrastructure (air handling) has failed more times than I can count – even the log files on the control panels have stopped counting… although, they have actually stopped doing basically everything so that might be part of the problem.

The first flood was an act of nature. A cruel evil nature that decided that, rather than rain at a constant rate over a few hours, it would just get it over and done with in about 2 minutes and totally overwhelm all the water drainage we have. This killed about half our electrics and crept worryingly close to our chemical storage.

I’m semi-confident that the various containers my chemicals are stored in are sealed well enough to cope with a little paddle but given some of the chemicals involved I’m not sure I’d really like to find out. Or if I do need to find out I hope that I am a very safe 500m minimum distance from the building. Preferably on the side without the hydrogen cylinder.

But our advanced planning kicked in immediately after this damp disaster and we swung into action enacting the “that’ll never happen, don’t worry” plan. As it turns out this was a terrible plan – who would have thought. 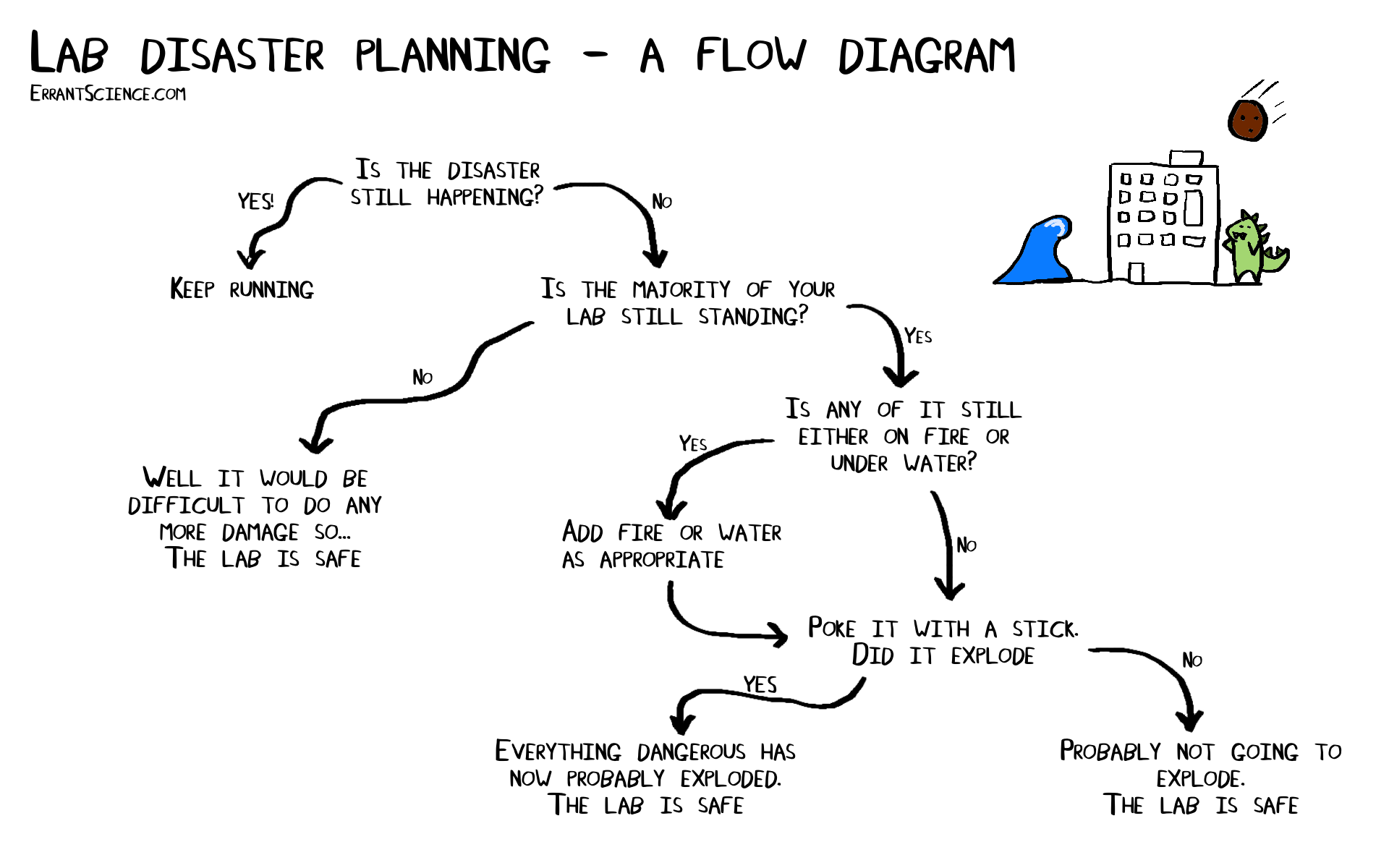 Firstly, a message went out saying that we should, on no account, go to work – which was immediately followed by another message from a different person saying everything was totally fine. The lab, it turned out, was totally not fine – half the electrics were off and no-one quite knew why but was happy to test them while standing in puddles.

The second water-based disaster went a little better – it was more local so a crack team of electricians arrived within 10 minutes and started scratching their heads and tutting. After they had a nice wade and a ponder they decided that the first thing they should do is check to see if the computer was still on (the one with the water dripping out the monitor) by wiggling and clicking the mouse. Dutifully the computer in sleep mode click off and it began booting up and making wet whirring sounds.

Now I’m not a trained electrician but honestly that didn’t seem like the best idea. The computer has singularly failed to do any whirring of any kind since but I guess it might have been happy to be woken up to have one last play in the water before dying.

Maybe it’s us, maybe we just suck at disaster preparedness. Case in point, our emergency contact system was e-mail, which many people don’t check until they come into work. I can’t help but feel that we might have considered something a bit more reliable like singing telegrams or asking a bystander to ‘pass it on’.

Disasters are sudden and unexpected (mostly). They rarely let you know a few days in advance that they are coming between 2 and 6 in the afternoon but if you’re not in will leave a card. When stuff goes catastrophically wrong it tends to do it in a giant big way that really messes up your day.

Prepping for it isn’t all that difficult either. Most disasters have a pretty basic formula of either ‘Lab destroyed’ or ‘Lab not destroyed but give it 5 mins and maybe’. Putting in place a little simple planning sounds pretty easy.

e.g. If there is a Superman-sized shape missing out of the side of the wall and there is a Kryptonion soldier wedged in the NMR, then no going in until the lab manager says it’s okay. Not even to check if they knocked your laser alignment.

My take home from this post is – look around your lab and think to yourself “What if a local farmer accidentally let a bull out which then, through a series of humorous accidents, acquired an access card and got into the lab and then ate all the cell media and tried to ‘get personal’ with the GC-MS”. Seems unlikely now but you’ll thanks me later.