A discussion about the US election and a rainbow

I’m away at a conference this week, so being the highly organised blogger I am, I had a blog post already prepped for today. But then the US election happened…

Now you might not know this but the most contentious cartoon I’ve ever made is of a rainbow pie chart which declares that everyone can do STEM. When I first shared it, it did quite well around the internet and went quite a bit further than my normal cartoons. Mainly, it was shared by people who loved that it was a cartoon about inclusivity and wanted to support that. 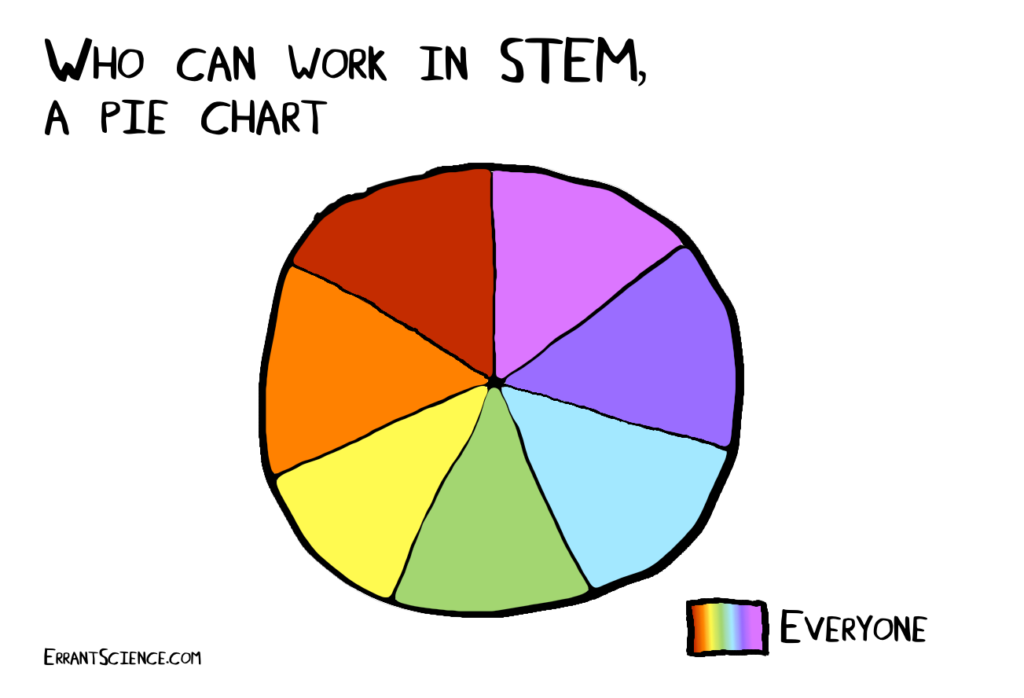 However, bigger reach means that it broke out from my normal bubble of fans and entered the vast general populace. Almost instantly, it started attracting some criticism:

How about people with a god damned degree in STEM ?

What about people from religions that actively hate science?

Does “anyone” include people that cry every time her experiment fails?

That is a sample of the pages of comments on this I’ve received in the months since it went online, some publicly and some messaged personally to me.

I’m not going to explain what’s wrong with them but I think it’s fair to say, I disagree. I drew that cartoon because I honestly believe that there isn’t a single person who, given the opportunity, can’t work in STEM.

But I fear those already unbalanced opportunities just tipped violently to one side.

Today sucks. Today, a demonstrably hateful person won the US election. A person who has, given every opportunity, mocked, belittled, and marginalised anyone who doesn’t fit a very particular cookie mould that for some reason only works on pale dough.

The next 4 years are going to be tough, not just for Americans but in every country where people will look at the US election as validation that it’s okay to be prejudiced, racist or mysogenistic.

I stand by saying anyone can be a scientist because honestly, anyone can be anything. There is no measurable property of a human being that rules them out of working in science, other than the other human beings going out of their way to keep telling people they can’t. The thing that excludes people from working in practically any field is other people. And there are a lot of people who think that excluding people is okay.

My pie chart is right, but helping make people feel like it can apply to them amongst the racism, misogeny and hate is what I will now spend the next 4 years doing. Anyone can do science, but some people are going to need help standing up to those who don’t want that to be true.