Throw out all the things!

I’ve been writing this column long enough now to have formed some traditions. And tradition dictates that my first column of the year is about resolutions, or plans for the year and what I hope to get out of it. But then 2016 happened… and now I think the best thing for all of us is an article on how to clear out our labs.

We’ve all got labs full of secret stashes of stuff. Some of it is just long forgotten experiments; some of it is semi-made experiments that didn’t quite work out as easily as we thought and have been left in a demi-experimental condition; some are just completely failed experiments that have been hidden in embarrassment at how horrible they are in their failed status.

So in the interests of a fresh start, now is the time to open those cupboards and look in the fridge and find those creations. Don’t expect any of them to look the same as when you left them – in fact, don’t expect all of them to even still be there. For example, don’t leave a permeation tube full of ammonia in the fridge without expecting it to err… permeate out and make your fridge smell like ammonia.

First off get the biologicals out. Now don’t expect the biological to only be the things that were biological when you put them in. You are a great scientist and it is in your power to create life from just a bottle of PBS and neglect. While you may be excited at having created life, I’m afraid you need to wish it well but fulfil your role as a vengeful god and destroy it. Personally, I like to use Virkon which is both effective at murdering biological creations and a very pleasing pink colour. 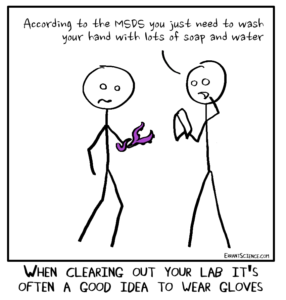 Finally, comes all the equipment and various small widgets you’ve built up over the last year. This includes the myriad of small screwdrivers, allen keys and spanners that you borrowed in March and have been using as lab filler ever since. The trick with these is to return them quietly and quickly so that no one sees you give them back. If no one sees you give them back, then you were never really late returning them. Equipment is often a bit harder as it is rather large and hard to slip back anywhere. Besides, equipment is valuable stuff – if no one is prying it out of your hands, then quietly write your name on it and stick it in the nearest cupboard.

Having a nice clean lab is a great way to make a fresh start on the year. Although, this isn’t true if your funding is due for renewal – clean labs look like you’re not working, so in that instance do the exact opposite of this article!