Published by Michelle Reeve on 27 March 2017

There are some basic unspoken rules that one should follow when starting a job in a place with a shared kitchen, be that in academia or elsewhere.

Surely these rules should be standard practice for anyone in a shared kitchen situation, if not simply for life itself. 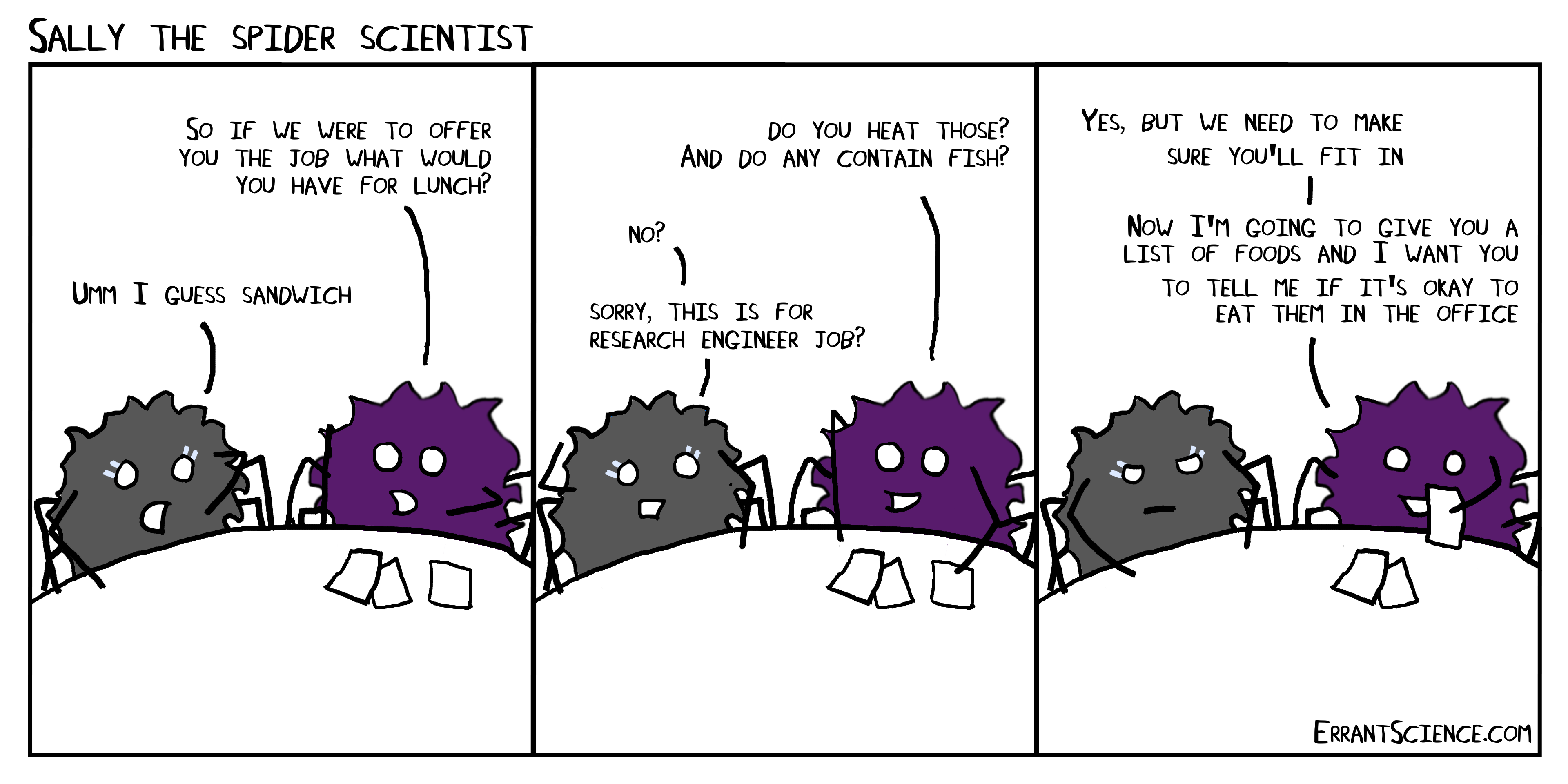 But no – apparently not. Every lunchtime is a minefield of trying to find a place on the draining board to put my washed-up tupperware and desperately trying to conceal my fork about my person to stop it being nicked – all while holding my breath so I don’t smell someone’s half-drained can of tuna. I think it’s fair to generalise when I say that in all shared kitchens, the most precious cutlery item is the Fork. There are never enough, because most vaguely interesting lunch items (except soup… that would be fun to watch) require a fork’s assistance for efficient consumption.

So when every lunchtime I hear my kitchen co-sharers curse when they can’t find a fork in the frankly limited cutlery supply, I am confused. How hard is it to bring in a fork from home alongside your homemade lunch, which you are also bringing from home? More, why not bring one from home just once and leave it on your desk at work?

Well, it seems that bringing in your own fork from home is more difficult than, say stealing someone else’s fork from right under their noses. That’s right folks, I have been a victim of FORK THIEVERY.

It was a normal lunchtime. I was smugly washing up my fork and tupperware after having cleverly brought my own fork from home and used it to efficiently wolf down my food. Surrounded by people who had yet to eat their lunches, I heard the usual mutterings “… no forks...”, and I was careful to keep an eye on my most prized (office) possession. I dried up my things, and went back to my desk. Moments later, I noticed my fork wasn’t in its usual safe-place on my desk – I must have left my fork in the kitchen! Noooo! Racing back to claim it from the draining board, I was very confused to find it missing. But… but.. I was in the kitchen mere seconds ago! How is it not there?! … And then I saw it. In the hands of a woman. Who was using it to mush up her lunch – and then I watched aghast as she licked the remnants off it. My fork was contaminated.

It had been snatched from almost literally under my nose. I knew it was mine because I am very protective of my office cutlery, and it had a big black permanent marker cross on the back of it. I was FURIOUS. Many unpleasant mutterings occurred as I followed her round the office with my glaring hateful eyes, waiting for her to finish her lunch. The moment she walked past my desk towards the kitchen I leapt up and stalked her to (probably quite rudely) claim it back. My precioussssss!

In light of this grave situation, I’ve thought up a range of deterrents to foil even the smartest plot of the office cutlery-thief.

My husband and I once discussed (with terrifying levels of seriousness!) how to electrify a lunchbox so that some thieving ingrate would stop stealing my cheese from the fridge…

This is a genius idea and should definitely should be a thing! Cheese is sacred.

I went the other way and bought a stack of cheap bowls and cutlery for the office kitchen, because the amount of frustration not having a fork can bring is not worth a grand outlay of $9.98

This is definitely another option! I’ve done this before (though in that workplace we had a shortage of cups & mugs so I brought in loads of those) and within about 2 days there seemed to be the same number of cups as before. I think each office has a maximum limit of certain items and when exceeded some of those items just implode in on themselves until their numbers are below maximum again.

I’m surprised you don’t have the ‘Passive Aggressive Post-it note as an option. Always a favourite here