Why you should start going to different conferences

Knowing stuff is hard. For a start, the word ‘knowing’ is utterly ridiculous and if I look at it for any length of time I just want to pronounce it “Ka-no-wing”. I’m sure someone will comment below as to why it’s not silly and the K is actually integral to the whole word because of its relationship to a Latin word for “fish preserves”. I don’t care. It’s a silly word.

But language aside, knowing things is also something that is fairly critical to a life in science – it’s sort of the whole reason science exists. Be it in industry or academia, knowing more things that the day before is the whole reason anyone in science does anything. Which is why it’s strange that in some places science is really bad at encouraging people to know a diverse range of things.

Scientific conferences are like huge hubs of very rapid knowledge transfer. As a method of knowing things, they are pretty unmatched in the breadth of what you can hear about. Scientists do also read papers, talk to colleagues and very, very occasionally do experiments. But conferences are the big expensive ticket item, where we all go under the pretence of learning things that we don’t know. Which is why it’s all the weirder that most of us only go to conferences about things we already know about. 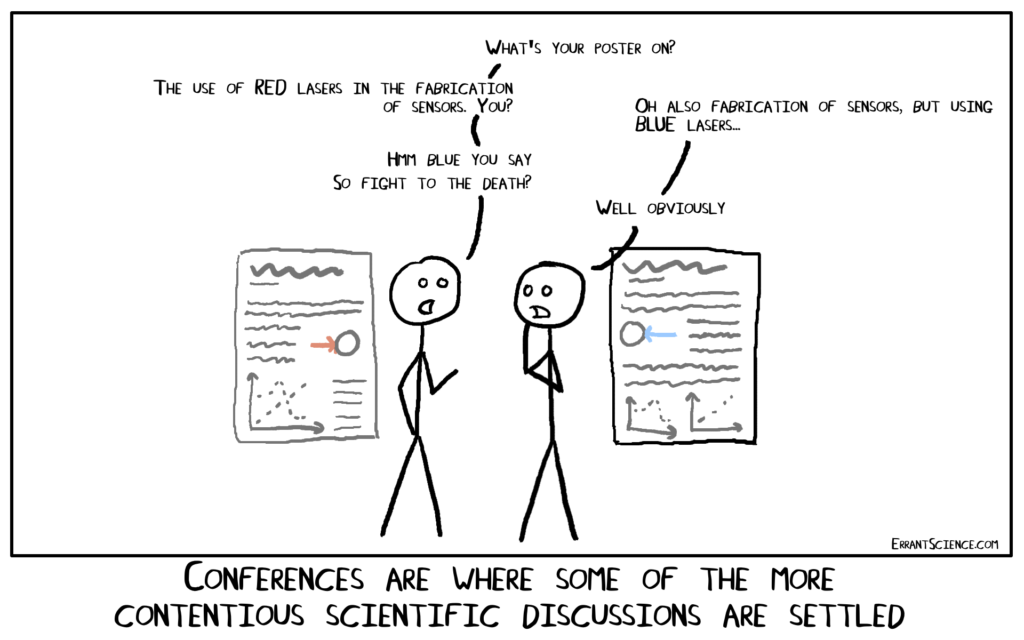 Going to conferences is expensive. There’s the conference fee, the travel, the hotel and the transport costs for my mobile lab. So given their expense, it’s fair enough that bosses are somewhat cautious in allowing just anyone to go to any conference they like. Which is why so many university departments have a very simple rule: you can go to a conference provided you have a paper accepted.

This makes sense, you’ll be learning about other people’s work AND get to show off a little of your department’s knowledge. The only flaw is that in order to get a paper accepted you generally have to submit a paper that actually fits the conference. So say for example, you’re working on traditional fishing methods but want to attend the mathematics of multiples of eleven, then you’d have to have already written a paper on its combination.

You need to have already started collaborating and working in an area in order to go to a conference in that very area you want to start collaborating in!

There is so much to be gained from going to conferences in areas either closely related or even totally unrelated to your area. I work in a lab of just 20 people and generally attended the same 2-3 conferences where I meet the same regular 10-15 other groups all of whom are working on the same areas and applications. Yes, I learn lots about my field and how it’s being advanced, but I learn so little about how it might solve problems elsewhere.

Next week I am attending the European Geoscience Union general meeting (a big geoscience conference) and I am attending as someone with almost no knowledge of geosciences what so ever (I believe rocks and soil are involved…?). Why? Well I’m hoping that I’ll actually learn something about geosciences and more importantly, maybe talk to some people about what my sensors can do for geosciences.

Personally, I think everyone should try and attend one conference a year in a different area. It would encourage us all to think of solutions that may have never occurred to us at all. Such as applying advanced mathematic design to catch more fish…