Tinkering with ALL the things!

Research tends to breed/attract people who are very subject-focused. The nature of the job tends to push people into narrowing their expertise down to a very finely focused point. This is in someways unavoidable and in fact quite required to push the boundaries of your chosen researcher area, or at least understand the boundaries enough to know how not to push the boundaries into areas labelled “destruction of all humanity”.

However, I feel like this can lead some aspiring proto-reserachers to believe that honing your academic point is the way to succeed and thrive in research. A consequence of which is they sometimes want to avoid learning new skills that they feel don’t fit the narrow range of knowledge they are aiming to collect.

Which causes people to miss out (or even avoid) one of the best skills that all researchers should learn – tinkering.

Tinkering is a time honoured skilled of either fixing, breaking or modifying things – often with no idea what the flip you are doing. Obviously, you try to avoid breaking things, but terminally breaking things is just the first step in understanding what NOT to tinker with. Besides, the best place to start tinkering with things is fixing them when they are already broken.

Equipment breaks, all the time. Sometimes because of students (they don’t actually have to touch the equipment, they have a natural aura that breaks equipment) sometimes because equipment manufacturers aren’t perfect and used up screws instead of down screws (sorry that was a terrible attempt at a joke). Fixing it is expensive, call out fees for service engineers are astronomical, a word I use here in order to compare their fees to the price of literally becoming an astronaut and flying in to space where you can get a wide enough view of the massive invoice they will have written… It can be unavoidable but sometimes opening it up and having a think through the problem might be a simpler way of solving it. I bought a humidity generator a while back that was (for want of a better word) ‘coughing’. Turns out that inside they’d managed to kink a tube, thus reducing the flow. It took about 30 seconds to tinker with, and I got it working again. 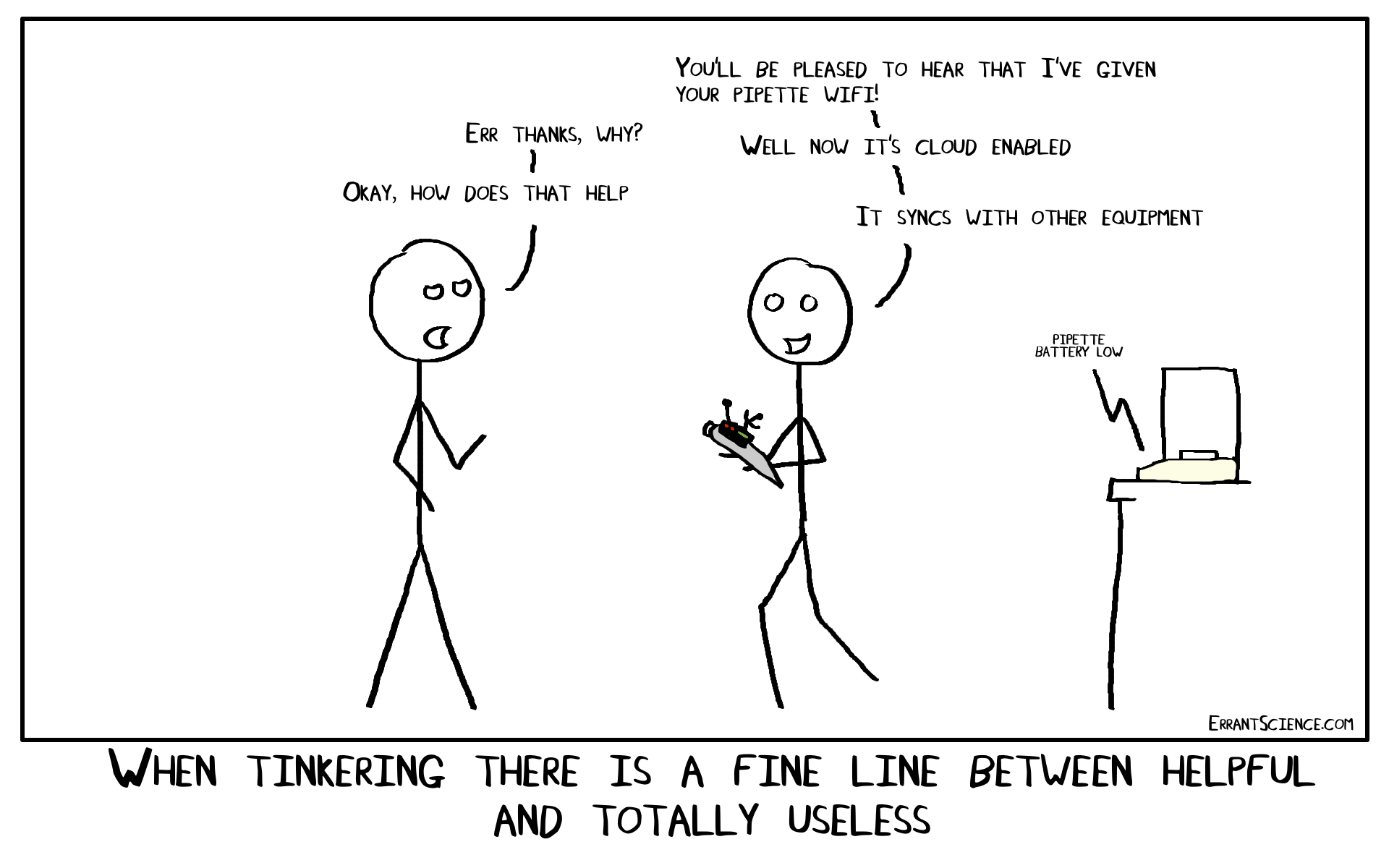 But why stop there… Tinkering with things doesn’t just cover fixing broken equipment – you can also adapt equipment to better fit your purpose. I recently purchased a new laser which was not quite the right height. We unscrewed various parts and lowered it to within 0.5 mm of where we needed it, but were limited because they’d built it with big capped screws that it was sitting on. So we bought new low-profile screw heads and now it sits exactly in the right place. Again quick solution that just required looking it and thinking “how can I fix this” and not “OMG screws those are for screw technicians to deal with!”

And you can even go so far as to tinkering brand new equipment. I know of one group down in Southampton who decided they wanted temperature and humidity monitoring of their labs, so they built themselves little Raspberry Pi connected temperature and humidity sensors from off the shelf parts. They didn’t invent new science they just found a way of tinkering some existing kit into something they could use.

So for any aspiring scientists and researchers reading this – mess with stuff. If something’s broken or something’s not quite fit for purpose don’t be afraid to open it up and have a look at it. Most of the time you’ll take one look and think “Yup, just as expected, it’s got wires in it…” and promptly call the service engineer, but every now and again you’ll open something up and maybe see how to fix it yourself, and in doing so learn a little more about the system. You don’t have to be an electronic or mechanical engineer to have a go and maybe learn something from it.

I agree wholeheartedly. I have this poster up in an instrumental chemistry lab (credit to David Malki from Wondermark): http://wondermark.com/tink8/