Research, and a legacy of terrible computers

A little while ago I got a new laser system. It’s a very nice laser system and can laser in ways that are both exciting and lasery (yay, lasers!). When it arrived it had one thing that stood above everything else as something to be excited about – it came with a small, black, dedicated control box.

Now, getting excited about control boxes is a strange thing, and many would argue possibly a sign that I need to get out more. BUT I wasn’t just excited about the control box, I was excited because what it didn’t come with was either a CD, a USB stick or the need for a dedicated laptop.

A CD, USB stick or laptop however, will inevitably contain software which will run happily on the latest version of whatever operating system is around the day the laser is installed, yay.

And maybe, just maybe the company will even support the software for the next few years keeping it up to date with new operating systems. But inevitably, they will stop supporting it. The software will become locked to one particular operating system on one particular computer which then can’t have it’s antivirus upgraded and…. “Ooops your files have been encrypted”.

In my labs alone, I know of one piece of equipment that can’t run on anything above Windows 3.11. I don’t have a computer that is capable of running 3.11 and communicating with the equipment (we tried virtual machines but no dice) so it is sat waiting for us to develop the technology to properly emulate windows 3.11. 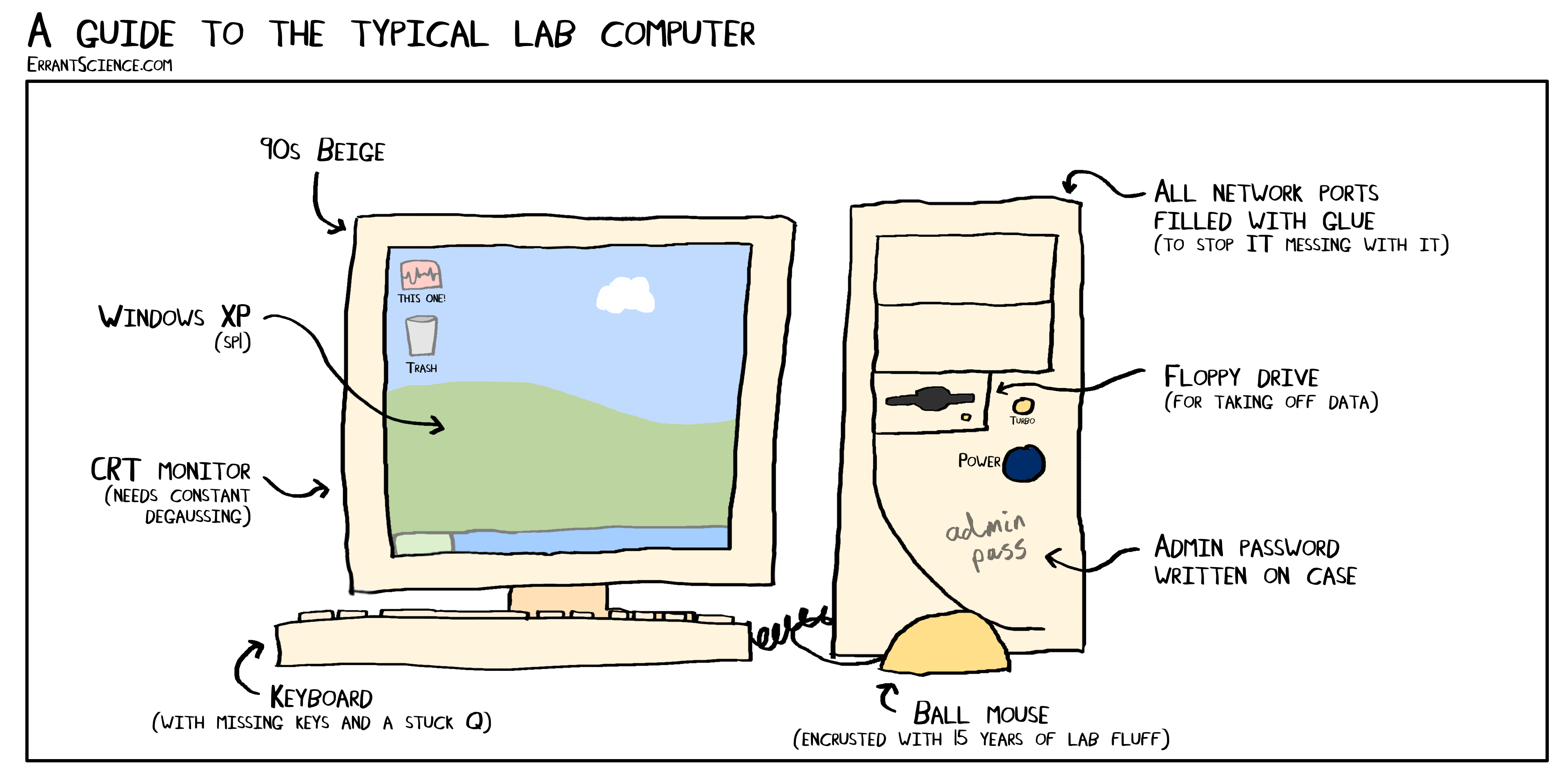 And software is often the least of it. I bought equipment just last year that requires a comm port to connect to the computer. Trying to find off the shelf computers with comm ports is starting to become a genuinely difficult task. Yes there are adaptors but these just add yet another layer of drivers we need to keep updated.

We have control cards for equipment that require slots on the motherboard that were essentially phased out a decade ago. These control cards sell for thousands of pounds and are the only way of talking to and controlling our equipment. We have a very small pool of computers which we know have ISA connectors – I think some of them are made from bakelite and are powered by steam.

Now sometimes companies are supportive of this issue and do provide support. I know of companies continuing software support for 15+ years in order to help customers use their products. Well, I say companies, I mean company singular – I’ve only ever met one.

The rest are supportive in the same way a pickpocket is ‘supporting’ your wallet for you. We’ve been offered the opportunity to sign up for ‘upgrade’ packages which will allow our equipment to run on modern Windows for the low, low fee of half what a new system would cost. We’ve also been offered the opportunity to buy a new conversion dongle, again at a price that is hard to read due to it’s eye watering size.

I can understand why, from a capitalist point of view. Why support old products indefinitely, people bought it as it was and you don’t have some parental obligation to make sure that it runs forever. Also, why keep old products alive when those customers could be buying nice, shiny new products. You are literally cannibalising your own market by keeping old equipment working.

Which leaves us where we are now. With labs stacked to the walls with old equipment running on various flavours of old PCs. Granted malware and ransomware are not going to cause a death because they’ve locked out the 2003 vintage spectrophotometer but it’s also not going to end up with happy labs of researchers. I suppose on the plus side, we are all running such diverse selections of operating systems it’s very unlikely that any virus is going to manage to knock out ALL of them at once. Strength and security by varied obsolescence.

FYI, there are plenty of USB–RS232 converters and (I believe) modern operating systems should have drivers built in; or at least the chips these are based on have been out there since USB 1.1 and don’t seem to be going anywhere.

Specifically, the two most frequent chips used for these controllers are FT232 (with various letters) from FTDI and PL2303 from Prolific. The first uses a protocol standardized by the USB Implementers Forum the same way a USB modem would and should thus be supported out of the box on everything—you’re safe with it as long as USB and asynchronous serial communication both exist. The second is what you’ll find on cheap cables you order from China, as well as many not-so-cheap cables—might need drivers under Windows, but Prolific has been supporting it for a long time.

The only problem is that these usually use either 3.3V or 5V TTL signalling, not the rather particular 12V signalling specified by RS-232 (“COM ports”), so you’ll need to either search some more or get a level shifter. Well, at least that one does not need drivers I guess.