Last year, ErrantScience wrote a post called What to wear to an academic conference. It gives lots of tips about what to expect at your first conference, and what clothes to pack. It’s super helpful. But, unfortunately for us ladies, or indeed for anyone who enjoys wearing things other than trousers, on the whole we generally have a lot more choice when it comes to clothing. This brings a whole new element to the “what on earth should I wear” dilemma, especially to conferences when you simultaneously want to impress, and be relaxed and comfortable.

Society places a greater pressure on women as we are judged more on our appearance. It shouldn’t be this way, but unfortunately, it still is. I think we can also criticise ourselves harshly for how we look and this adds to the already stressful situation of attending your first conference as an academic. We worry that we don’t want to give off the ‘wrong impression’ – being seen as not taking it seriously enough by wearing clothes that are too casual, or being perceived as ‘too girly’ for wearing skirts, vest tops etc. It’s a crap situation, and we shouldn’t have to worry about it – surely we should be judged on the quality of our work rather than the clothes we choose to wear – but it is a stigma that sadly still exists, particularly as there are so few women on the higher rungs of academia. You want to be thought of as a professional, but you also want to be comfortable when you’re away in a strange place surrounded by new people for several days. 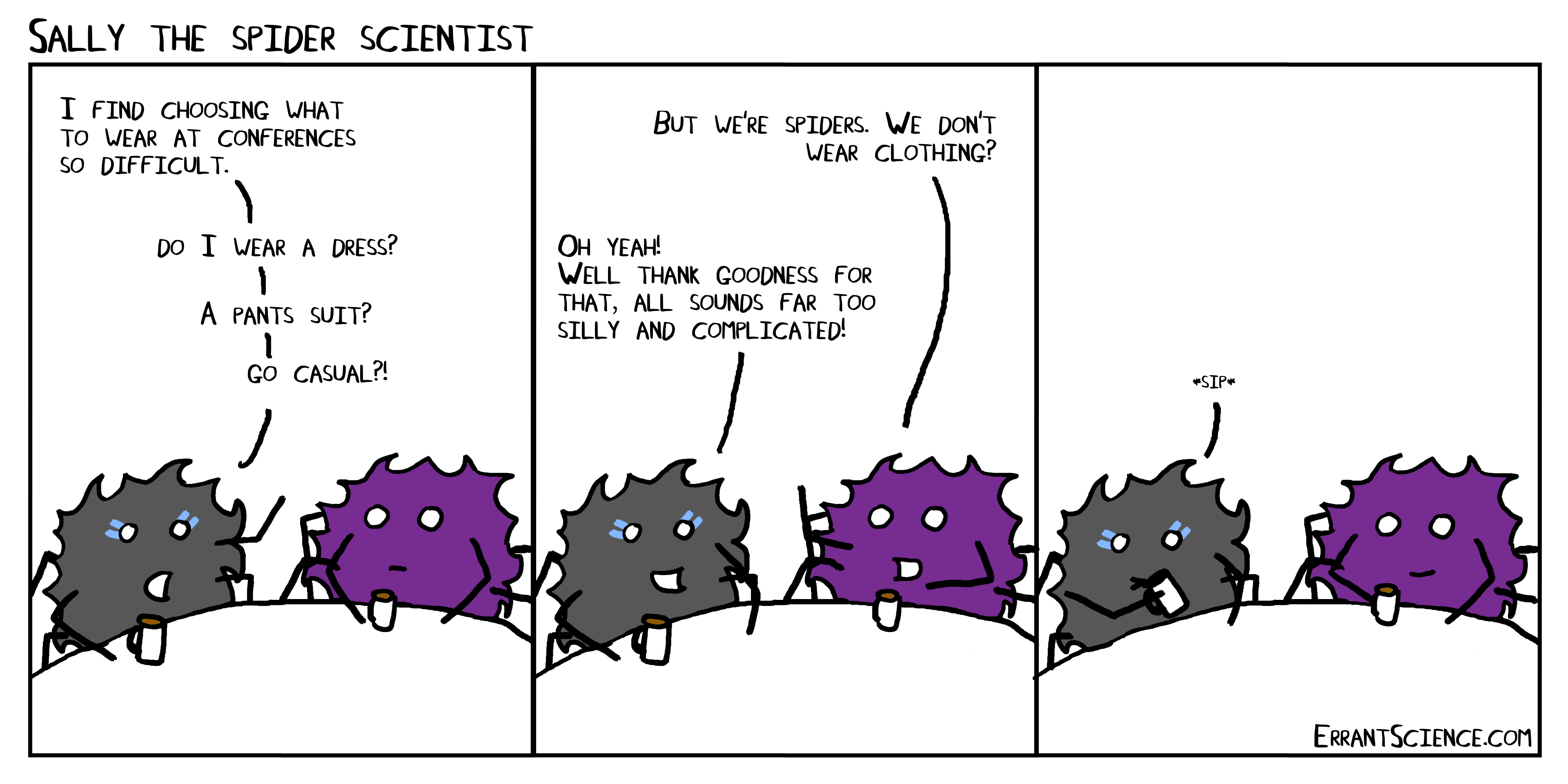 I failed miserably at attempting this combination at my first academic conference. Though admittedly, that was partly due to some frankly poor advice from someone else. I hope, if you’re currently planning what to pack for your first conference, that you use this post as a guide to stop you falling into the same sweaty trap I did at mine.

That’s right: sweaty. Now if you’re being a good academic, you’ll have picked your conference based on the fact that it aligns with your field of expertise. You go, present your stuff, learn about some other stuff a bit like yours, and you go home. (Though along with ErrantScience I highly advocate going to a conference that’s outside your research area.) But if you’re being a clever academic, you’ll manage to pick a conference that fits this criteria, and is also in an awesome location. Which for most people, at least for most British people, means somewhere HOT.

And so it was that as a final year undergrad student I trundled off to my first conference in central Europe in the middle of summer. With the dilemma of what to wear, plus being a female having a substantial choice of clothing, I asked an experienced conference-goer and fellow female what I should wear. I was told it would be “smart-casual”, which for me the easiest option is always dark-coloured jeans, a shirt/blouse, and some trainers or shoes that don’t look too scruffy. Boy, was I wrong.

I arrived fresh-faced and excited to my first day of conferencing. It was over 30°C outside, and felt pretty similar indoors due to many people and terrible air conditioning. I was wearing new, and incidentally quite thick dark jeans, and a shirt. I was warm. Very warm. But, I thought, at least I would be as warm as everyone else would be in their smart-casual gear; we’d all be in it together.

So imagine my horror when, looking around, I saw a multitude of people in shorts. Not those ‘smart’ looking shorts that you can get, oh no. Board shorts. Little denim shorts. And FLIP-FLOPS. The flip-flop lies NOWHERE along the smart-casual spectrum. I had been lied to. And so it was that I spent four sweaty days being miserable and uncomfortable. So much so that I even bunked off conferencing for a day to go hike up a mountain just to visit an ice cave.

Now I’m a bit more savvy about what I can get away with wearing. I take something smarter for the day I present my stuff, and otherwise just wear clothes that I would normally wear, for whatever location I’m in – jeans, shorts, dresses, vests – whatever’s comfortable. Conferences are exhausting; there’s so much information to take in, so many new people to meet, so many socials to attend – the last thing you need is to be wearing scratchy new clothes or inappropriately heavy denim.

So there you have it. For those of us who enjoy wearing clothes other than boring trousers, my one tip for packing clothes for your first conference is simply this: wear whatever you’ll be comfortable in. Because when you’re meeting new people and want to make a good impression, trust me – nobody likes a sweat-drenched handshake.