Field working, the horror of having to do science outside!

I don’t get out much – both socially, and from a research perspective. The first one is mostly due to the ridiculous hours required by the second one. But either way, I spend more time inside basking in the glow of fluorescent tubes (or tubes of fancy, expensive energy saving LEDS) than I do with the strange green stuff on the floor and the big light in the sky you can’t turn off.

Partly this is by choice. I have skin that can burn from the glow of an easy bake oven on the other side of the room. I’m also a lot keener in seeing the development of robots that mimic nature than having to try and insert bits of science in to nature.

But staying indoors is also by necessity as I have typically worked on research that really is best done in carefully controlled lab conditions rather than halfway up a mountain or in an arctic research vessel named “We regret asking people their opinions”.

However, this really just refers to the start of projects. I develop sensors, sensors that, shockingly, sense things – often these things are not things in my lab (a limited market). So at the start of projects I get to enjoy my vitamin D deprived cave of science, but by the end people are starting to cough meaningfully at the door and asking when I might possibly go outside and actually sense the thing that I’ve spent 2 years building a sensor for.

The outside bits I’ve worked in have ranged from hospital clinics to (as of last week) a literal field. None of it has been for very long and mostly covered a day or two at most in one go. This infrequency is probably why I’m quite so bad at it!

Firstly, I don’t have the clothes for it. I follow some excellent field scientists on Twitter and Instagram. They are forever sharing photos of themselves halfway up a waterfall collecting rare moss samples, or in a bird hide outside a student union studying student migration patterns. In all of them they are sensibly dressed with high quality appropriate out of the lab clothes.

I have jeans and t-shirts and a single suit. You’ll be amazed how that combination rarely fits the requirements of field work. So I patch together bits of appropriate clothes and hope for the best. Inevitably this leaves me looking a bit like someone who dressed based on other people’s descriptions of what the outside is like. 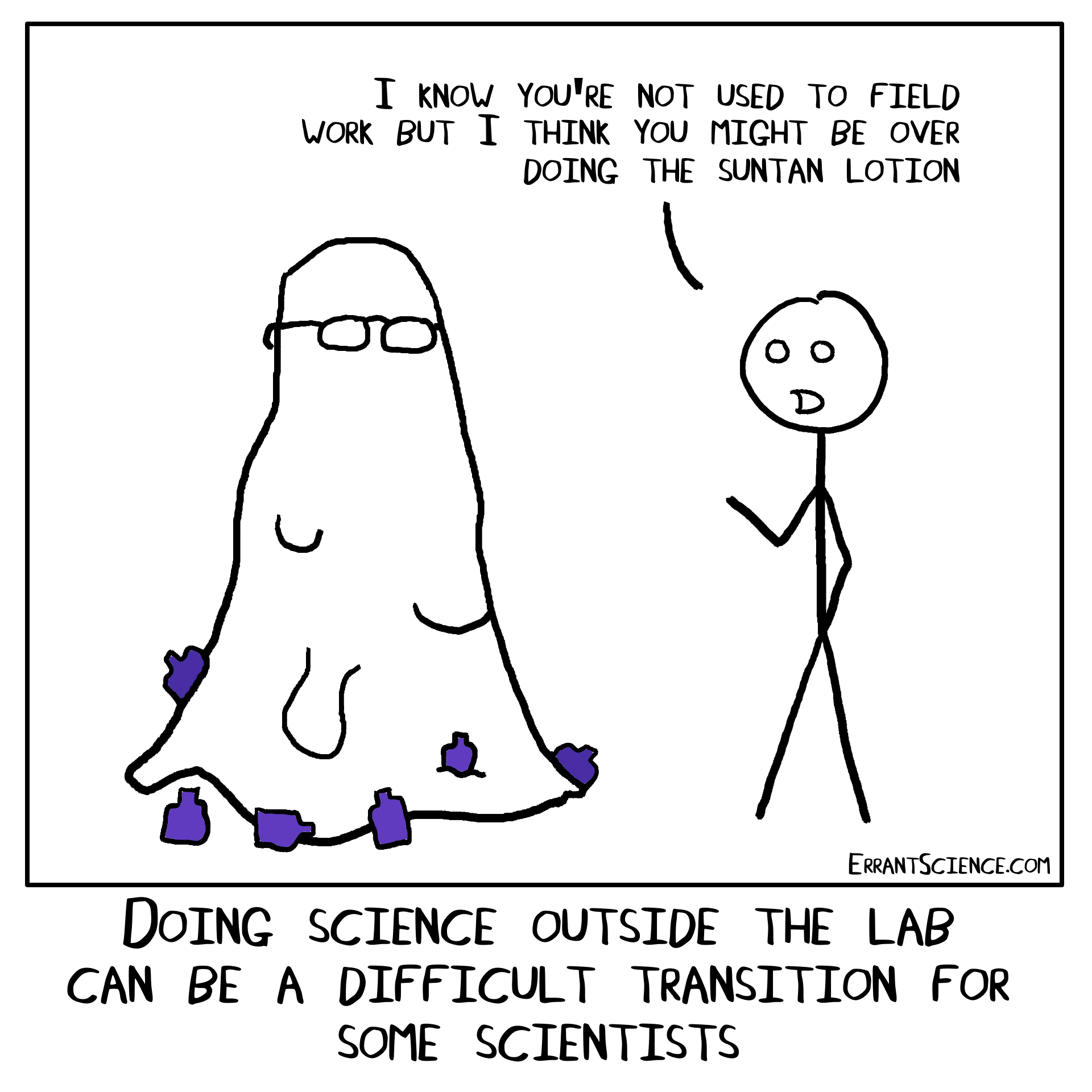 On top of that I also rarely have the research kit for it. The first time I went to do some fieldwork in a town hall I set up the kit with it’s 2m power cable… a good 10m from the nearest power point which was inexplicably a good 3m off the ground. I now never take anything out without a very very long extension cable.

Through much trial and error I’ve also come to realise that the equipment I do have to take is incredibly delicate, the second it leaves the lab. On arrival and setup, inevitably half of the kit will have failed (it will work perfectly when returned to the lab). The rest of the equipment I will quickly discover has a range of flaws making it unsuitable for whatever environment it is in. For example, cooling vents are great… provided you put a thin fabric filter on them to stop bugs crawling in and sacrificing themselves on your power supply.

But despite looking mildly ridiculous in a very stupid ‘field’ hat, constantly asking if we need an extension cable and insisting on bringing 2-3 sets of equipment with me, I think I’m starting to quite enjoy field work. Did you know that outside of the lab there’s ice cream? Discovering that has made it all worth it!