Is Sulfur the “Bad Boy” of the Periodic Table?

Published by Edward Randviir on 25 September 2017

Most of us are well aware of Mendeleev’s version of the periodic table and perhaps no modern day scientist would dare to make an argument against the success in advancing the understanding of chemical research.

It is of course his work that has allowed humankind to predict behaviours of undiscovered elements. Yet like with any organised system there are usually some bad eggs lurking within. For this blog post I am putting a case forward for sulfur being the disruptor in Mendeleev’s creation, by focusing on how much of a pest sulfur has become in the modern world. 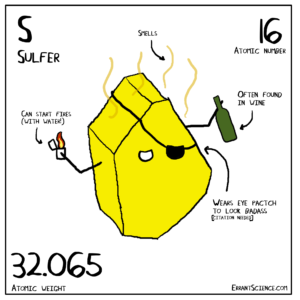 Of course, when one thinks about chemical elements with street cred, arsenic, lead, cadmium and osmium are all candidates for their poisonous or explosive features. But while arsenic poisons, lead and cadmium turn you loopy, and osmium can blow your hand off, sulfur, in its own unique way, can do all of what those elements can do and much, much more (well apart from blow your hand off).

It is possibly for this reason that sulfur is a chemical element often scorned upon throughout the history books. Consider biblical passages such as Genesis 19: Sodom and Gomorrah were testified to be cities burned to the ground when “fire and brimstone” rained upon them, brimstone being the archaic name for sulfur. Indeed, “fire and brimstone” is a turn of phrase often used to describe the wrath or fury of an individual or organisation, which in modern day parlance would literally translate to “fire and sulfur”.

Before I continue though, it is important to understand that sulfur does have a good side!

Situated in group 16, period 3 and with atomic number 32, sulfur is actually an essential element in many life processes. It is a building block of essential amino acids such as methionine, which is responsible for triggering protein generation in our bodies through genetic coding. It is also incorporated into cofactors within our bodies that allow various metabolic processes to function. It also has commercial uses – various sulphites are common food preservatives and cleaning compounds in industrial processes, while some metal sulfates are used as supplements for humans, animals, and plants. So why would I even question whether it is the “bad boy” of the periodic table and leave Mendeleev turning in his grave?

The advancement of humankind has often uncovered new issues in all aspects of our lives. Higher populations lead to a higher level of wastes and emissions, many that contain sulphurous compounds that have impacts upon human health, the infrastructure we build, and the air that we breathe. Consider the wastewater industry, for example. The wastes we eject to sewage contain a variety of odour compounds: hydrogen sulphide (H2S) and sulphur dioxide (SO2) are two of the most common species that exist and both are simple molecules that wreak havoc inside our sewers. Aside from the occupational risks of H2S, which can kill humans in concentrations as little as 500 molecules per million “air molecules”, an unintended consequence of H2S is its ability to promote bacterial colonies within pipework that corrode pipework to nothing. The chemistry behind this is complex but it often involves formation of sulfuric acid, a well-known acid that dehydrates sugar, burns skin and even dissolves iron. Corrosion of this type is quoted in some work to cost as much as $1.4 billion per annum, which is a heavy bill for such repugnant and antisocial chemical behaviour!

Sulfur also has a habit of making efforts to tear down anything that humankind constructs. Often when visiting statues within inner cities one will observe that fine detail in statues has eroded away over a period of time; thanks in part to the existence of sulfur. While the chemistry of acid rain is not one particular process, the formation of sulfuric acid in the upper atmosphere is a contributory part of acid rain. With the weather in the UK being about as certain as death or taxation, acid rain becomes quite a problem for those of us having to put up with the aqueous nature of the British summer. York Minster and Westminster Abbey in the UK are examples of structures that are prone to acid attack, so much so that the former was coated in fat in 2013 to help prevent it from happening. I argue that sulfur is to blame for being a chemical miscreant, having the temerity to interact with water in our atmosphere to generate strong acids that leach our pretty historical architecture.

There are allergies and sensitivities that exist due to sulphites. For the observant person who indulges in a glass of wine, one will often see a health warning on the label stating that the wine contains sulfites. These sulfurous chemicals are used to preserve the wine; without them grape juice would quickly turn into vinegar.

Now seriously, wants a foul tasting drink that doesn’t make them merry? However, sulfites can be dangerous to persons with sensitivities to certain things. Asthmatics and hayfever sufferers are particular groups of people that may be at elevated risk of becoming unwell from sulfites according to the Australasian Society of Clinical Immunology and Allergy. It can also cause certain individuals to experience uncomfortable rashes on the skin confirming sulfur’s status as an irritant at best, and an intoxicant at worst. 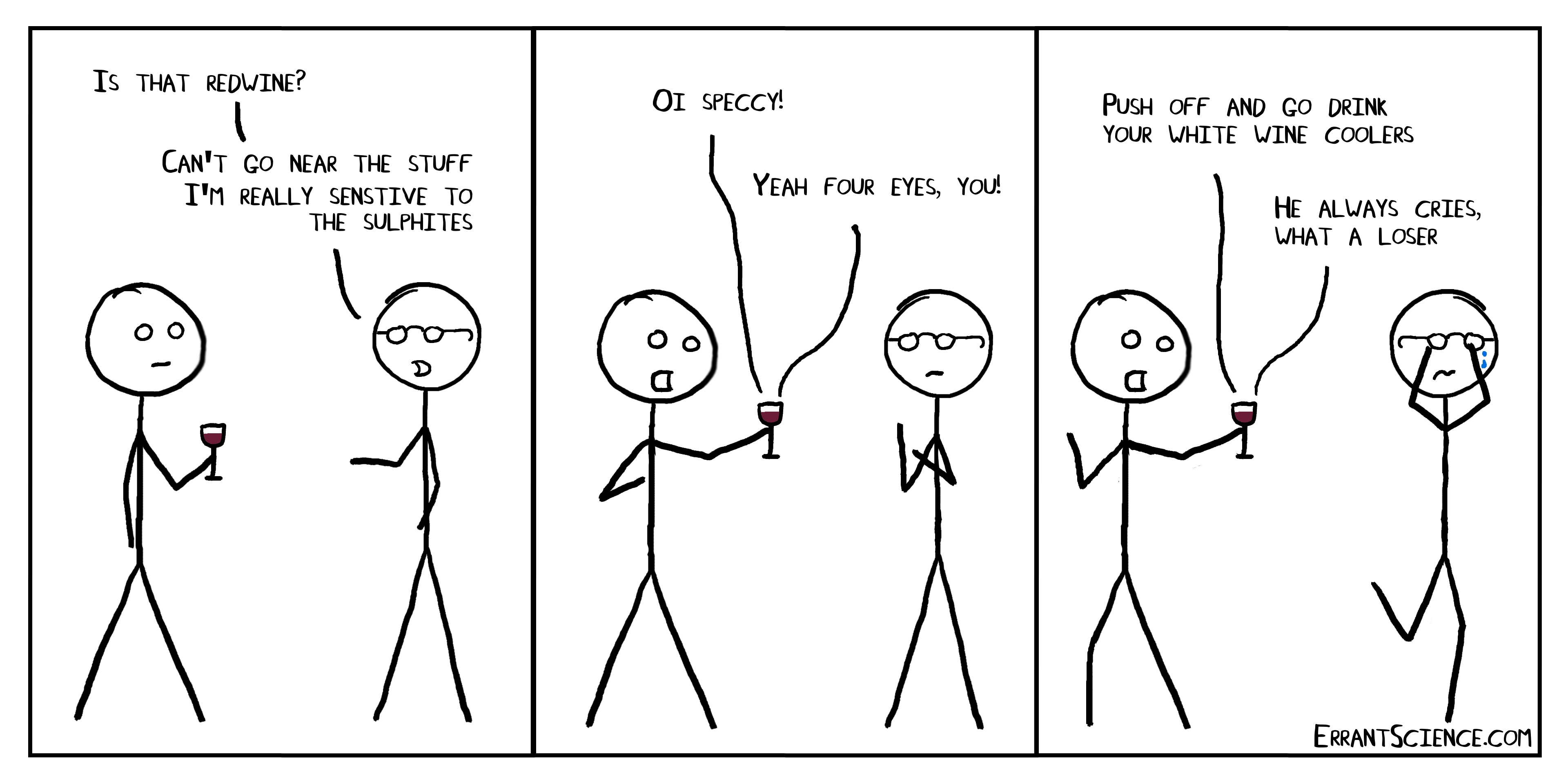 Then of course we all know about the hazardous nature of sulfuric acid, which can burn our eyes and skin, it can invade our respiratory tract, and reacts with practically anything that exists other than PTFE (think Breaking Bad, kinda). Sulfuric acid is a common lab chemical, but has to be handled in very small amounts and in a very responsible way, for this form of sulfur is one of the most aggressive that there is. A 10% solution of sulfuric acid is about 1 million times more acidic than water, just to provide a bit of context on how dangerous it can be. The resultant molecule when sulfuric acid reacts with water, sulfate, can cause upset stomachs if it appears in drinking water and has to be monitored, too. You may find yourself asking why would sulfate appear in drinking water; well sulfur cycling occurs underground and sulfuric acid is a product of sulfur cycling! The acid leaches minerals into the surface water and pools itself within reservoirs. I won’t detail other sulfur species, such as bisulfide that attacks the skin; suffice to say that the list of sulfur’s rogue character could be continued (and we haven’t even got to stink bombs or volcanic odour).

So we have seen then, that sulfur is a fundamental part of chemical tomfoolery. Whether that be invasion of nostrils, to starting fires, destroying our history or dismantling our infrastructure, sulfur does the lot. It is the naughty child of the periodic table that often needs to sit on the naughty step. The mitigation procedures for the effects of sulfur chemistry are vast and expensive: corrosion resistant coatings in pipework help to delay inevitable corrosion issues in pipeworks, for example. Complex physical and chemical processes remove sulfates from water destined for our taps, and ongoing repair work is seen on cathedrals, statues and other large monuments that preserve our history. Sulfur offends us, it destroys us, but it also gives us life.

Humankind is continually at the mercy of sulfur, while concurrently enduring the destructive nature of many of its compounds. Sulfur is essential to life, but even essential things in life can cause problems in excess. Sulfur’s problem is that it doesn’t take much excess to kick up a fuss!