Tips for playing music in the lab

Shakespeare wrote that “If music be the food of love, then play on”. Clearly he was wrong, everyone knows that pizza is the food of love. If Shakespeare had been more science minded then he would have seen that music is the ‘snack of science’, it’s not required but it sure does make those hours at the bench go better, especially if it’s chocolate music.

Labs all across the world have various tones of music echoing around the petri dishes keeping researchers happy and motivated. Listening to music in the lab is by no means universal but it is certainly more loved than hated and as one of those people that love it I wanted to share my tips and suggestions for ensuring a happy tuneful lab. 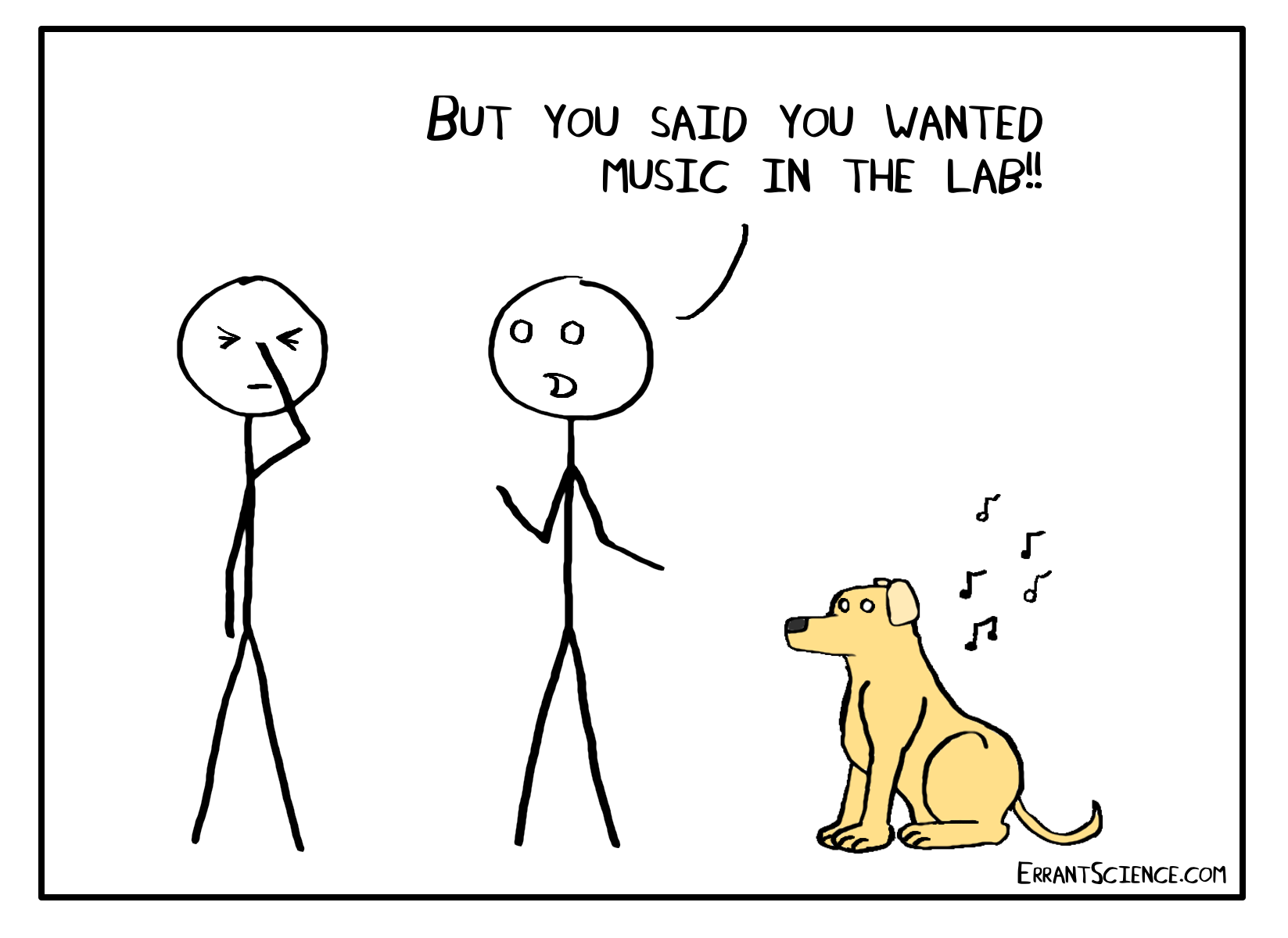 Now playing music in a lab is contentious not between those that like it and those that don’t (you can just buy them ear plugs), but in fact between the vast array of differing options about what to have on. Only mythically lucky researchers have their own labs, most of us have to share with other people and their own diverse range of terrible music tastes.

You may think that headphones would solve this problem. But headphones tend to limit the ability of researchers to hear when you shout “Hey watch out for that giant fireball!” so headphone wearing researchers tend not to last long.

So like it or not you need to come to some kind of accord with your lab mates in selecting something you can all listen to. As this is a negotiation I suggest that anything better than “claw your own ears off” should be considered a win.

Talk radio is always popular but very dependant on who’s talking. In the UK, Radio 4 is excellent but come the afternoon you really need to like a lot of 1800s drama about unrequited love.

With all talk radio you’ll get some time devoted to covering the news and politics. Politics is the very last thing you want being discussed in the lab, nothing sours a lab atmosphere quicker than finding out one of you voted for whichever party is evil at the moment. So talk radio is worth avoiding in case of accidentally inspiring debate and discussion.

More upbeat toe tapping music is always nice and there’s plenty of inoffensive rock out there to keep everyone happy. The trick here is to keep away from the heavier metal and rock because head banging can lead to some expensive glassware losses. On a similar note I’d avoid classical music because air-conducting is almost unavoidable and pipette racks are bound to go flying!

But once you’ve finally decided on the kind of music (and possible a schedule so complicated that it makes Dr Who continuity look positively linear) you next need to agree on a music producing box.

A good lab speaker system needs to have two important properties. Firstly it has to be essentially disposable. Labs are exciting places, more so if you have students, and things like radios tend to come to either damp or fiery ends. Some lab radios have lasted decades in their high risk environments, you can’t buy that kind of radio but from time to time you might get lucky enough for a ‘science resistant’ radio to evolve naturally due to chemical exposure.

It also needs giant buttons, well I say buttons because the first thing you should do is remove ALL buttons except the power button. This avoids the thorny issue of volume.

But once you’ve finally decided on a music selection that everyone can agree with, playing on a device that is both lab friendly and semi-disposable, then you can realise that you’ve wasted hours on this and your project is now behind. You should reopen the music selection debate and see if everyone doesn’t mind putting on some motivational music instead.

Hey, I love to listen to blues on during my work at the lab. What is your favorite genre to listen on the lab?