Anyone can work in science

One of the hard things about writing articles as opposed to face to face discussion is that they are a little one sided. No matter how hard I strain I can’t hear my readers. No matter how loudly you all shout at your screen in frustration at my opinions.

This means that I often opine in these articles with very little feedback save for the odd comment here and there, the majority of which are seemingly very keen on me buying Nike shoes or fake Rolexes.

That is except when I talk about diversity science. 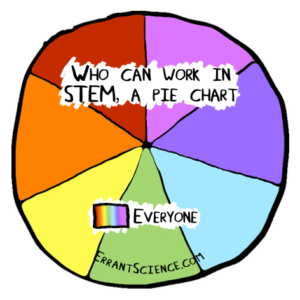 I’ve written about this a bit before but here I’m referring mostly to my rainbow pie chart cartoon and the magical power it has for making people write to me and tell me how not everyone can do science.

Mostly my approach is to roll my eyes and ignore these people because 90% of the time I’m busy and don’t especially want to get into a 50 tweet argument about it.

But thanks to the drip drip of comments (both on social media and on several occasions to my face) I feel like it’s time to sit everyone down and have a very serious grown up conversation about how everyone can do science.

The comments I get generally fit a pretty similar range of topics which all really need covering separately. But rather than do it by topic I’ve chosen some of the very ‘best’ comments to use as discussion points. Although just to be clear by discussion I mean ‘me having a bit of a rant about them’.

“Does “anyone” include people that cry every time her experiment fails?”

Fun fact: I’ve cried after my experiments have failed. I have to admit it’s not a common thing but there have been days when life, the universe and whatever approach I’m taking conspire to kick me when I’m down and my experiments have ended with me having to wipe my face with a powder free cleanroom grade tissue.

All of this is because I am (like all other scientists), and I am surprised that I have to say this, a human being.

I always strive to approach my experiments with scientific rigour and analyse my data with as cool a head as possible. But I’m fallible and prone to emotions just like everyone else inside and outside of science. No job position in science that I’ve ever seen has had the requirement “be an emotionless husk”. If there was, it’s a position no one outside of the ‘society of psychopath scientists’ would take.

Being a good scientist is about acknowledging that you have emotions and striving to always look at things as objectively as possible. Not pretending you have all the emotional depth of a dead tree stump.

“What about [insert group here], they can’t be scientist”

I am a white 30 something man that lives in the UK. I am about as qualified to talk about the struggles of minority groups in science as a Jack Russell is qualified to lead a lecture on the social political history of Kosovo.

In general everyone that has taken the time to tell me about all the various groups that can’t do science tends to form a very simple formula. They talk about one group of diverse people, apply a single stereotype, extrapolate to science, and claim this demonstrates why everyone in that group can’t do science.

In science terms the best way to describe this is taking a data set with points scattered all over a graph, drawing a line through all the points to form a sad face, then pointing at the graph and saying “see the data is sad, stop running that experiment and collecting data because it’s sad”.

And just to make it even worse this kind of gatekeeping is brilliantly self-fulfilling. If you assume that a group can’t do science because they are in a group, then don’t let them learn or try science, you’ll end up with very few of them doing science.

Again to break this down into scientific terms this is like telling a student that their experiment will explode and then purposefully throwing a match at it. To get the full effect you then need to log into a forum full of other people who think student experiments always explode and tell everyone about your amazing evidence and spend several hours with a smug sense of how right you’ve made yourself feel.

Unfortunately for you everyone not on that forum will just think you’re a complete moron. 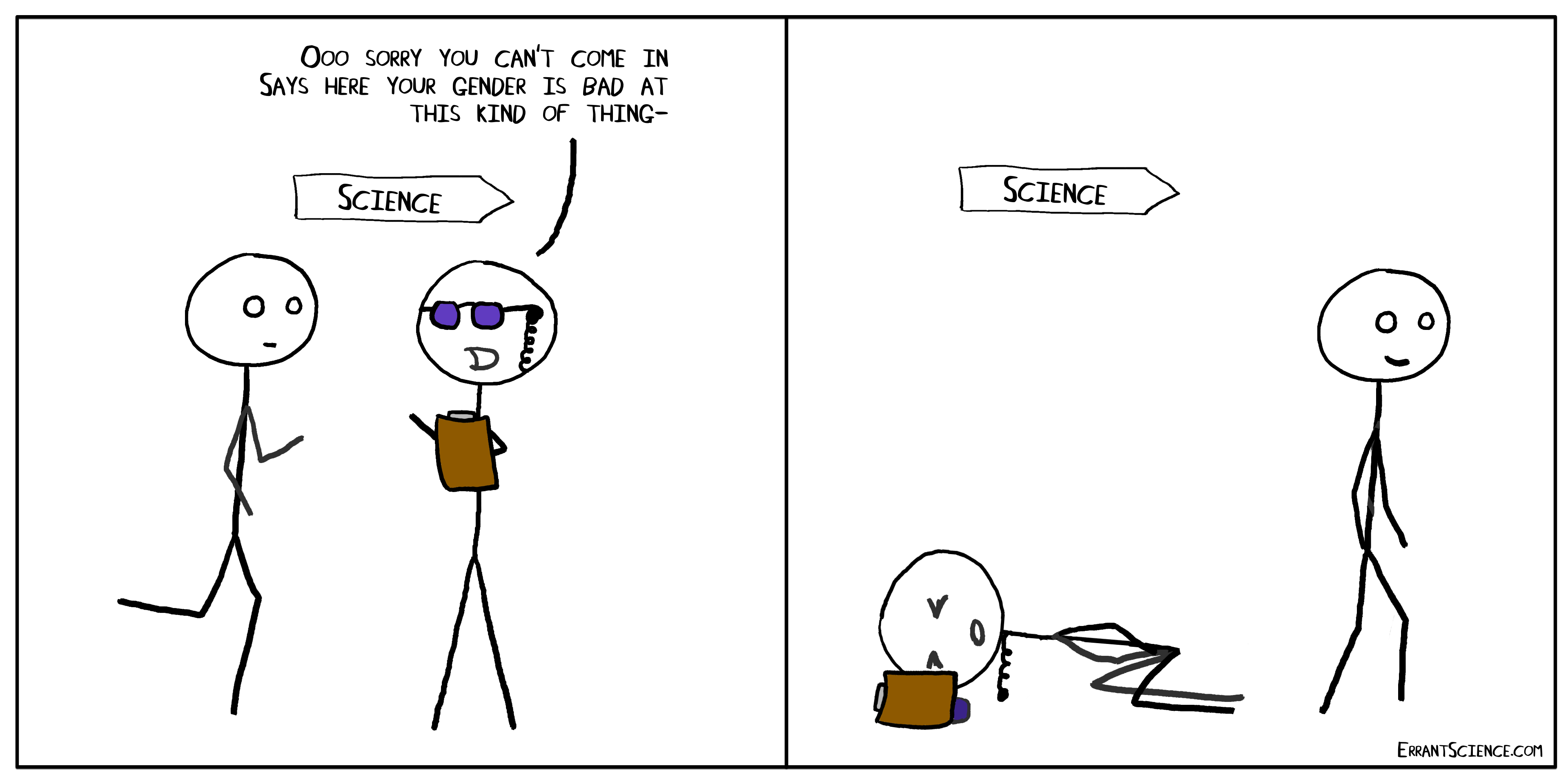 “What about stupid people?”

When I was 16 I got a C or higher in just five of my GCSEs and I failed my English GCSE, twice.

When I was 18 I got three Ds in A-Level Chemistry, Physics, and Biology.

At university I got a 3rd degree.

I’m not cherry picking – that was literally all of my qualifications from the age of 16 to 29. Five crap GCSEs, three terrible A-levels and a degree level that is best described as “handed in the correct paperwork”.

Now not to self-deprecate too much but those are not the qualifications of a genius.

At every stage there were plenty of people who suggested that I’m pretty stupid. To be honest it’s amazing I was even allowed back into education after each terrible set of exams. At some point surely should someone have stopped me doing science because I was too stupid? I mean, clearly with results like these I would have been wasting my time trying to pursue a career in science.

To be honest I blame my teachers and parents for not stepping in and explaining to me that that I wasn’t smart enough to work in science. It would have saved me 15 years of wasted time writing papers, filing patents, getting a PhD, supervising several students to their own PhDs and all the innumerable other things that I’ve done but I clearly wouldn’t have done, what with being stupid and having bad grades.

I don’t think many people would claim to have invented a perfect way of assessing kids. There are a million jobs in science at different levels for people with different skills and talents. The only stupid people that shouldn’t do science are the people that look down their noses at people who don’t have the same “smart” skill set as them.

“What about people who are bad at science?”

Fun fact: if you think you or someone else is bad at science then you don’t know science very well. First off, what’s being good at science? Heck I’m a ‘scientist’ and even I struggle to actually define what is a generic ‘science’ job.

If science was one job what would it be? Bear in mind that it has to encompass professors at desks, technicians working in labs, QA specialists in biochemistry companies, soil researchers digging pits, fresh undergrads washing glassware, and a million more jobs. All of whom I think have a fair crack at referring to themselves as scientists but none of which actually share a great deal in common.

One thing they certainly don’t have in common is the application of their knowledge. I’ve worked in a physics department long enough to know that they know about as much about biology as they know about the proper way to get Jack Russell urine out of trousers. And likewise as a biochemist I know as much about quantum physics as is contained in the Amazon summary of A Brief History of Time.

If push came to shove I think the closest I’d get to is that maybe ‘science’ is an appreciation of discovery and the scientific method. But I’ve worked in science long enough to know that neither of these are actually universal and nor are they required for a lot of science jobs.

So given the last 4 paragraphs, how exactly are we to judge who’s bad at it?

I mean they may be bad at a job which requires advanced chemistry but that doesn’t mean they can’t do another science based job. Nor does it mean they can never work in chemistry, just not THAT chemistry job. In much the same way as I can work in book publishing but probably can’t lecture at Oxford on the literary implications of using small dog based metaphors.

“What if you don’t want to work in science? Stop making everyone into science nerds.”

I really wish this wasn’t one of the comments I regularly get, but here we are. The others require slightly longer to craft answers, but this one simply needs the use of bold font.

Anyone can work in science.

Please don’t think all of this ranting is leading to the conclusion that everyone has to be a scientist. They really don’t. Science is but one of the many many many things you can do with your life and while I am always trying to help educate people about science because I think it is important to understand the world better no matter who you are, I don’t think science is the ultimate career for everyone. 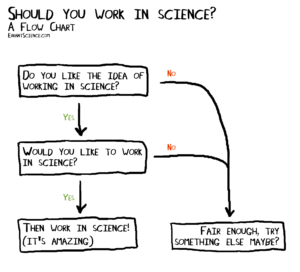 Nor do I think that art is the ultimate career even though I spend no small amount of time telling people how much I enjoy drawing cartoons and they should try it too.

The message I am giving is simple. Anyone can do science. For some people it’s easy to do science, the entry requirements are low and they can walk into the fun world of papers and pipettes. For others, there are all of the above negative barriers holding them back from working in science and as I hope I’ve set out they are, for the most part, total bollocks.

Anyone can work in science, and anyone that wants to should be able to work in science. Maybe if everyone spent less time finding reasons to pretend to be a grossly unqualified gatekeeper to science then maybe we’d have a lot more amazing scientists.

I was “bad a science”. I didn’t get the PhD position I was promised when I started my Master’s thesis, because my PI realised that I’m doing what I’m told in the lab, but don’t creatively think of what to do next or in addition.
So instead, I switched to Sales & Marketing, which I was really bad at, and I was told so, too, at some point. Luckily I can’t remember much about that conversation… Anyway, I didn’t like it, but I taught myself how to use twitter and other social media for that job, and I started learning to code (mostly out of boredom). That was great, because it helped me back into science. I’m now a bioinformatics postdoc and I can get quite creative with the code I write. 😉