Gift ideas for the research scientist in your life

I am terrible at gifts. I realise this is a strange way to start an article titled “Gift ideas…” but I wanted to be honest. In the many years of being asked “What do you want for Christmas” there has never not been a year where I haven’t frozen like a cryogenically frozen rabbit dropped off the back of a truck and into the path of a car with the world’s brightest headlights.

BUT this year is different. This year I’ve spent some time carefully considering things that as a researcher are awesome to get and make life in research that little bit better. So in no particular order, here is a range of things I think might be great for the researcher in your life.

Okay, starting off, this is on the cheaper end of the spectrum, but if you really search for the premium brands a roll will set you back about £7.

Gaffer tape is amazing. It holds together entire industries and has saved countless careers by very quickly fixing something long enough to not explode until the boss is gone. But its amazing world fixing powers are always in high demand and a roll of lab gaffer tape is a highly sought after item around the lab.

By giving the research scientist in your life their own roll of gaffer tape you mean that they will also have their own secret stash of problem solving magic tape. No having to hunt around while their experiment creaks and groans threateningly, no more arguing with co-workers!

Besides, you can buy sparkly rainbow glitter gaffer tape which makes it seem MUCH more fancy!

When working in the lab many researchers spent almost all their time wearing gloves and doing things that very much should not be shared with the world. In a good lab gloves should be worn at all times to stop you accidentally poising yourself or contaminating something with your humanness. But as anyone can attest to, gloves are also to stop you contaminating things with your chemistryness. So while in the lab you absolutely shouldn’t be flicking through a blog post on your phone… *cough*.

But technology has this solved! While expensive at around £50, little voice control speakers from Google and Amazon are basically the best thing to ever have in a lab. You can ask them for molecular weights, you can ask them to do little calculations you can even ask them to set alarms. There’s even a number of open source mods you can do to make them log data and run experiments!

All controlled with simple voice commands.

For £50 you get to essential have the computer from StarTrek in your lab. Or if the researcher is more fantasy minded, their very own Igor. 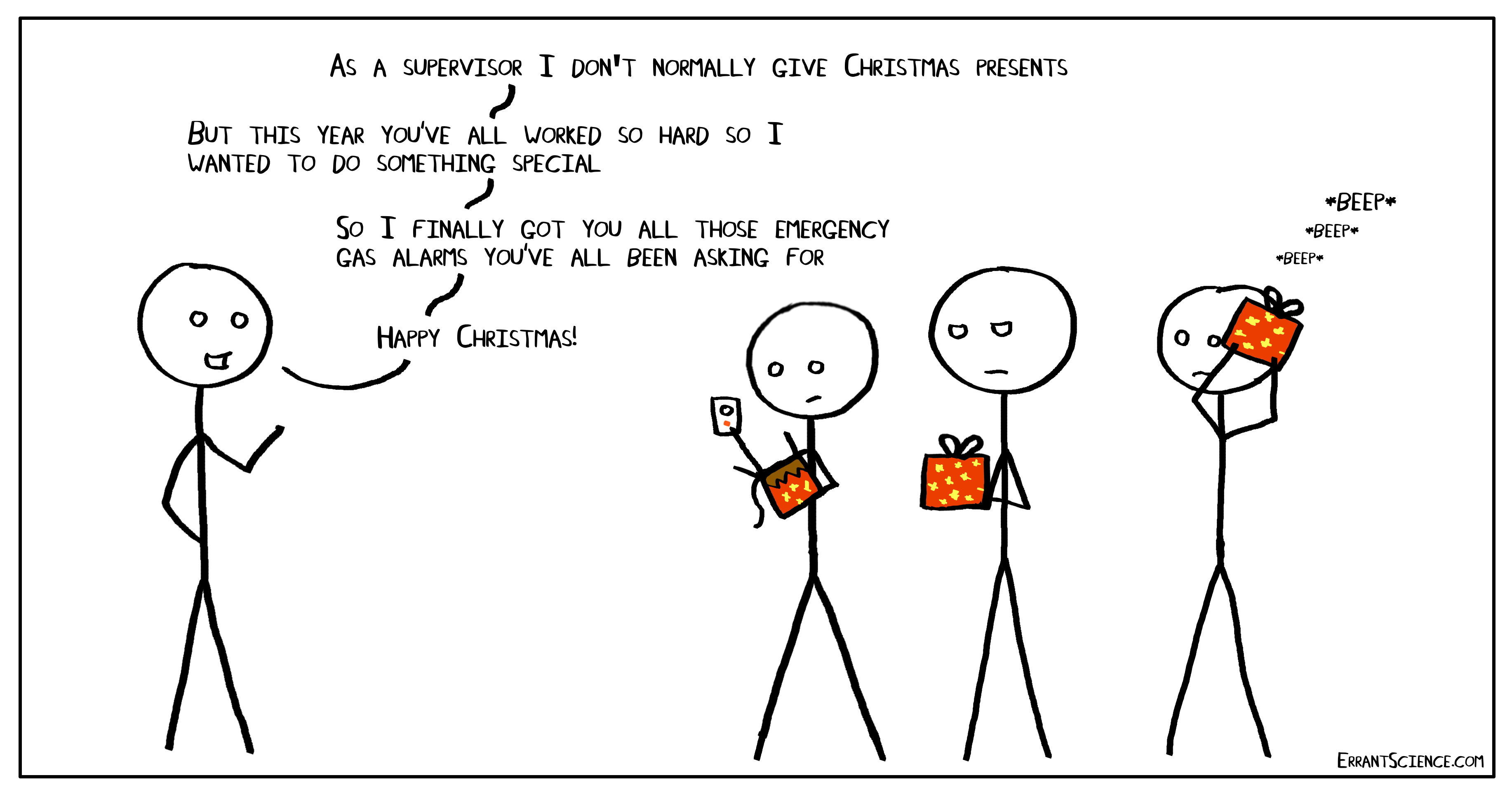 I love working in labs. I love long complicated experiments that build up huge existing datasets. Datasets that are exciting once they are finished but dull as a dull dull thing while you’re actually running them. Every flavour of research has it’s dull repetitive work, be it experiments, data entry or just putting literature together.

This sort of work is made so much better with music, a good TV show or even some audio books! I ran a whole bunch of my PhD experiments while watching my way through 30 Rock, it was the only way to stay focused while running the exact same 6 hour isotherm for the 5th time.

Luckily you can help with this by buying an all you can listen, watch, hear subscription to some form of media service. A Spotify, Netflix or Audacity subscription is normally about £5 a month and even a couple of months is a couple of blissful months of entertained research.

Think of it as buying the researcher in your life a little slice of sanity for a few months.

Edit: I take this back you can get some which are tons of fun and do little things for ~£500.

If you are okay with spending £1000 on the researcher in your life then please post your name below as literally every researcher reading this article will want to get to know you and find out what they can do to get on your Christmas list.

3D printers are AMAZING. I’ve now written articles to that effect like 3 times, including for a few magazines. As time goes on and the technology gets better this just becomes more and more true. If you think there is an area of research that wouldn’t benefit from 3D printing then you are not being creative enough, as 3D printers are amazing everywhere!… I might have a bit of a thing for 3D printing.

Buying the researcher in your life a 3D printer is like buying them their very own lab technician.

If getting them a voice control speaker is getting them the computer on StarTrek, then this is buying them a replicator. For the more fantasy based people I guess it’s like getting some gnomes in a box that build stuff?

Technology is amazing. Electronic notebooks, voice controlled lab assistants and RFID tagged equipment have revolutionised labs for research. However, no amount of technology has solved the problem of “hey that’s mine!”.

This problem is rife in research as researchers generate a LOT of random bits of stuff in the way of vials, baggies and strange boxes. All of which is owned by someone and is either some critical component or carefully hoarded things that might be critical one day in the future.

Thankfully you don’t need clever technology to solve this problem for the researcher in your life, you just need a sharpie… or LOTS of sharpies.

Sharpies write on practically everything and are a great way to make sure that everything that is owned by your researcher is correctly labelled as theirs and protected from other evil researchers. If you buy them a big bumper pack of them in different colours then you also give the researchers in your life the opportunity to start organising stuff with colour coding!!

Think of how highly organised their lab would be with colour coded labelling everything. I mean, they’re never going to actually do it or stick to it for more than a month, but the idea of it is something worth giving.

Hugs cost nothing and…

Everyone has bad days in the lab and everyone needs hugs sometimes. And some days a hug is worth more than fancy speakers, replicators or glittery gaffer tape. So if you don’t by the researcher in your life anything this Christmas be sure to offer a hug when they need it.