Every year I like to have a bit of a public update on where ErrantScience is and what we’re up to. This never really fits anywhere midyear so I tend to make it the first blog post of the new year as sort of a list of resolutions and aims for us for the year.

Also, January is a total ghost town on the internet so I can post it safe in the knowledge that the only people reading it are probably the really committed ErrantScience fans. So given who you (the reader) are – thanks! You are the people that basically keep this site running.

When I get asked “How do you keep writing blog posts every week!?” the best answer I have is that for reasons I don’t completely understand a decent number of you keep coming back to read them!! Honestly, it’s what makes me keep clicking the button labelled “New Post”.

But this year there has been a hell of a lot more going on than just the regular ~40,000 words of ErrantScience posts and here’s where I tell you all about it!

The launch of Clutter!

In early 2017 Michelle (@MichelleAReeve) joined ErrantScience and, as you might already know, now runs ErrantScience: Clutter. Clutter was dreamed up to solve a very specific problem on ErrantScience: I am one person with one set of views. I could be the best writer in the world but I come at science and research with my own biases and baggage. With Clutter I wanted to try and provide the same kind of content but not from me! 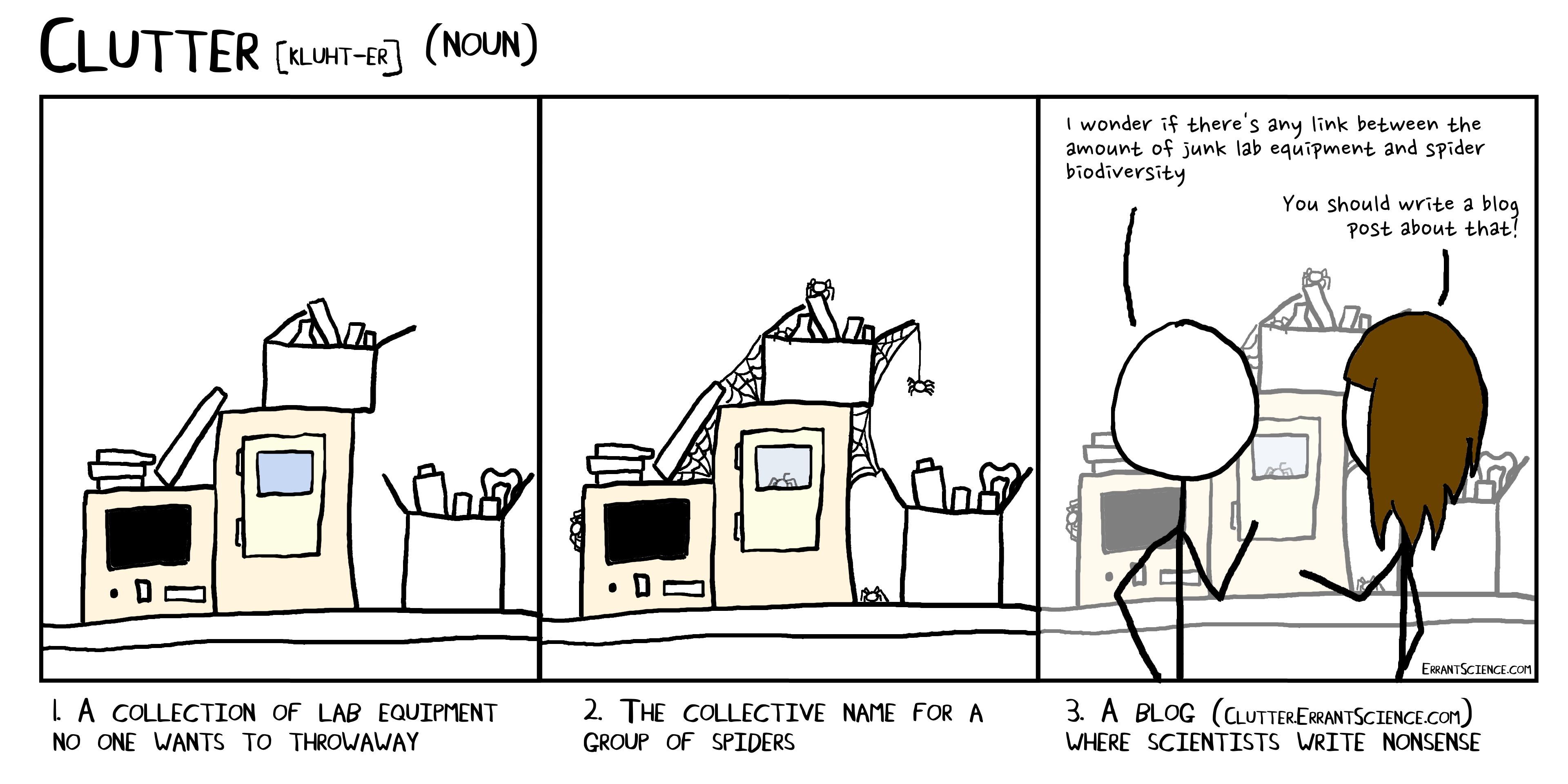 So between myself and Michelle we dreamed up Clutter. A regular blog space for Michelle to write from her own point of view AND to include more guest articles from a wide range of other scientists (and non scientists working in science).

When I pitched the idea of Clutter to Michelle I was very open about the fact that it might fall on its arse. Launching blogs is hard as people have lots of things to read on the internet and I was very wary that introducing more would essentially ‘wear out’ the audience and no one would be interested.

To some extent in the first month of Clutter this fear was born out when a friend admitted that they didn’t really read Clutter because it was “too much stuff”. I can’t tell you how close I was to cancelling the whole project.

But I hadn’t counted on two things. Firstly that Michelle is amazing and secondly that Michelle is annoyingly good. I realise that sounds like the same point twice, but this book I got on lazy writing techniques for Christmas said it would sound good.

All year Michelle, who previously wrote a very sporadic blog, wrote frequent, interesting and deeply personal blog content about the end of her PhD. Many of the articles are some of the most honest insights into the pain and difficulties in the post viva PhD phase I’ve read.

Secondly, Michelle managed to persuade 10 amazing people to come write articles to go up on Clutter. And not just any old rubbish, high quality insightful articles from people and perspectives that neither of us could possibly cover. Which is the entire point of Clutter. Moreover, she persuaded them all to do it for just the love of blogging! (more on that later)

The main site has been doing great. Views are still growing happily and I’m starting to find a nice groove with the content I put out. I’ve not had as much time in the last 3 months to write the articles as I had earlier in the year which worried me a lot. But I have had more cartoon time so I’ve been secretly upping the number of cartoons to try and compensate. There have been no complaints.

One big change that has happened on the main site is that the long time proofreader of ErrantScience Helen (@giants_orbit) has had to step down from proofreading my typo ridden nonsense. She’s been amazing at fighting back the mess that is my writing for years but is currently busy battling severe depression – with a big stick!! 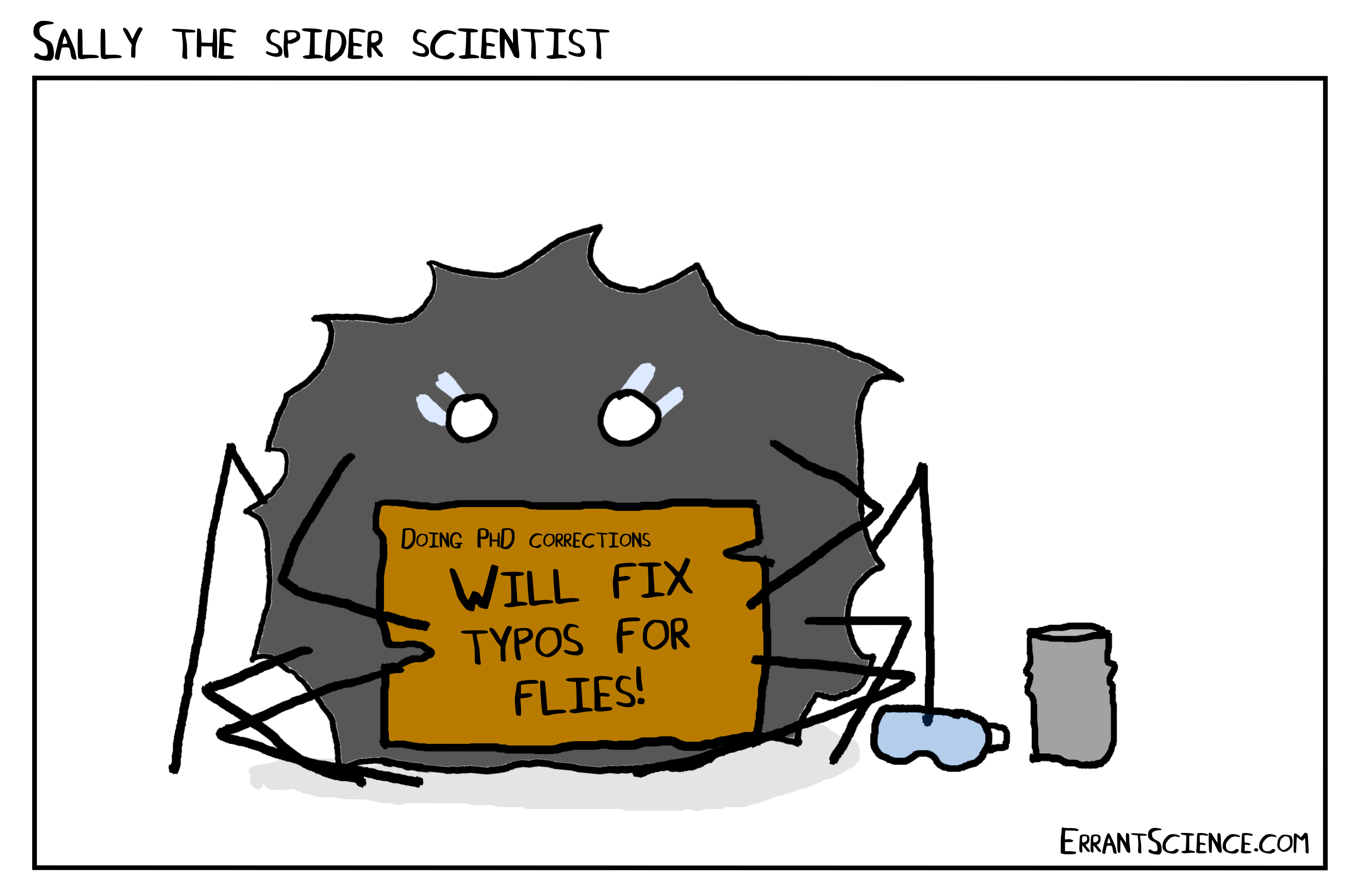 Luckily for you Michelle managed to step in and take over initially and now the amazing and wonderful Sarah (@LilithElina) has very very kindly started proofreading as well. I asked Sarah because over the last year she has, unsolicited, been secretly ‘fixing’ ErrantScience articles after they went up as my typos made her eye twitch. The world needs more champions of proper writing like Sarah!

So in addition to the blog, ErrantScience has started to spread its tentacles elsewhere into the real world.

First off, I have been hired as a cartoonist on several projects in 2017 and have another 3 events already booked for 2018, including a week-long conference and a journal cover! I’ve also scoped out several projects where I’m listed as “the cartoonist” for which we are now applying for funding. Who would have guessed that drawing silly cartoons of things would actually be something people wanted!

Secondly, Michelle has been great in getting ErrantScience to more live events. So far these have been focused more on what I would call training for scientists in how to draw cartoons or write blogs. These have been an absolute BLAST and I am dying to do more and all the feedback has been crazy positive.

Lastly, there are books! These books only exist on Michelle’s computer in an InDesign file but very soon they will exist as real physical things that you can buy!

All three of these things have been so much fun to do, and often something that we didn’t set out to do because we thought it was going to be good/money making but because someone said “Hey, why aren’t you doing this thing, DO THIS THING” (that is almost a direct quote from Dr Jess Wade).

First off the main thing I want to do is keep doing it all! Because of things in the rest of my life 2017 was like trying to run a blog on hard mode while a pack of angry ferrets attacked my ankles and a small child repeatedly kicks me in the shin. 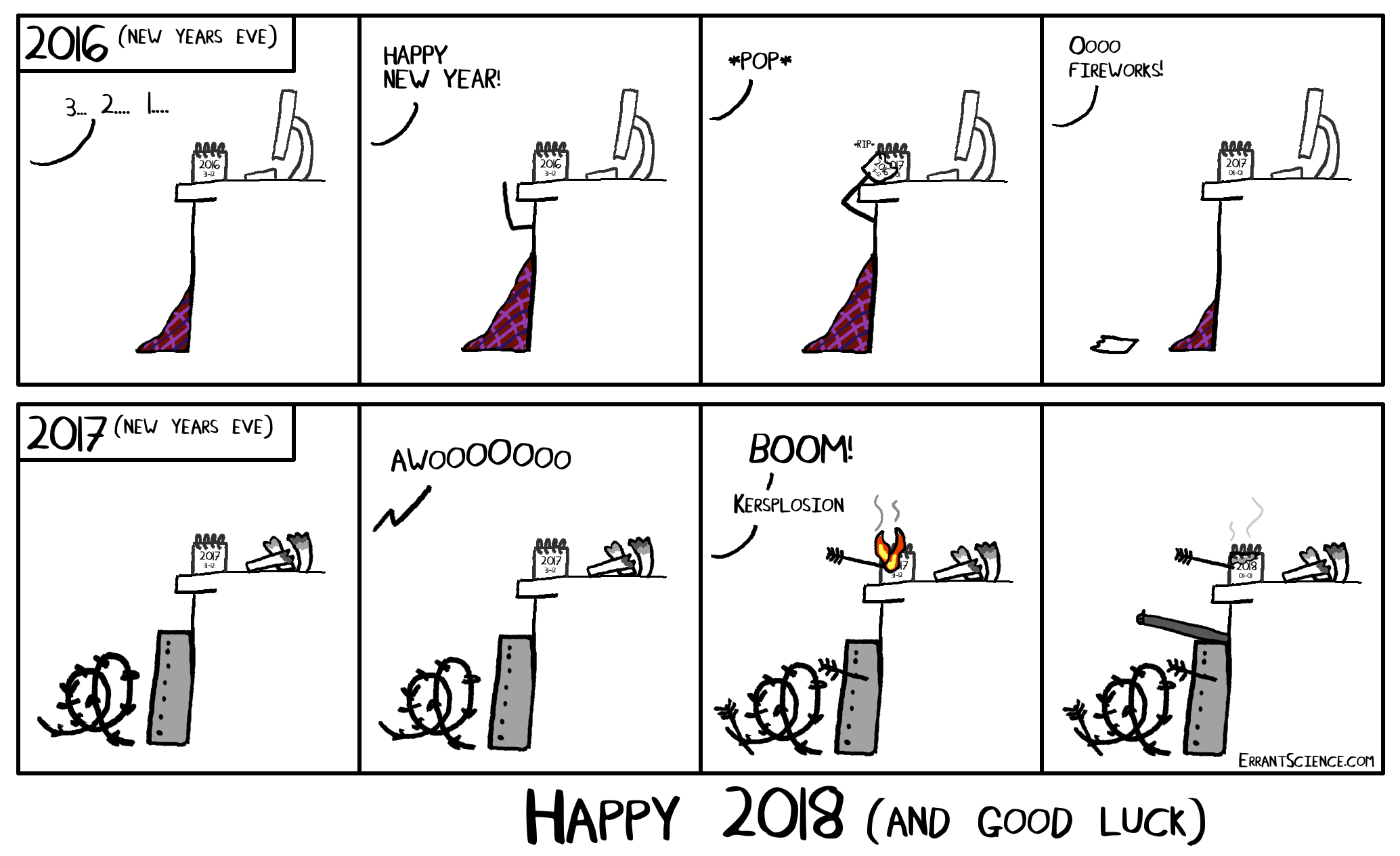 Last year I had a long list of things I wanted to expand into and things I would broadly call “planned”. As you’ve just read many of those went really well and turned into awesome things!

After 2017 the plan is “keep going” – everything else is basically bonus extras!

As I mentioned, Clutter is rocking it. People are reading it and authors seems to be massively enjoying the content and new perspectives on life in science and research. In 2018 I want MOAR Clutter! Probably not more as in more articles because poor Michelle is overworked enough! What I’d really like to do is find other places that the content on Clutter can go. Several people have contact us about syndicating the content from Clutter and I am super keen to try and push for this to happen. If I can use ErrantScience to get the guest authors paid exposure elsewhere that would be amazing.

I really want to do more engaging things with the readers. I have no idea what this really means, perhaps a bit more ‘suggestions from the audience’ or possibly more competitions. Some of the best cartoons last year have come out of random conversations with readers, so more of that would be good.

I’ve started it a bit, but I want to also start a few regular series of articles. The “Terrible Guides” was a prototype for that and is wildly popular and really fun to write. I have a few ideas of things I could do with slightly different flavours so I might try them out for a few articles and see what the feedback is.

As you may know, ErrantScience doesn’t run ads on the site… never, ever. One thing that gets suggested to me a LOT is to get a tip-jar or Patreon where people can donate to us to help with running the blog. In exchange we’d prepare content specifically for the patreons or give them early access to the content we’re putting out. I’m not particularly against the idea, I support several people via Patreon for no other reason than I love their content and I like buying them a cup of coffee every month in exchange for it. I think the biggest reason we’ve not done this is that I’m honestly not sure what exactly the Patreon backer rewards would be! If you have any ideas we’re all ears, but until I know what I’d give people in exchange for their incredibly generous donations I just don’t feel I can take them.

I’m totally fine with you giving us money in exchange for badges and stickers, though. If you want to support ErrantScience then please do that! 🙂