As labs go, it was pretty small – about the same area as a slightly generous student room. There were some very standard lab benches, looking like they were straight out of a catalogue, with a few chemical stains that had probably arrived pre-etched into the top. A continuous bench ran along one wall. There was a large fume hood opposite, filled with far more odd glassware than was probably safe – especially the stuff covered in brown goop that no-one was prepared to either claim or wash up. The floor was made out of a special chemically-resistant blue lino that was randomly flecked with spots of colour, which simultaneously covered up all the small stains and made it utterly impossible to find any small parts which would inevitably be dropped on it.

One wall of the lab was made entirely out of glass – for reasons best known to the designer. Why you’d spend all that money custom building a glass-walled cleanroom was the sort of question that was probably missing from the original planning meetings. A meeting that was probably devoid of any scientists who would have to work in it and suffer the stares of every single person walking past. Although, as it was thickened glass to withstand the positive pressure of the cleanroom, at least the researchers didn’t have to endure hearing the comments of their audience as well.

Opposite the fume hood, on one of the lab chairs, sat a slightly dejected looking researcher – pipette in one hand and his head resting in the palm of the other, in a pose that was alarmingly common to students in labs around the world. The universal expression was a special blend between bored and productive that identified an advanced level of lab experience. Students just starting out in the lab have the giddy enthusiasm of still being oddly fascinated with even something as basic as pipetting. It’s not clear why they are so fascinated with mankind’s invention of the ability to move small quantities of liquid around, but this tends to take at least a week of solid pipetting and a mild case of RSI to cure. 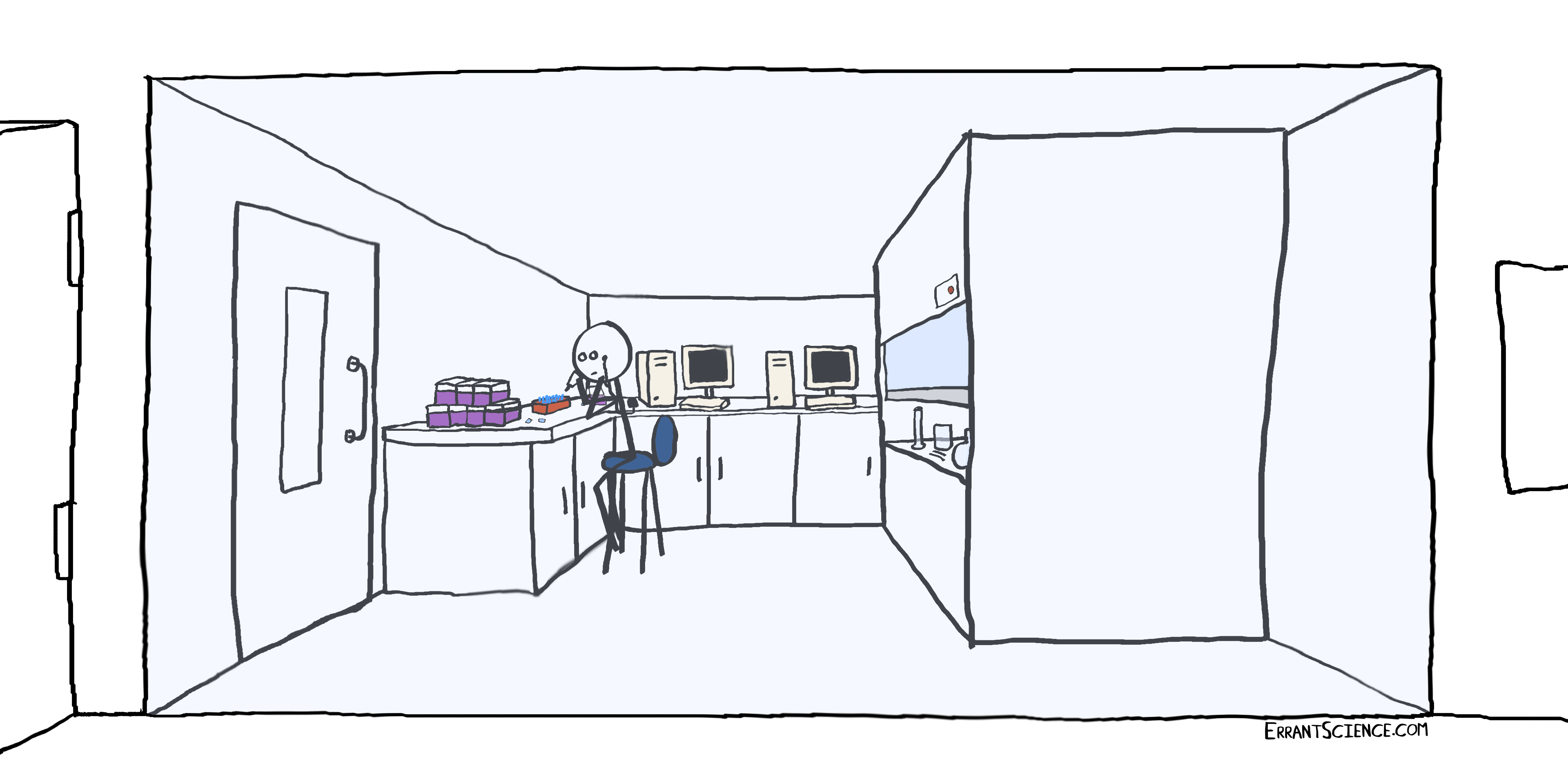 But Joe wasn’t a new student. Joe had been a student (BSc), a student (MSc) again and now a student (PhD) one last – hopefully final – time. In that time Joe’s opinion of pipetting had gone from quite interested to fairly ambivalent to growing resentment in step with his courses. And being only one year into his PhD, Joe was going to have plenty of time to progress from resentment all the way up to full and seething rage. But that’s PostDoc level and still a few thousand pipette tips away…

So there was Joe in his lab chair – stabbing on a new tip, sucking up his buffer, and then pushing it out into one of the myriad of little plastic tubes in front of him, and finally ejecting the tip with a loud click into a gradually filling bucket at the back of the bench – over and over and over again. Occasionally, it might get a bit more exciting and he’d miss the pipette tip and annoyingly jam the pipette head in between the tips with a THUNK. But years of practice had at least reduced this down to happening only 1 in 20 times.

Of course there is still one silver lining to pipetting – the simple pleasure of choosing the tips to eventually create a pattern. Today Joe had gone with slowly picking out the tips to form the shape of the Tri-force, because this was both a very pleasing triangular repeat and because Joe had spent until about 3am that morning playing Breath of the Wild with Frankie.

He had first tried out a few other patterns (like swords and even a Link-esque cap) but Joe was not a pixel artist. Although you’d think, with all the pipette tip boxes he’d gone through before now, that he’d have had enough practice.

The very repetitive click-click-click of pipetting was briefly interrupted by a quiet ‘tut…’ from Joe as the phone on the bench next to him briefly glowed, with a kind message informing him that he had “5% battery remaining”. As a student, Joe was used to what would charitably be described as ‘extended’ hours – which mostly meant he was still in the lab at around eight o’clock at night. Some days were better than others – mostly when something broke… But today was only different because it was now quite a lot past eight o’clock (an hour past to be precise) and even his phone was getting impatient.

After a few more click-click-clicks, Joe put down the pipette and leaned back, trying to decide what to do. The last six experiments that he’d run had been scientifically as useful as checking that water still boiled when you heated it. Normally, this wouldn’t be too much of a problem but those are not the sort of results you want to take to a 1 year review meeting, if you don’t want to suffer the wrath of a frowning professor or the dreaded “well that’s an ‘interesting’ approach” comment.

He could leave now and pick this up tomorrow but splitting sets could cause problems – he’d have to fridge everything overnight and hope that no-one ‘borrowed’ the pipette before he returned in the morning. Or he could stay just another 30 mins, get it finished and go find some disgustingly unhealthy food on his way home.

Joe leant forward, picked up his phone and quickly tapped out a message to Frankie to say he’d be a little longer, put on the angriest rock he could find to try and keep his brain going and picked up the pipette to carry on, with all the enthusiasm of a man asked to pickup a rusty nail and scratch it across a chalk board. Click-click-click…

Of course he’d probably have felt slightly more upbeat if this wasn’t the sixth time he’d done this or if he thought it might work this time or if it was even an experiment which he had designed. Unfortunately for Joe, this was the 6th time (that last time was the 5th and counting is funny like that) and the experiment was most likely going to fail, and no amount of explaining that to his supervisor was going to persuade them that their ‘brilliant idea’ wasn’t quite as brilliant as they had hoped. Click-THUNK-click-click…

Thankfully, this wasn’t the first impossible set of experiments he’d been given to do. Previously, his supervisor seemed to only accept the physical limitations of basic chemistry on about the 7th repeat, once Joe had managed to do every permutation of the experiment – including earthing himself just in case “the static is causing problems”. Although to be fair that was actually the solution to one of the experiments with the balance and that fluffy stuff. Click-click-click…

Just a few boxes of pipette tips later and more than a few daydreams about smashing pots for rupees, Joe finally put down the pipette and exhaled with a relaxed sense of victory. Not only had he finished his experiment for the day (only an hour and a half later than normal) but by chance he’d used up enough tips to leave an almost perfect tri-force in the final box. Joe picked out two tips and threw them into the bin and admired his now actually perfect tri-force. Worryingly, this was the best lab result he’d had in weeks, but Joe decided to just enjoy it and take the win.

Pulling out his headphones, Joe leaned back, relaxed. He still had to leave the vials overnight to incubate and then run them upstairs to be processed, but at least there would be no more click-click-click.

It was just about then that Joe noticed two things – firstly, the constant note of the air handling wasn’t quite right. The normally low drone of the lab air handling system was different, higher, more strained. Secondly, the cold draft from the fume hood was strangely absent. Joe turned in his chair to the fume hood opposite and saw that the control panel had the tell-tale blinking light of a fume hood that was not doing what a fume hood should. The flow had stopped – for reasons that were only known to the fume hood and a £500-a-day repair man, although it’s more than likely the £500-a-day repair man would just fake understanding it before giving it a hefty kick…

Like all university equipment, turning it off and on again from its main power supply often worked as a repair-man free solution. As the power supply was located in the technical lab next door, this vital repair job was normally done by a passing technician anytime they heard it click off. However, they all worked far more sensible hours and had gone home quite a while ago. Joe rolled his eyes and snapped off his very trendy purple nitrile gloves, stepped over to the door and pulled the handle – which didn’t move an inch.

Two things went though Joe’s mind – he had quite expected it to open and thus almost pulled his face in to the door, and really should try opening doors more gently. Also, this door doesn’t have a lock and so can’t actually be locked. While considering these minor problems, Joe looked at the pressure gauge next to the door which showed the current internal pressure of the lab. It looked different from its normal state of a couple of degrees off the baseline, and was now standing smartly upright while quivering slightly.

Like the main character in a trash TV detective show, a moment of inspiration spread across Joe’s face. If there had been a camera filming it would have zoomed in on his eye to show his dramatic realisation probably with swelling music.

He is in a positive pressure cleanroom; it has a big air system pumping air in, and a fume hood desperately hoovering it back out. The system is designed to have a net extra pressure. Without the fume hood to suck air out, the internal pressure had crept up and is now so great that Joe can’t actually open the door. Of course this all passes through Joe’s head fairly quickly, and other than a slightly glazed look you’d have no idea he’d just realised all this.