Joe snapped out of his glazed expression of panicky realisation, turned back to his desk and snatched up his phone to contact security to get them to come let him out. Unfortunately the induction seminar 12 months ago was barely a distant memory, and he now had no idea how to call security from a mobile.

Quickly scanning the university website, Joe waited impatiently for the contact page to load up. Just as the blue website bar filled up excruciatingly slowly, Joe’s eyes widened when the screen blinked to total blackness.

Joe’s eyes then narrowed with quiet rage as his phone then failed to respond to being turned on, or to any other frantic button presses. In retrospect, when the phone had complained about only having 5% battery, Joe probably should have listened and gone and got the charger. It hadn’t exactly kept quiet about its demands for energy – if anything it had got increasingly shouty as its power had drained. But none of that was much comfort to Joe. The charger was in an office on the floor beneath him, and unless it gained Pixar-like sentience and crawled through the vents to his lab, it was probably not going to be much help.

Joe silently cursed the original designers of the lab who had failed to install a functioning normal phone. In the original designs there were probably loads of phones. One at each end perhaps, with a video phone system to talk between labs. But like any building project, as it inevitably overran the original timeline, management were convinced that it was a trendy clever lab design, so all the extras were probably scrapped to save money. Of course this was justified because they could just use the network points as phone sockets – but this bright idea never made it into the parts list for the plans. Which is why the lab bench sported a nice pristine phone with a phone cable that connected to absolutely nothing.

With a slightly more panicked gait Joe stepped back to the door and frantically pulled at the handle. The first time he had tried the door he’d pulled it in a comfortable, very normal kind of way. This time would best be described as desperate: lots of repeated tugging while looking all around the door frame for any sign of movement. Joe switched hands just in case this was a very complex and advanced door that for some unknown reason had some kind of hand preference recognition built into its small and awkwardly shaped metal handle. 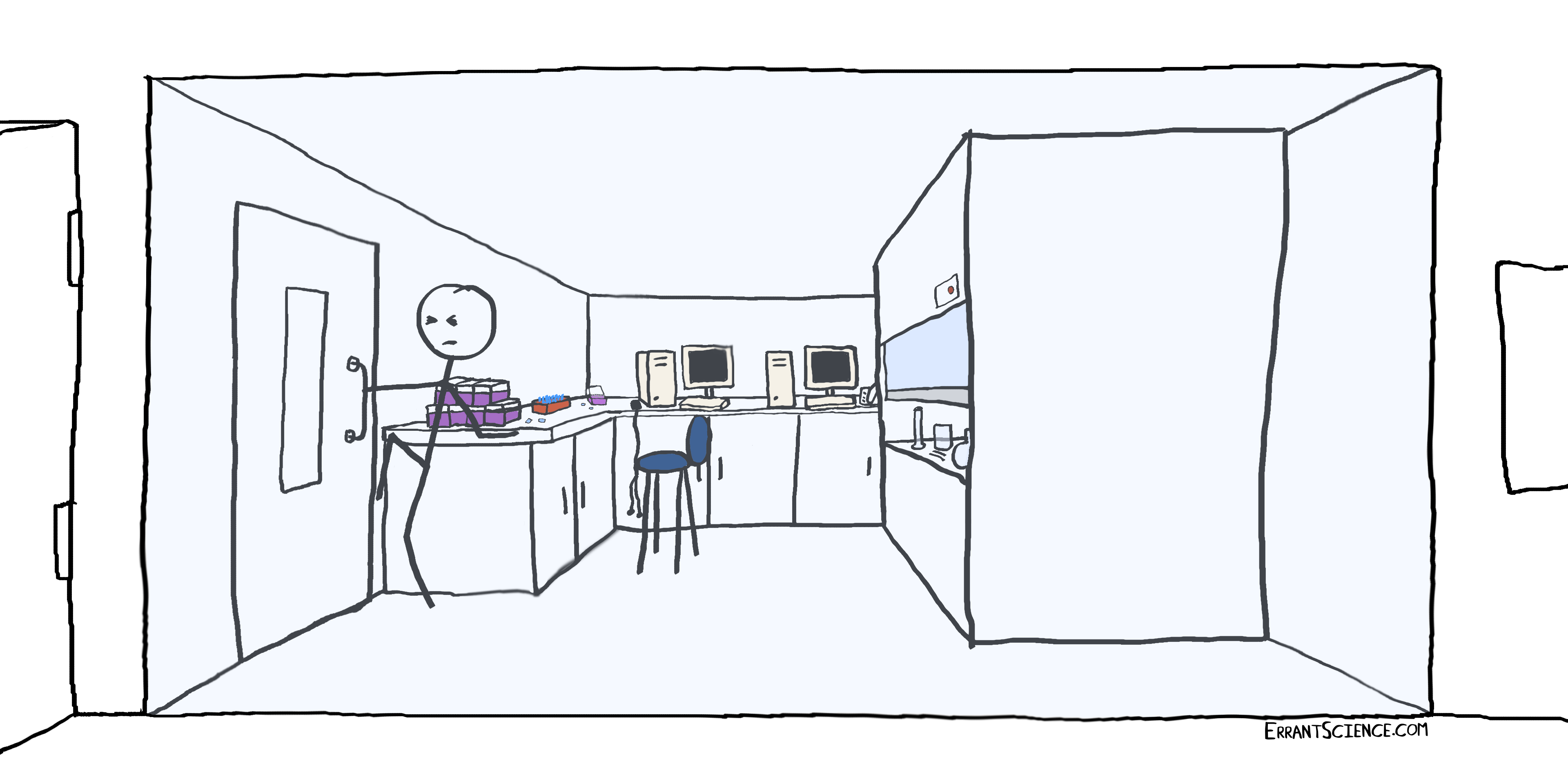 Eventually the frantic door-pulling increased until Joe was bracing himself against the wall with his foot and pulling as hard as he could. This went predictably badly as Joe first put his foot too high, resulting in him nearly falling over, then moving his foot down and promptly losing balance, almost falling against the glass wall. Finally Joe pulled so hard that his hand slipped off the now very sweaty door handle and he collapsed in a very undignified heap on the floor – although sitting on a lab floor is always hard to make look dignified at the best of times; it’s the clear breach of health and safety that really ruins any attempted relaxed poses. In this case though it might have been more to do with Joe’s wild-eyed look.

Staring grimly at the door, Joe wondered if there was anything else around the lab that could help. On the lab bench was a thickish looking cable. He grabbed it, wrapped it round the handle and again pulled as hard as he could. The door continued to sit in its frame, completely unmoved by this inventive use of tools. As Joe leaned his whole weight behind the cable and hung off it with all his might, absolutely nothing whatsoever happened except that the cable made a fairly ominous creaking sound. Joe gave it a few substantial tugs for good measure which were equally ineffective but with the added side effect of putting a nice red mark in Joe’s hand – just before one of the connectors pinged off across the lab.

Out of breath, Joe leaned back on the bench and looked dejectedly at the door with its nice new cable-augmented handle. His grim determined look evaporated and slowly gave way to one of dejected resignation as he started to realise he wasn’t getting it open any time soon. Joe’s mind cycled through a huge selection of wild ideas for opening the door like a roulette wheel, constantly reassessing the small selection again and again. The roulette wheel of ideas eventually slowed down and the small white ball of Joe’s attention bounced around and settled on one of the slightly less bonkers ideas. With absolutely no hope whatsoever Joe stepped back to the door, gripped the handle, took a breath in and pushed…

Sadly this moment of brilliant problem solving didn’t work and the door remained as immobile as it had when he’d pulled it. This wasn’t particularly strange as the door had always been a pull door, and no amount of seemingly clever lateral thinking had magically converted the door into a push one. It was probably not a good sign for Joe’s mental state that his problem solving had got the the point where he was questioning how the door opened this early on. It had taken only a few short minutes to start trying to solve problems like he was in a badly written sitcom – although considering he’d managed to get locked in a lab without a lock, he could be forgiven for this.

With sudden energy Joe spun round and starting scanning the lab for anything else he could use to pry the door open. Surprisingly there was no crowbar lying about ready for just this kind of situation (Gordon Freeman would be appalled). In fact there was nothing stronger than a very thin spatula that could be used to try and pry open the door. As crowbar substitutes go a spatula is quite a way off. Not that this stopped Joe grabbing one and shoving it in between the door frame in the vain hope of somehow loosening the door from its frame. Unsurprisingly the spatula instantly bent to 90 degrees. Joe took it out and meekly tried to bend it back, creating a sort of weird S-shaped spatula which he put back on the bench.

With slightly less energy than before, Joe went from cupboard to cupboard searching for some kind of long-forgotten door opening emergency kit. He was disappointed but not surprised to find that nobody had thought to store such a kit in the lab. In fact the cupboards had almost exactly what he expected to find in them, seeing as he used them every day. In the 4 hours since he last went through them looking for the right reagent tubes they hadn’t magically birthed a selection of door-jimmying rebar. Although if it had done, while Joe would have been able to free himself, it would have raised all sorts of awkward questions about why the lab was able to grow rebar, which would probably slightly eclipse his current issues with stuck doors.

From his cupboard searching Joe was not reassured to find that the sum total of the emergency supplies in the lab was: a small pack of waterproof plasters and 10 bottles of eye wash. It was probably good that he wasn’t reassured by it because if he’d looked closer he also have noticed that the eye wash was 2 years out of date. And everyone knows that the day eye wash goes out of date it becomes lethally poisonous. It’s somewhat surprising that it hadn’t spontaneously exploded – out-of-date water with salt in it is very dangerous stuff. The plasters were not much better – all the usefully small ones had already been taken and all that remained was either the massive plasters for wounds that are clearly too big for a plaster to do much more than be a very temporary barrier for the large quantities of blood you’re probably losing, and those ones that are specifically shaped for fingers but aren’t actually any better than just a small plaster, but have the added feature of being useless everywhere else. Basically a standard laboratory emergency supply kit.

Looking under the fridge, Joe did find a promising piece of metal but only after pulling at it quite hard did he discover that it was attached to the fridge and any further attempts to free it would probably end up with refrigerant leaking all over the lab he couldn’t escape from. Joe gingerly prodded it back to where it was, hoping that would persuade the fridge that he didn’t mean any harm and it was just a misunderstanding and that there could be peace between them. The last thing Joe needed was to fall out with the appliances.

Completely out of ideas, Joe went back to the door and tried it again. This time he didn’t have any delusions of it actually opening, it was just that this was pretty much the default position. The door handle was kind of like a comfort blanket; it didn’t actually achieve anything but it did make Joe feel slightly better holding it. As though at any moment everything would be solved and the door would magically open and Joe would be there ready to leap out before it all went wrong again. It wasn’t so much as unlikely to happen as it was incredibly unlikely to happen. But still it was comforting to do more than just stand in the middle of the room looking worried. Even if it didn’t achieve anything.

Joe pulled at the door again.