With a sigh, Joe’s head slowly fell against the door with ‘bonk’.

He peered through the little window at the cleanroom antechamber on the other side. In theory, the antechamber is designed to stop this very thing from happening. Cleanrooms are designed so that the little antechamber acts to step down the pressure so it is half way between the internal pressure and the external pressure so exactly this kind of thing can’t happen. Joe looked glumly at the cleaning sign that had been used to pop open the outside door, breaking this delicate pressure system. Helpful for letting the floor in the little antechamber dry, not so helpful for being able to actually get out of the cleanroom to enjoy the nice newly clean floor.

But having now solved how he was trapped wasn’t doing anything to help him actually get out. The door was stuck and wasn’t opening anytime soon without some external help fixing the pressure problem. Joe slumped with his back against the door and yet again fruitlessly looked round the room for anything that might help. Maybe he could get a message out instead of trying to fix the setup. Perhaps on one of his previous searches of his lab he’d missed a convenient box of carrier pigeons or a ham radio.

Computers, there were two computers in the lab, computers with possible internet access! Joe sat down at the nearest one and pressed the power button. Nothing happened. He pressed it again and it continued to stare back with all the impassiveness that a powerless computer tower can muster. Peering round the back Joe saw that it was lacking the rather crucial component of a power cable. Joe mentally cursed whoever had selfishly nicked it. Although before he’d even finished inventing horrible punishments for stealing he remembered that it was actually him that had borrowed it some days earlier. He decided to curse that the manufactures had made the power cable so interchangeable instead, clearly this was their fault.

Joe reached round the back of the second computer and liberated the power cable and plugged it into the first one. He pressed the power button and the computer rather pathetically whirred to life and beeped enthusiastically. Joe sat back and patiently waited for it to go though the thousands of seemingly random lines of text whizzing up the screen faster than a human can read. This is the computer equivalent of trying to look smarter than you actually are; this could be easily hidden behind a nice calming picture but then how would you know that the computer is doing things that you have no hope of understanding.

Eventually, the login popped up asking Joe for the ultra secure password that was the last resort preventing illicit access to the computer by any malevolent hackers. As per university regulations this was a 16 characters password with numbers, some capitalised letters and alphanumeric characters. Joe quickly flipped over the keyboard and read the login details off the back where someone had helpfully scrawled the login and then quickly typed them in. The computer continued doing strange computer things, this time with an unmoving hourglass and a default blue screen. 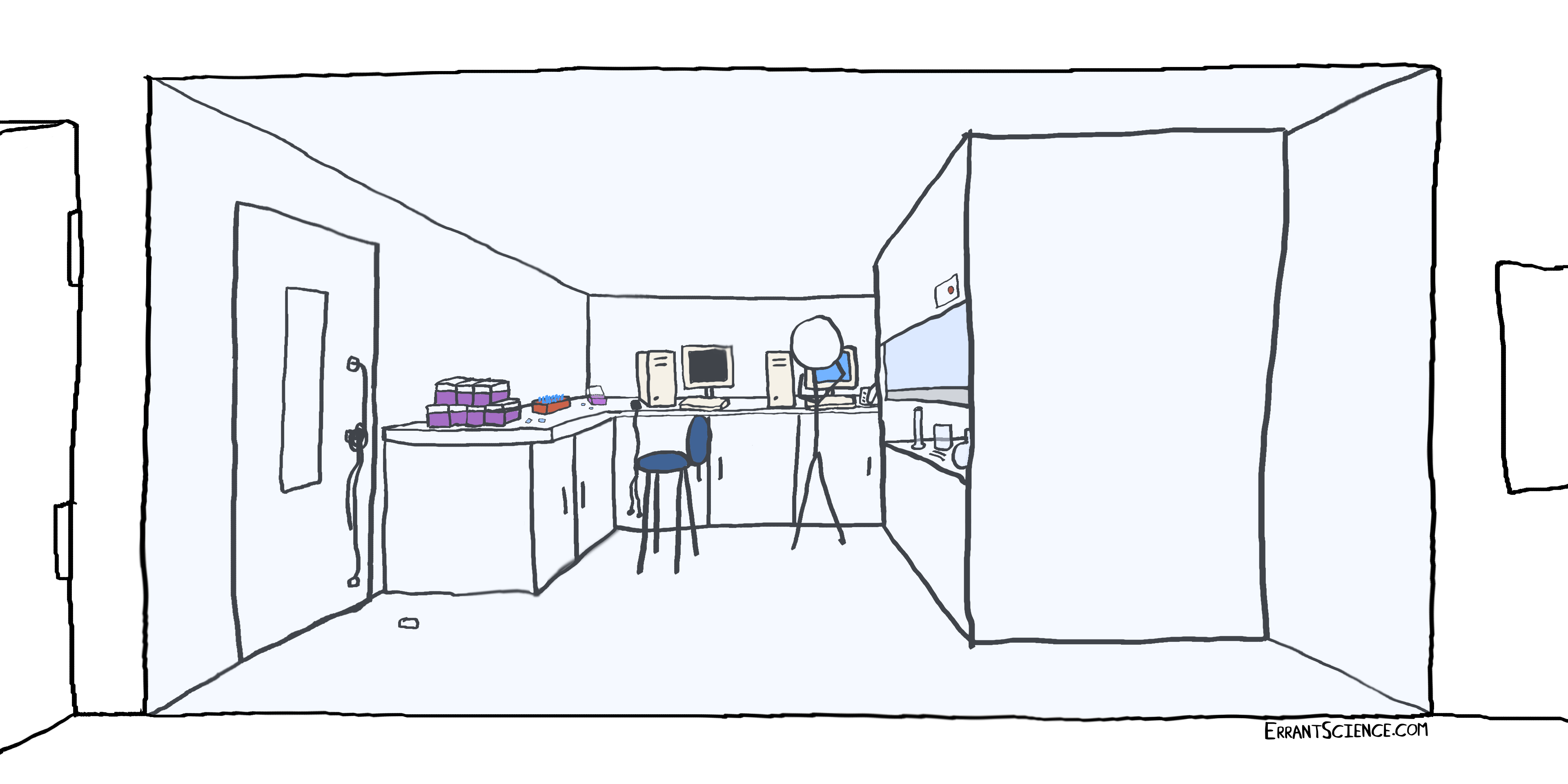 After several tuts from Joe and a few annoyed taps of his feet, the computer finished doing all the computery things it needed and finally released the mouse to his control. Joe quickly booted up Firefox and waited for what seemed like forever for the little blue whirly circle to load up google. Technically Joe did actually wait forever as it never actually appeared. Instead he was shown a “Network connection error” page. With the sigh of a man that has so far had less luck than a Vegas gambler that thought the object of the card game 21 was to get more than 21, he stood up and peered round the back of the computer.

Joe reached round and tugged gently a the network cable running into the machine and followed the cable along the bench, past the network port and into the back of the spectrum analyser at the end of the bench. For the second time since discovering he was trapped in a cleanroom Joe said a word that would have elicited harsh looks from his mother. He looked back to the computer and instantly felt elation and hope at the sight of a wireless network card with a little black aerial poking out the back. Obviously whoever setup the computer realised that locking the network port to running equipment was going to seriously impact their ability to browse Reddit while working and so had installed a second internet connection!

With renewed energy Joe sat back down and clicked the little wi-fi task bar item and loaded up the list of available networks. He watched with giddy excitement as the list remained absolutely, totally and utterly blank. Joe’s luck was proving to, at the very least, be fairly consistent. Even if it was so bad that at this point he was starting to suspect that he was on a hidden camera show. A small part of him suddenly had an urge to look around for hidden cameras.

In quiet desperation Joe clicked on a few more network options and eventually got to the network connection wizard. This helpfully informed him that he didn’t have a network and would he like to go online and check for solutions. With flagrant disregard for the computer’s safety, Joe jabbed at the power button and brought the computer’s consciousness to a premature end. Joe was pretty confident he didn’t do it any lasting damage that wasn’t already due.

With absolutely no enthusiasm Joe stepped across the lab to the second computer and poked despondently at the power button. Nothing happened. Joe went over the the other computer, yanked out the stolen power cable with an overly vicious tug and plugged it back in to the second computer and sat down with a sigh. Well, a sort of sigh. To be honest, given all the sighing so far at his previous failed attempts at escape and communications, it was getting hard to tell the difference between sighs and Joe’s regular breathing; every breath seemed to have some edge of despair. Suffice to say Joe wasn’t extruding joy and happiness right now.

With an excitable beep that was wholly not in keeping with the situation the computer started up and went through a remarkably similar routine to the first one until again the login window popped up. Now this computer was special: IT had not yet fully got its claws into it, so it was setup by the researchers. With no stupid IT security protocols to follow, the researchers had been able to create their own login system and security to ensure that their sensitive data was well protected. Joe typed in ‘Admin’, left he password box blank and hit the enter key, the computer carried on merrily with its boot up routine safe in the knowledge that the user had passed the stringent security test.

Once greeted by a desktop Joe skipped the inevitable disappointment of a browser window and went straight to the network connection thingy which helpfully showed the message “Cable unplugged”. Okay, at least there’s a functioning network card in this computer. Joe peered behind the machine and saw the free network port by a singular lack of network cable. No problem, Joe went over to the first machine and unplugged the network cable to the spectradoohicky thing. Unfortunately a quick look at the end in the spectradoohicky thing showed that it was a proprietary connection. Why you would possibly need to make a proprietary plastic connection for a network cable was a mystery, but Joe was willing to bet that a replacement cable cost considerably more than 2m of network cable from Amazon.

But not all was lost, Joe had already seen a network cable in the lab. He looked round expectantly and eventually his eyes rested on the yellow cable wrapped round the door handle. He eagerly went and unwrapped the cable and looked with absolutely no surprise at the bare end that he had accidentally broken earlier in his efforts to pull open the door. Joe’s mind, which was initially full of mild panic at being trapped and was making nice friends with growing despair, had now invited in a strong sense of regret.

He looked down a the spekley patterned floor and began to scan it for the small translucent plastic connector. He put the cable on the table got down and began delicately running his hands across the floor. Half a second later he stopped when his hand passed over the sticky patch and he remembered that this was a chemical lab and generally running your bare hands over the floor was not a good way to avoid multi-coloured chemical burns. After wiping his hands on his trousers (a well know way of removing any chemical contamination) Joe put on a fresh pair of purple nitrile gloves and went back to running his hands across the floor like a human mine sweeper.

After a few minutes, several strangely coloured patterns on his gloves and the discovery of a surprising number of small screws, Joe eventually bushed against the small plastic connector. Grabbing the cable he sat in front of the computer and carefully jabbed the bare wires of the network cable in to the little holes and hoped that wishes would hold them in place long enough to get some semblance of a network connection. He carefully placed the delicate connector into the wall socket and winced as it clicked into place. Plugging the less damaged end in to the computer, Joe returned to the network connection program and retried the connection which now read “Cable unplugged”.

Joe banged his head into the keyboard and considered what deity he had wronged and if stabbing the computer would appease them.