Joe peered at his lab now only illuminated by the glow from the computer monitor still showing the message “Network connection missing” and counted slowly to 5. This was partially a technique for calming himself down to just a slight simmer of rage but also he thought that he’d wait a few seconds to see if some other hilarious crisis presented it’s self. Maybe a meteor would hit the lab? Or a series of freak circumstances that would cause a lorry from the motorway a mile away to leap into the air and embed it’s self in the lab wall. Somewhat to his surprise none of this happened by the time he reached 5. He took this as a sign that worse things were to come and the universe was now taunting him.

Sitting on the chair in the dark Joe mentally listed all the ways this evening had not gone exactly to plan and stopped fairly quickly when he realised that he was in danger of becoming suicidal. Instead he tried to list all the things that had gone well – he stopped doing this quickly as he ran out of ideas and this had the same effect as the first list. Joe decided that right now making lists probably wasn’t going to be a good way to staying positive. Then again being positive was quite definitely not going to open the door so perhaps he should carry on anyway, at least it was something to do in the dark. Although, speaking of the dark, perhaps solving the dark problem might actually be borderline a good idea.

He got up and gingerly walked over to the bench, rooted around in a cupboard the took out a cheap bench top lamp. The bench top lamp casting the sort of weak beam of light that only a cheap 40w light bulb can muster. Joe looked grimly over his now hauntingly lit lab and looked around wondering if this new light would make it look any better that the last time he surveyed it. Oddly enough it didn’t, if anything it now looked more depressing. Low mood lighting, Joe decided, didn’t suit labs. Labs really only suit glaring fluorescent tubes; standing lamps, for example, look great when placed round a trendy room in a reality TV show but pretty terrible when placed next to an incubator with agar plates in it. That said, a nice throw might work wonders and a couple of scatter cushions wouldn’t go amiss. 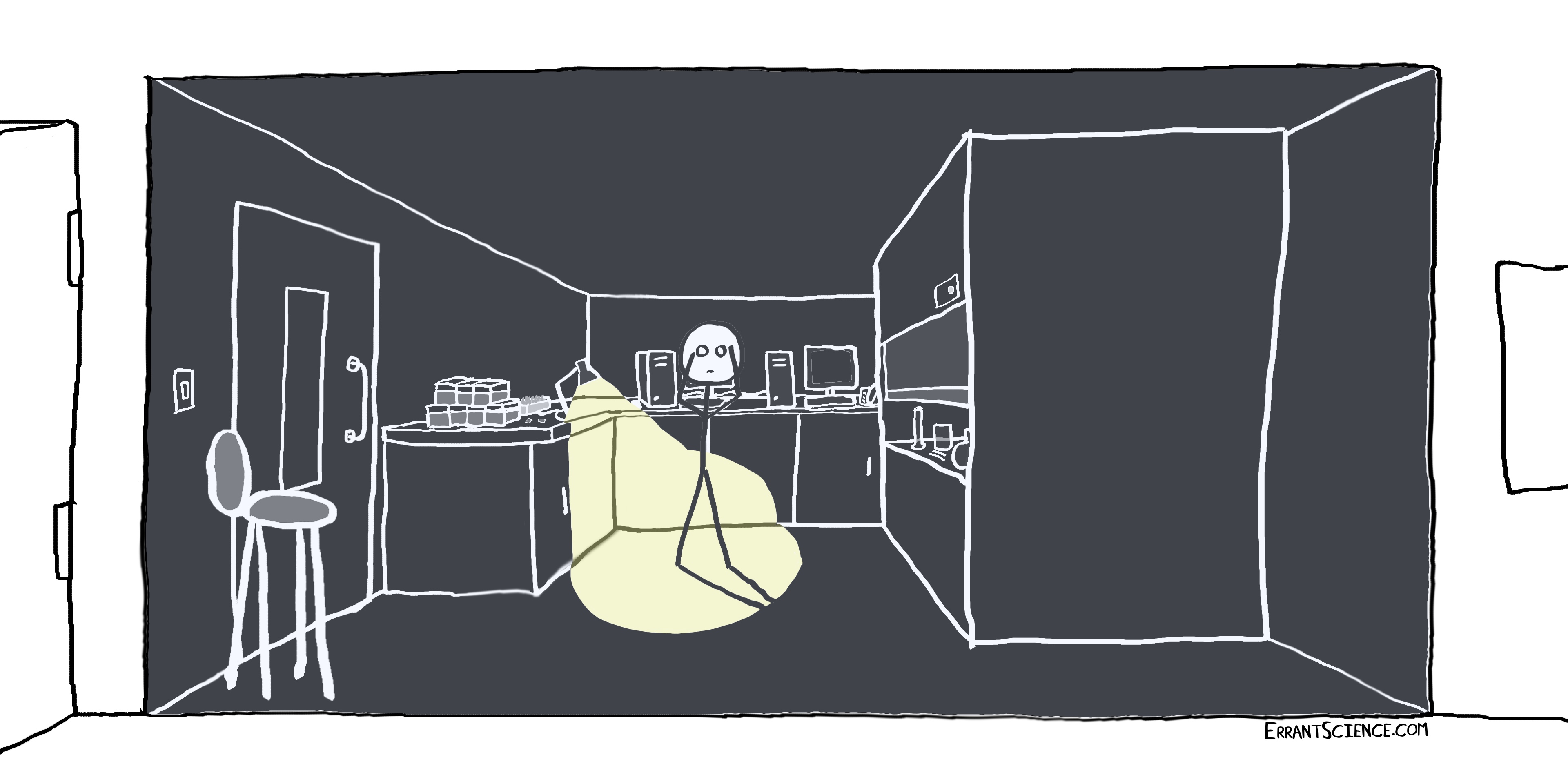 The light filtering through the array of bottles on the lab bench was casting long colourful shadows along the floor and part of the way up the walls. Joe moved the lamp around a bit to try and spread the light better around the room, but every position he put it in seemed to create another horrible set of strange shadows that looked like effects from a low budget horror game. Eventually Joe gave up and left it projecting some horrific pattern of ghostly shapes onto the walls. If there was something missing from his ordeal it was certainly not spooky jump scares. Joe tried to think less of zombie filled low polygon graphics and scary animatronic bears and more about relaxing soft toned lighting. It didn’t work.

Joe considered how many horrible things are in labs – it’s amazing that not more horror films and games are made in them. Hospitals, mansions and abandoned factories with an alarming number of boxes are all mainstays of the horror world, but spooky labs somehow get missed off. The best they get is a small scene at the end when the protagonist discovers that it was the mad scientist in the home laboratory with the green liquid. Joe was reassured that he didn’t have any green coloured chemicals so the likelihood of this being the start of a zombie outbreak was low. Besides, he did have some bottles of blue stuff and that was always zombie antidote so he’d be fine. Oddly, Joe had made those bottles of blue stuff and he should know pretty well that they were suspensions of latex particles and very unlikely to help a zombie infection. But luckily a zombie outbreak was very unlikely for a lot of reasons so it was probably not going to be an issue.

He made his way back over to the lab chair, sat down and peered out of the window, half hoping to see something for all his efforts. Sadly no one else was anywhere near the lab right no so no saviour appeared at the window. Although given the lighting if someone did suddenly appear at the window right now it would have probably been a scary clown or a man in a red stripy sweater with knives on his fingers. As Joe stared distantly out of the window thinking about various creepy things that jump out in horror movies, the computer chose that moment for it’s screen to click off. Joe visibly flinched at the sudden change in the shadows through the window before recomposing himself a second later enough to realise the source.

Joe glared at the computer again and again the computer sat impassively because it had still not yet gained any sentience capable of dealing with this situation, although Joe could swear it was smirking. Trying his best to ignore this Joe fidgeted on his chair and tried to get comfortable. Lab chairs aren’t exactly built for prolonged periods of sitting and are more a place to temporarily rest between time points. If they were built for comfort then the person doing the designing is either very strangely shaped or thinks back pain is someway a desirable thing to have. The most likely theory is that the person that designed the original lab chair was trying to see how horrible he could make the lab conditions before his students quit and it accidentally got made into the default lab chair shape. If Lazy-boy ever get tired of making sofas they could make a fortune by designing the first actually comfortable lab chair. Although in Joe’s case even a Lazy-boy lab chair 2.0 wouldn’t have really helped a great deal as his discomfort was partial caused by his bladder starting to have some serious opinions on his captivity.

Sitting in the antechamber outside the lab next to Joe’s bag were two large cans of Monster energy drink. Two large and empty cans of Monster energy drink. Like most students Joe had a choice of how to deal with the inevitable late nights and long hours that came with being a PhD student. Either eat right, exercise and try to stick to a regular sleep pattern, or drink copious amounts of stimulant laden drinks and eat a diet of sugar and junk food. Like almost all students Joe had gone with option B, which while a little more expensive was quite a lot more fun than option A. Which was unfortunate right now because drinking 1L of energy drinks before running his experiment might have just about kept his brain awake for all the pipetting but it had now passed through and was quite keen on getting back out of his body.

Joe crossed his legs uncomfortably in the vain hope that he could try and find some position where by his bladder would magically double in size. Unfortunately for him that wasn’t going to happen and like it or not he was going to have to do something slightly private in a minute. Good thing he was in a lab where he had an abundance of privacy, which was so far literally the only good side effect of his current status. Although as it is also the cause of the need for privacy this positive really only just about breaks even, just in case Joe was starting to actually feel positive about anything.

After a couple of minutes of quite biologically optimistic fidgeting Joe eventually got up and started searching round the lab. He took out one of the larger pyrex bottles from the glass ware cupboard and looked at it in his hand and weighed up the options, which really were just the one option, as Joe was fairly sure that holding it in for 7 hours was not a decision that was going to get approval from his bladder. Eventually resigning himself to what he had to do he reached down and started to undo his fly when he was suddenly very aware he was standing facing a giant glass window. Now he might be in a lab with no way of contacting the outside world and with almost no hope of being discovered, but that didn’t stop the small hope of someone rescuing him from turning to a fear of them first catching an eye full of things they probably didn’t want to see.  He politely turned and shuffled over to the far corner before doing what he needed to do with only one slightly nervous glance over his shoulder.

A much more relaxed looking Joe turned back into the room and put his ‘fresh’ bottle down on the bench and screwed on a lid. Loosely at first and then after considering it for a second a lot more firmly. He paused looking at the bottle reached for a pen and scrawled DO NOT OPEN on the bottle and then wrote “Joe’s” underneath with the closest thing Joe had had to a smile all night. Finally he placed the bottle on the lab bench near the door, he didn’t want to accidentally leave it in the lab when he did actually get out, explaining it wasn’t something Joe really wanted to have to deal with. Besides he was slightly worried that he’d get hauled in front of an ethics committee for storing human samples in the lab without the proper health and safety forms.