Talk to you experiments

Experiments are complicated and difficult things.

Experiments are amazing sources of unpredictable chaos no matter how simple they seem.

In some ways, this unpredictable complexity is a good thing. Many of those researchers and scientists reading this article have based entire careers on the fact that what they do is complicated and very much needed them and their years of experience or specialist training to do. And more importantly, needing them to be being paid a healthy salary to do it.

But, even with experience and training experiments, there are still mini generators of randomness, even ones you’ve run a 100 times before go wrong in new an exciting ways (exploding in rainbows or making a noise that sounds like ‘flippdoop’). Or more often they go wrong in new and slightly boring ways (leaking grey liquid or very slightly changing the pitch of the hum noise they make).

This makes running experiments very stressful and a source of quite a lot of anxiety. Not least because it can feel a bit like the experiments are doing this on purpose, and with possible malice. Now I’m not saying they are sentient, but I’ve been in too many meetings to count where scientists have blamed some equipment having a “bad day” or it “not wanting to co-operate”.

Blaming the equipment’s mood and opinion about some work is pretty commonplace so maybe we need to try an injection of lab positivity. Don’t treat your experiment like a lurking random anxiety inducing machine, treat it like a lab partner that just needs a bit of a talking to.

Now, plenty of people already talk to their experiments. I’ve witnessed numerous colleagues over the years very loudly talking to their experiments using very colourful words, often immediately after it’s done something it shouldn’t (or more accurately something they didn’t want it to do). 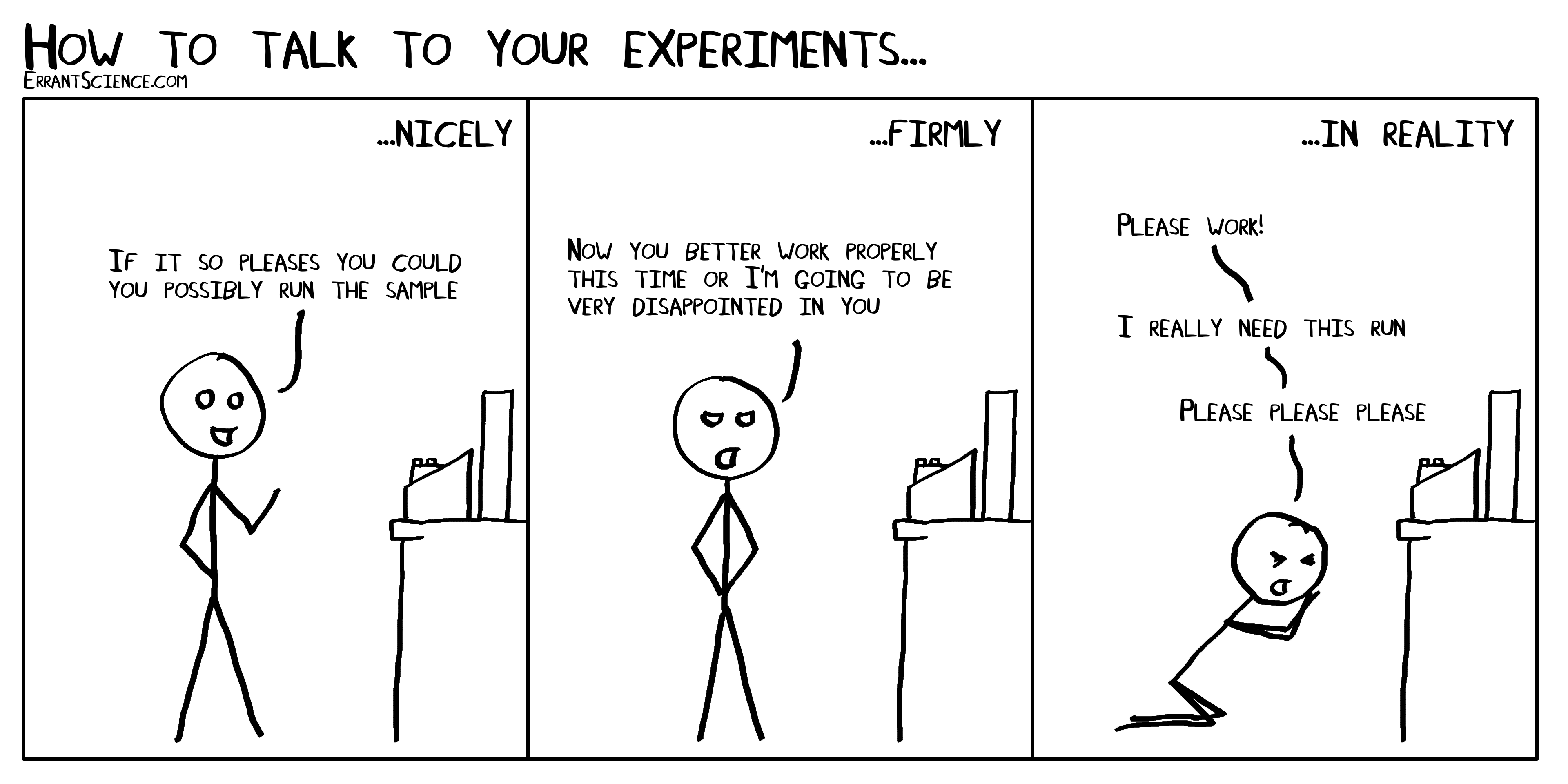 This is not the kind of talking that I’m suggesting. For a start, shouting rarely makes anyone work better, and I’m sure a GCMS doesn’t feel any better about being called something that sounds a lot like a “ducking piece of sugar” than your real human colleagues.

An alternative is doing something that will feel very wrong at first: talking nicely.

For many it might seem very strange saying nice things to your equipment, in fact for some it might even be very strange saying nice things at all. But you need to push past that initial discomfort and look your sonicator straight in the power button and say “I know we’ve had our differences, but you’re a great sonicator and I think this time we’re going to get this sample cleaned just right”

If we are so quick to blame the whim of the equipment for when it does wrong maybe negotiating with the equipment in advance and politely asking it to do the right thing is the way to help these issues. I mean, what harm can it do to whisper to your reagents to “please not explode”. Manners cost nothing, and if you believe your equipment is sentient to act with malice when it goes wrong, then being polite is the obvious solution!

Also, if it turns out that I’m wrong and inanimate lab equipment isn’t secretly sentient (if you add googley eyes it’s easy to suspend your disbelief #GoogleyScience) then what you’ve just done is spending about 5 minutes trying to be really positive about your experiments. If nothing else, being positive makes everyone feel better, even when your experiment is making strange noises and oozing things. The world needs more positivity… even if it’s just between you and some inanimate lab equipment that you glued eyes to.