PhD myth busting 1: Your PhD will change the world and you’re a genius

Within the feedback there were a few threads that I very much wanted to reply to/write about so consider this the start of a series where I answer some of the issues brought up in that comments section. Comments are still open so if you want to add your own PhD experience, go rant away. 🙂

PhDs in the media are a strange thing. The vast majority never get any kind of media attention, and the ones that do either get written up as amazing news stories “PhD student discovered new fundamental particle using only fudge” or suspiciously glowing biopics about people who became famous later.

Even to a prospective student looking into a research group, PhD projects are presented with PhD adverts promising world solving amazing things that will change everything, if only you come to the University of Thingy and do it. I very memorably remember hearing one student I knew being told that their project will absolutely discover a new form of safe bio-fuel production that will end the oil industry.

I thought my PhD would make a difference – Tinus

Gotta say one of the bleakest starts to a comment I’ve read in a while. I think Tinus deserves a collective hug for that one. But it is  pretty consistent with what I’ve heard other students say.

There is a great perception that a PhD project is some towering academic and research goal within which you need to solve world hunger, reverse the poles and teach a potato to dance. Which I guess makes sense if you think that…

One big myth is that only super-smart people get a PhD. – Ann

I think the last time I watched a show or movie where I almost felt like the intellect of a PhD graduate was accurately portrayed was Friends. In almost everything I’ve ever seen the second a character is introduced as having a PhD in any field you can bet any money that about 20 min later they’ll be reversing the polarity on a spectrophotometer to make a gun that can shoot Bose-Einstein condensate ghosts (that’s not hyperbole, that’s the plot of a movie called Spectral).

Ross Geller on the other hand was clever at just two things – palaeontology and knowing when to say ‘whom’. Which excluding knowledge of whom is pretty much exactly how it works.

A PhD isn’t a stamp of approval for “cleverness”, it’s an indicator that you’re competent at executing a research project and generating (a little) new knowledge in the process. No more, no less. – Tinus

To do a PhD in the field of physics you don’t have to be a genius at everything. When you start a PhD you have broad school qualifications, some slight more specific college credits, a degree in a related field, and probably an MSc in a field that shares some of the same key words as your PhD. 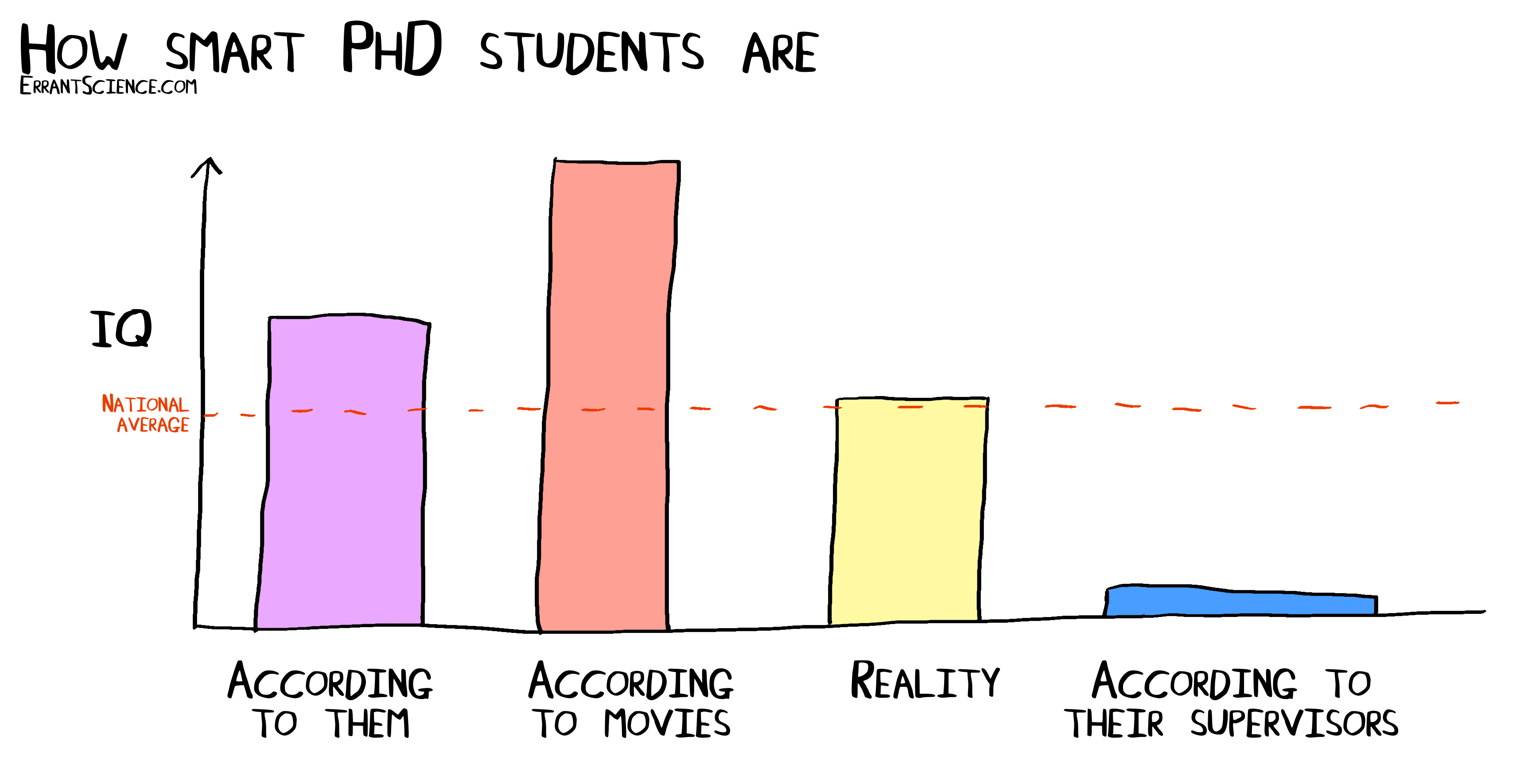 At the start of your PhD you are expected to have a good knowledge in your field and if you are a really good student, some knowledge of how spreadsheets work (I’m horrified how rare this is in 2018).

But something new is not discovering colds fusion. It can be simple and small. All research is small steps and a PhD is no exception.

If you come in expecting to be a one person research team that finally cracks hand-held carbon dating, then you are going to be disappointed.

If you come in expecting to learn how to be a good researcher while adding something to the overall knowledge base, then you are on track. And don’t downplay how amazing that contribution is. You get to the be the first ever person to discover or test a theory that has never been tested before. Considering you are standing on the shoulders of 60,000 years of human history to get to that point I think it’s worth taking a moment to say “holy shit I did this” and maybe worry less about how well it’s cited.

One thing I learned, though already during the lab work for my Master’s, was wondering how many others had already done the same work I was doing, and also couldn’t get any “decent” results so their work never got published…