The life of a Ph.D. student is a strange one. Extraordinary focus can be commensurate with a curious sense of solitude. It can be difficult, at times, to escape that unusual sense of detachment from the world around you as you delve deeper into the intricacies of your research. This is both understandable yet deeply frustrating, as our creative minds thrive on an exchange of ideas.

My discovery of the joys of science Twitter came many years after the completion of my own Ph.D. research. Oh how this discovery has enriched my life, leading to the emergence of new (often completely unexpected) research opportunities and avenues previously unexplored. Science Twitter (and, particularly for me, the delights of spider Twitter) connect me in ways that I could only dream of as a doctoral student during the late 1990s. The conversations that arise are often enriching and frequently surprising. Surely all of this is a mere distraction, however, from the real work to be done? Isn’t it simply one more opportunity for procrastination? Not so, say I!

The human mind is a curious machine, working in fits and starts. Tremendously creative one moment, then drifting into intellectual doldrums the next, the mind craves ideas yet can be inordinately obstinate when we need it most. Science Twitter, whilst undisciplined and often chaotic in its whims, is never less than rich in ideas. The sudden emergence of the #JunkOff meme a few years back provided biologists the world over with an opportunity to educate the world with weird facts surrounding the sex lives of their study species. Moreover, engagement with a global community of the like-minded and, let’s face it, often gloriously weird Twitterati, often kick starts the creative process.

Another enormous benefit of engagement with the science Twittersphere comes from the discipline required to convey your message with only 280 characters. There is always a temptation when writing science to trend towards verbosity. With discipline comes clarity. Although, to paraphrase the ecologist Michael Rosenzweig (2008), whilst clarity raises the chances of being understood, it also makes it easier for people to disagree with you! Curiously, the brevity associated with Twitter’s original 140 character limit has suffered less than expected following Twitter’s decision to double the allowable count to 280 characters in 2017. Indeed, 12 months after raising the character count Twitter reported that 88% of tweets still amounted to 140 characters or less. Such glorious parsimony of language!

Reflecting on my own viva voce, those years ago, I have never encountered a question so vexatious as when asked to rephrase the crux of my thesis in terms readily understandable by a non-biologist. Once again, science Twitter comes charging to the rescue to the modern day viva candidate. The enthusiasm of non-scientists to join the Twitter conversation is a source of constant delight. Answering (often surprisingly perceptive) questions simultaneously challenges and stimulates my scientific mind in ways that conversations with colleagues often do not. Phrasing answers to be concise, coherent and clear is excellent preparation for any viva, presentation or plenary.  Had I, at the time of my viva, been versed in the skills I’ve honed via the Twittersphere today, perhaps I would have answered that question with confidence and not the veneer of panicky sweat that appeared on my brow that day!

[…] This month we’ve featured a fantastic guest writer, Dr Richard Pearce, who writes about his discovery of science Twitter, many years after his PhD, and how it has shaped his science communication and also contributed to […] 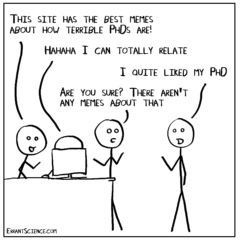