So last week I had the pleasure of attending one of most unusual meetings I’ve ever been at. Normally when I visit other universities to meet other research teams, I am treated to a conference room with fluorescent lights and an urn of coffee. It’s not the fault of the hosts it’s simply all that is normally available. Not many universities have followed Google’s example and let academics have meetings in rooms with bean bags. For a start, I have a strong suspicion that following that model would lead to a lot more snoring in meetings.

But this conference wasn’t held in a beige-walled room with a slightly enthusiastic heating system keeping it at a temperature slightly above comfortable. It was held in a wooden lodge partway up a volcano – which erupted about half way through the event. 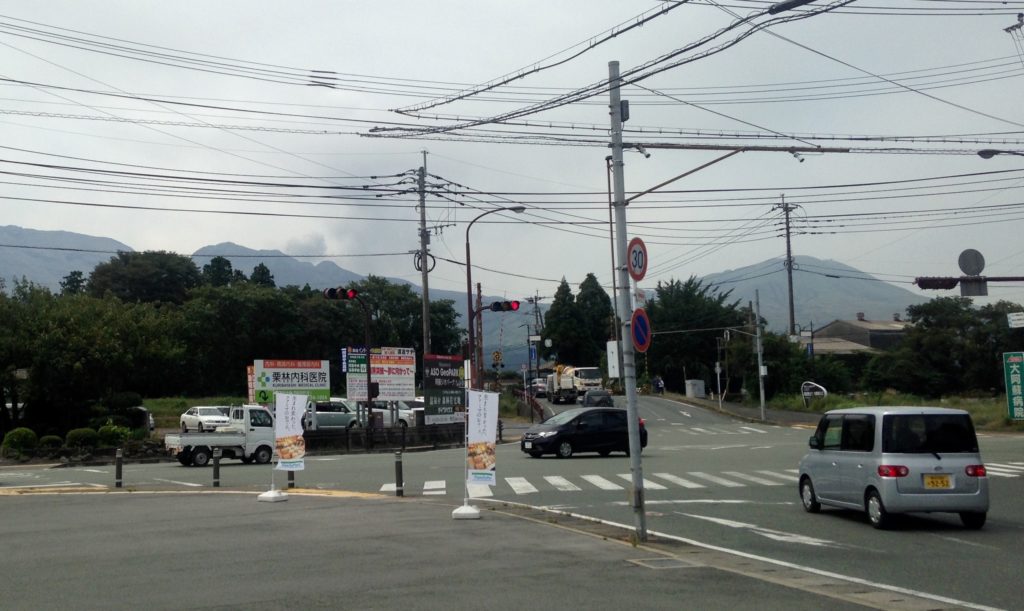 Somewhere behind those wires is an erupting volcano

The current project I work on is a collaboration between three universities; one of which is Kitakyushu in Japan. To try to get the most out of this joint venture we have a one-on-one meeting once a year over in Japan with the whole Kitakyushu University team. In previous visits, we’ve held extended project update meetings and done a little Kitakyushu University specific Lab work. But this time our hosts suggested that we try having a bigger symposium instead. 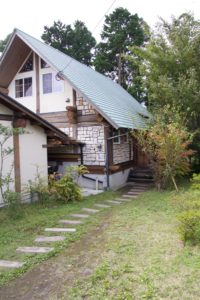 Before I go into the details it’s worth explaining that the group in Japan do this every year. But this time as we were visiting around the time they had planned it, they expanded it to include a slightly bemused group of Westerners.

What they typically do is have an off-site meeting away from the university. And they don’t half arse it – they typically go rent a big house where they can all stay over, bring coolers full of food and drinks, and make it a full afternoon/evening event. The idea is to get everyone relaxed and chatting about their work and perhaps coming up with ideas that might not have been so obvious back in that hot meeting room.

So come Monday morning last week, we all crammed into a mini bus and started a 3 hour drive from Kitakyushu across the Kyushu to a lodge near Aso mountain, arriving some time later at a small collection of wood cabins sticking out of the mountain and shrouded in trees. As symposium venues go it was already looking pretty unique.

The symposium itself was run in the room of one of the cabins, with a small portable screen and projector. Academics from 4 different universities sat on the floor, stairs and a window sill, to watch people present. The Profs and post-docs (me included) presented about 30 mins on what we do and had been asked to provide something that might be ‘conversation starting’. 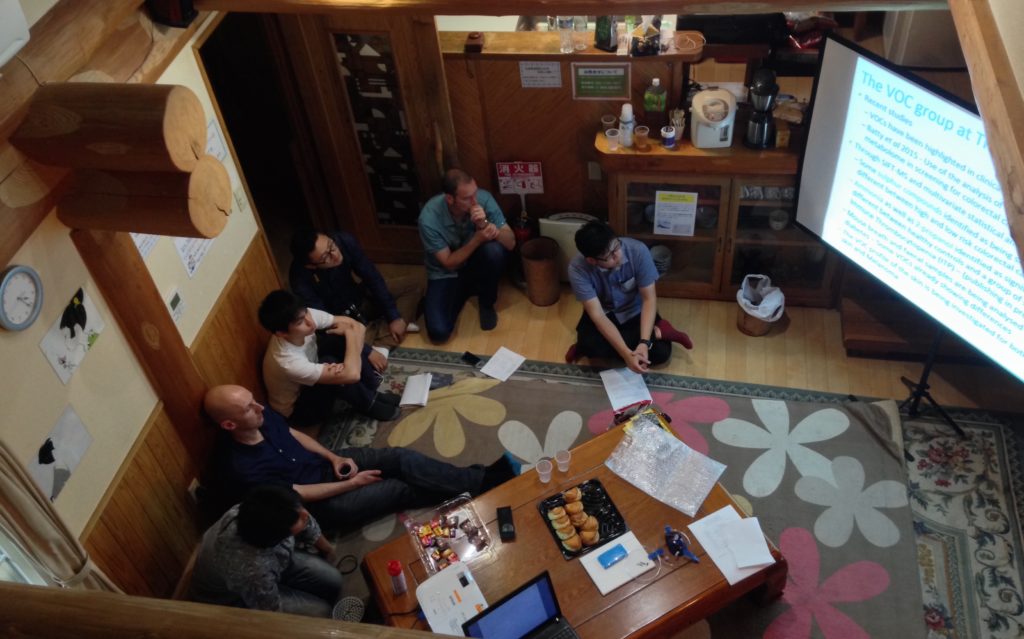 The Japanese students also had 5 mins each to tell us a little about their work and themselves. Apparently, they were under instructions to use at least half the time to talk about their hobbies and life outside of science, which was refreshing and really helped everyone relax and chat. Particularly about the student learning photography with a National Geographic photographer (breathtaking photos) and the student very keen to share his favourite anime show. 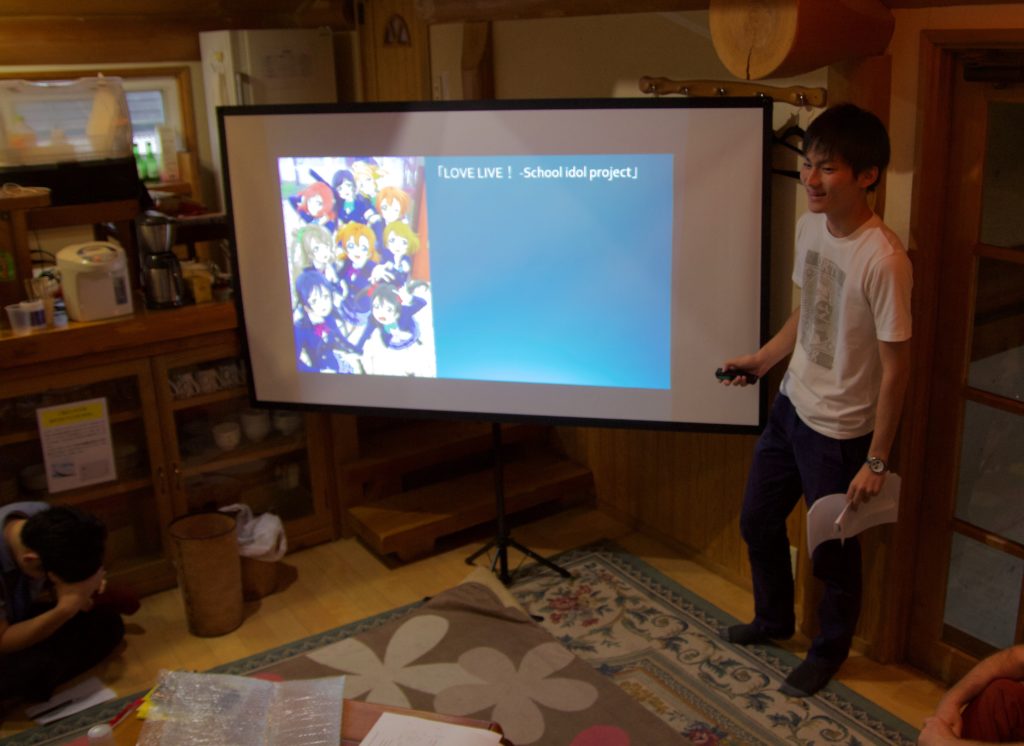 We had a break half way, at about dinner time, which is where the students broke out the BBQ, beer and enough meat to make even the most enthusiastic of carnivore consider asking for a small side salad. The next three hours were filled with relaxed chat about a huge range of topics. Some directly related to stuff that had been presented, some crazy combinations and new ideas spawned from each other’s presentations. Much new science was concocted. 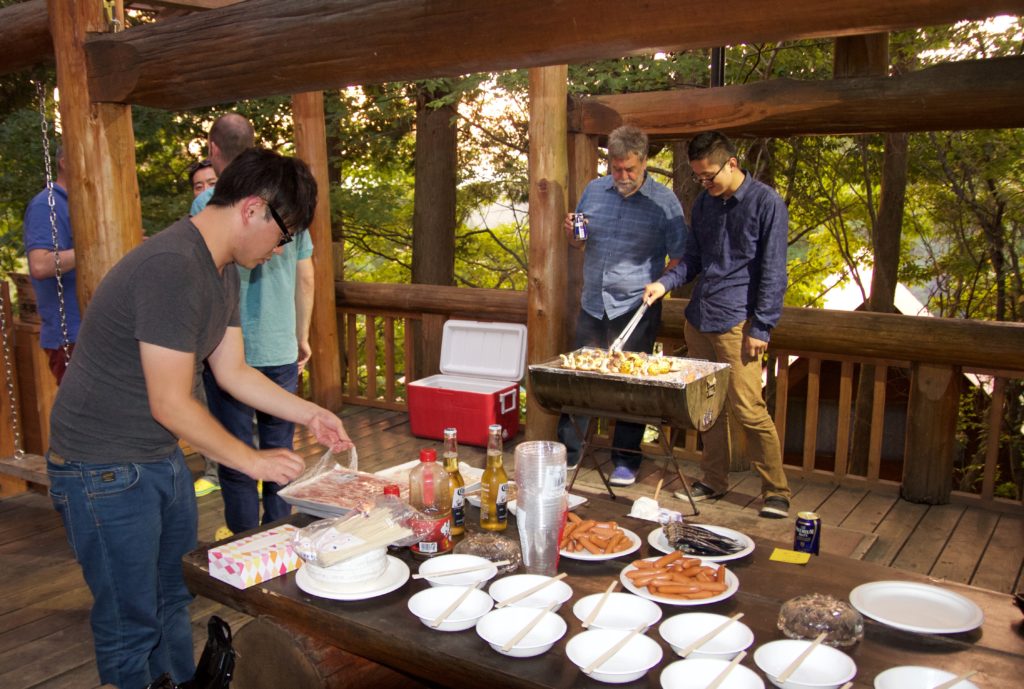 By about 21:00 when the BBQ was smouldering low, the second half of the symposium started up and there were a few more talks to a now very chatty crowd. Eventually it wrapped up around 23:00, as the clear and dangerous alcohols emerged.

The whole thing was a completely new and interesting experience in convincing scientists to apply ideas and solutions to common problems. I have heard of these kind of ‘sandbox- esq’ meetings but where as those are often serious high level events, this was small, relaxed and very productive.

I’d very much like to try the same thing back in the UK on a local scale. Once a year, get together with another university or two and have a summit of sorts. As I’ve covered before, I’m a great believer in viewing a problem from more perspectives, and this seems an ideal way of achieving that.

I do have some reservations – late night BBQs tend to end up being quite alcohol-focused (and not everyone wants to drink) and I know from experience that being the only non-drinker can be a little alienating. But where there’s a will there’s a way, and the idea of trying out non-traditional meetings and other relaxed environments is one I’m certainly going to try.

[…] I covered a couple of weeks ago i recently attended a very different seminar/conference/symposium which was objectively awesome. […]

[…] post content is great but it’s not everyone’s cup of tea. 1000 words on volcanos or hamstercide is asking a lot from someone’s time/attention and the internet is a big and […]

[…] The symposium involved a BBQ and a huge amount of small piles of rice wrapped in black stuff, it was pretty amazing. I think we also talked about science, but that seems to be secondary to me spending the week in a […]