ErrantScience, unlike the rest of the world has had a good year. If I was to sum up this year on ErrantScience in one word it would be “social media”. You may argue that “social media” is two words but again, if we’ve learnt anything this year it’s that social media is not very picky about ‘facts’. 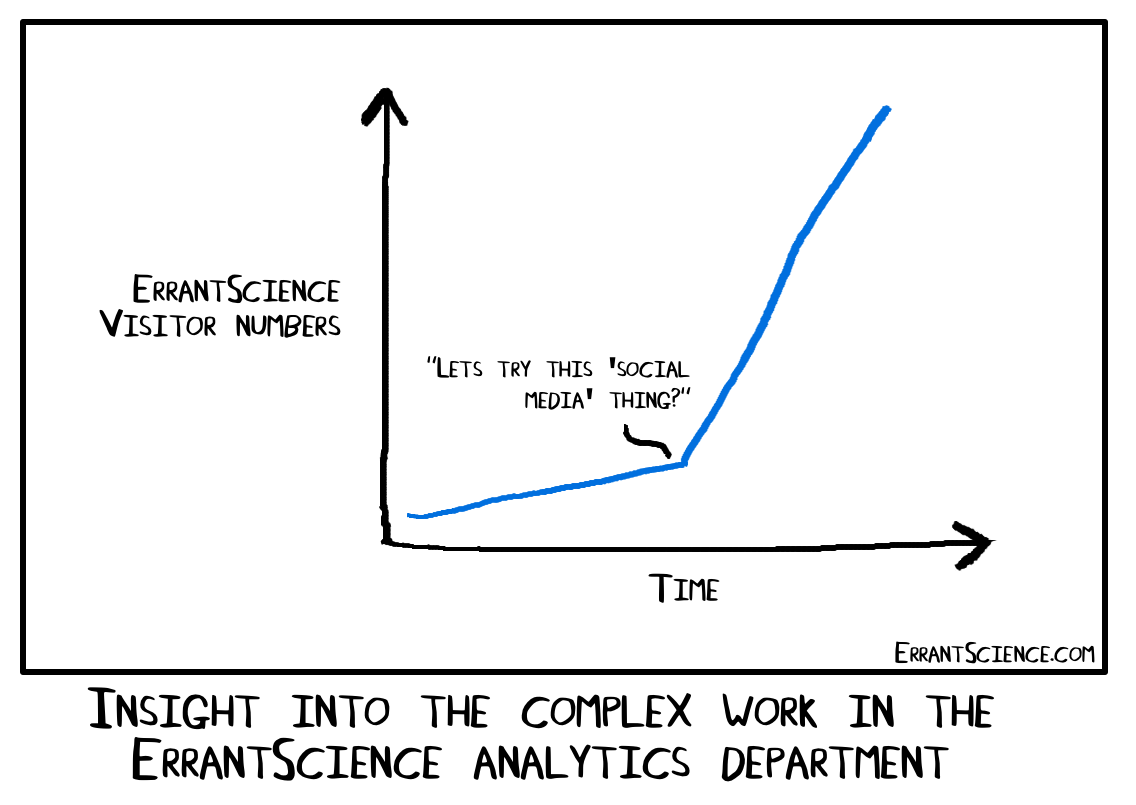 So earlier this year I made an actual effort, both on Facebook and on Twitter to provide dedicated ErrantScience pages people could follow and share from. This was apparently something I should have done some time ago as its effect has been somewhat crazy.

Firstly @ErrantScience has now amassed 2000+ followers, around November it overtook my personal account stats and is still growing steadily. I can’t remember the last time I woke up in the morning and wasn’t greeted by a plethora of likes and re-tweets. Thank you!

Facebook by comparison, is like some unknown leviathan that is slowly taking everything over. In January last year, Facebook made up a measly 10-25% of all traffic. Then I launched the ErrantScience facebook page and within a month, it made up 50% of my traffic and now accounts for 90%. If it wasn’t already obvious, people love them some Facebook.

Over all platforms, I have also upped the rate at which I re-share content that people might have missed. I can’t remember who, but one of my long-standing readers stumbled across some of my archive and was horrified they’d missed it, so I figured people might appreciate seeing some old articles and cartoons pop back up. And I’ve increased the dedicated content rate on social media a LOT. Last year I drew 120 cartoons, this year it was 150 (!!) and about 1/3 of those have not been associated with a blog post.

I tried a few other outlets for content with mild interest. After meeting the awesome @vividbiology I started an ErrantScience Instagram account. It’s not growing followers particularly quickly but I quite enjoyed posting some more behind the scenes stuff on Instagram stories. Tumblr is still a thing. If you just want cartoons it exists and I update it.

I also finally got sorted with a shop this year! I’ve tried it a few times with limited traction. The sticking point was always how much work it took to prep things for the shop. But Redbubble has been super easy and somewhat surprised me with the number of sales you all keep generating (this is super flattering, thank-you).

From my perspective, the most fun I’ve had all year is what I kind of call ErrantScience Live. It’s events where I’ve been asked to go give some ErrantScience talks. I absolutely love doing them and getting to see people laugh at my terrible jokes in person feels fantastic.

Last (but probably best!) ErrantScience had some fantastic guest posts by Helena Ledmyr and Amanda Glaze, who wrote articles so good that one of them is my second most read blog post of the year and the other was syndicated by the Times Higher Education Supplement.

First off, more contract work. I’ve had lots of interest in custom ErrantScience comics, articles, and talks. I love doing all of those things so doing more of that sounds amazing. Particularly the talks, live presenting cartoons and science is basically the best thing ever.

Secondly, stuff! From next year, we’re going to start having things made in bulk and supplying them ourselves. This means I’ll be launching a dedicated store on ErrantScience.com. It also means everything will be LOTS cheaper. So good for everyone. Except probably the ErrantScience editor who now has the additional job of Shipping and Store Manager.

Lastly, more ErrantScience! It’s been a good year (see above) and ErrantScience is rocking it. So why not have more rocking stuff? Well because I only have so many hours in the day and I like to sleep for at least a couple of them. Solution, more people doing ErrantScience! From this year Michelle Reeve will be joining ErrantScience to run her very own sub section called ErrantScience Clutter say ‘Hi!’ Michelle [Michelle: “Hi, Michelle”] – she’ll fit in perfectly…

The whole idea behind ErrantScience Clutter is that it will be a different voice from my own, producing content that might reach a different audience. It’s also going to be a home for guest articles (this year they were SO good I’ve decided we need lots more of them) which we will be pestering people for. I’ve had amazing guest authors and I want to start getting more! When we launch it there will be a blog post explaining everything but this should be a good intro. 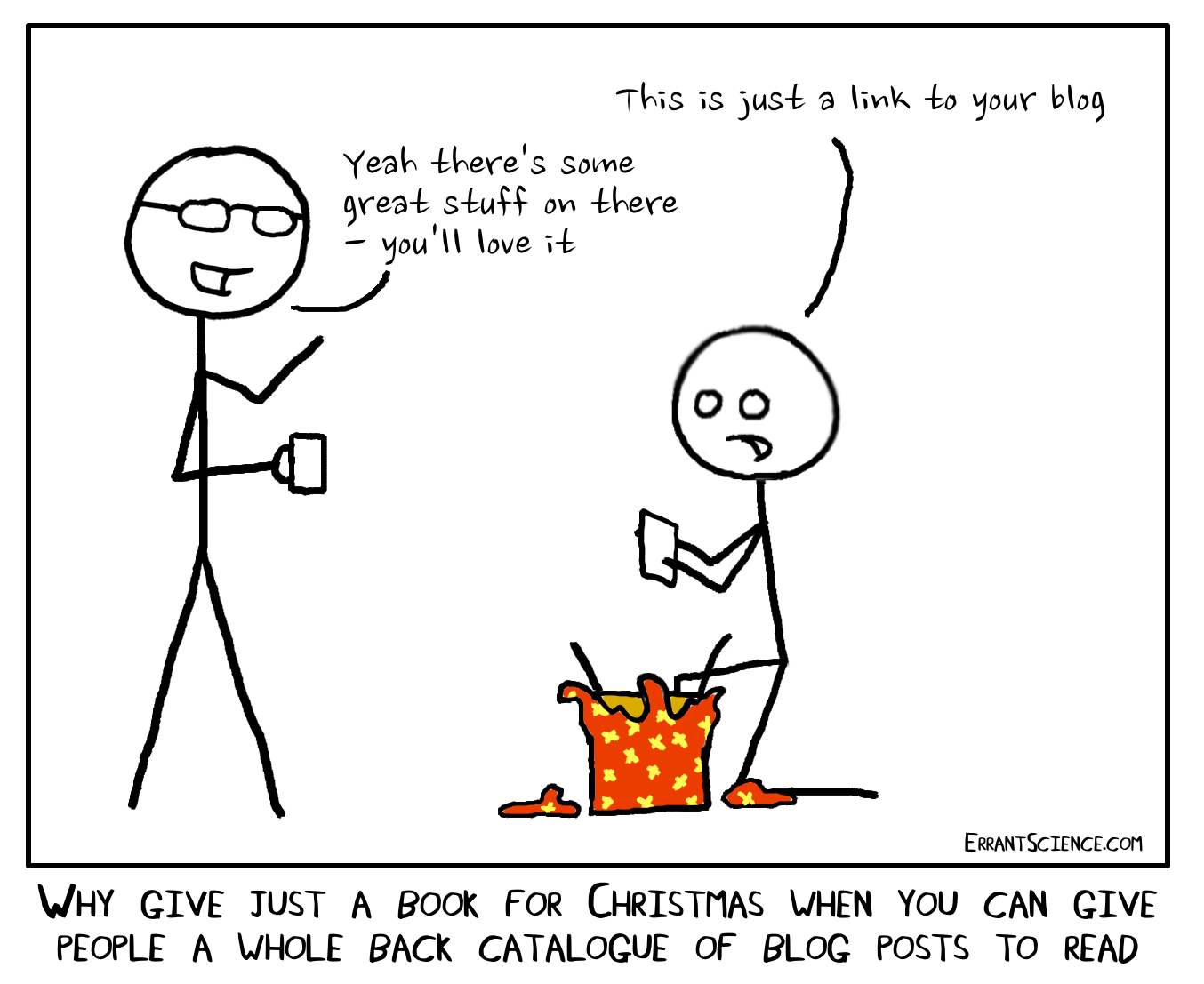 P.S. Special shout out to Prof Hall over at Shit Academics Say who keeps sharing my stuff and semi-frequently almost crashing my blog with traffic.

Congratulations! Very glad I discovered the blog this year – looking forward to more fun in the coming year. Happy 2017 to you!

Thanks Fiona, thanks for the support 😉