Should all researchers be on social media?

Wow – this might be my shortest article yet. Good thing I’m not paid by the word… or at all.

This question comes up a lot when I talk at universities, conferences and events, and as much as I’d like to stick to a glib reply I think my opinion deserves some explanation.

Now, I’m hardly social media phobic. I am very active on at least 3 platforms, I have accounts on about 4 more and if something new starts making waves, you can be damned sure I’ll have an account and have sacrificed all my personal details for the chance of trying it out.

For me, the case for using social media is a strong one. When I started using it I did it because I wanted to promote my work further than just shouting loudly from my lab window. The idea that a new account with 15 followers  was actually going to help publicise anything is now, in retrospect, adorable.

What being on social media did do almost immediately was give me a great sense of community and helped me feel less isolated as a researcher. Being in a lab can sometimes feel pretty isolated and social media became an amazing place to talk to other researchers. Mostly, these conversations are not about solving complex researcher problems but just bonding over broken equipment, late orders or simply having a bad day. But it honestly really helped me as a young isolated researcher feel connected. 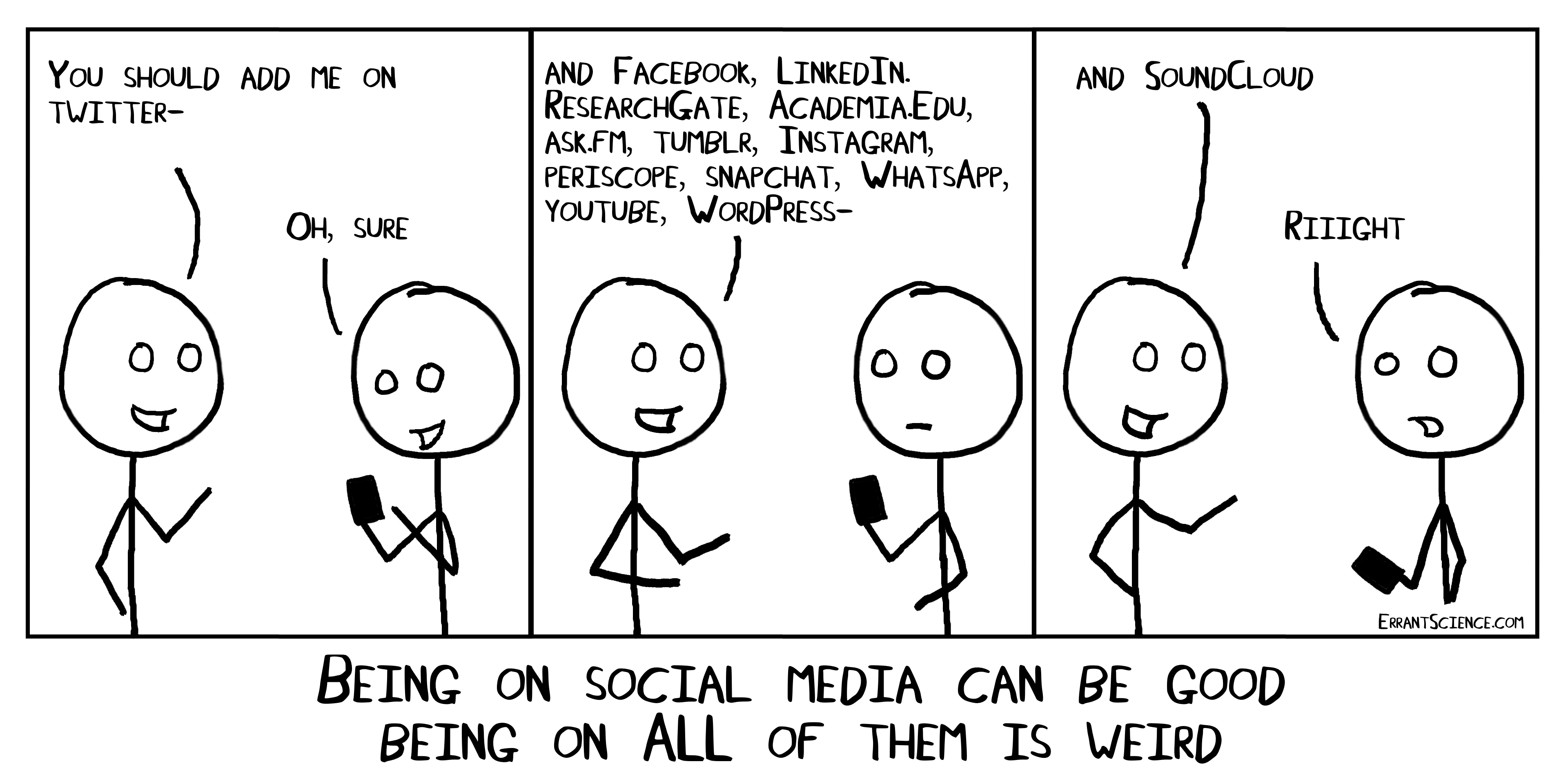 But, as you may have guessed from my succinct answer to the initial question – I don’t think social media is for everyone.

As I’ve laid out, I love social media and all it does. I understand social media, it just works for me. It doesn’t work for everyone.

Firstly, being active on social media isn’t a zero-effort outreach tool. It takes time, thought and energy. More so at the beginning while you are still working out what you are doing and how to best share your work and communicate with others. Choosing what content to share and how to share it seems simple when others do it well but is difficult for someone looking at their own lab filled with hundreds of sharable moments and objects.

To choose to ‘do’ social media is for some people a choice about not doing something else, to make room in their schedules. And it’s okay if they want to do something else because…

Social media isn’t the only way of sharing your work or connecting with other researchers. I know many people who are fantastic communicators either in public, in videos or via their writing, but not on social media. Those formats reach different audiences and take different levels of input that better match the researchers’ skills or passions. Just because a researcher isn’t sharing their work on social media doesn’t mean they aren’t contributing to public engagement. It just means that they don’t want to contribute to that particular form of public engagement.

I’m not going to name names but I’ve seen universities with social media policies that include such wording as “Researchers must attend social media training and take an active part in sharing their work via one or more networks”.

Don’t make people do things they don’t want to do. Support the people doing things they love doing and you might encourage more people to try it out for themselves.